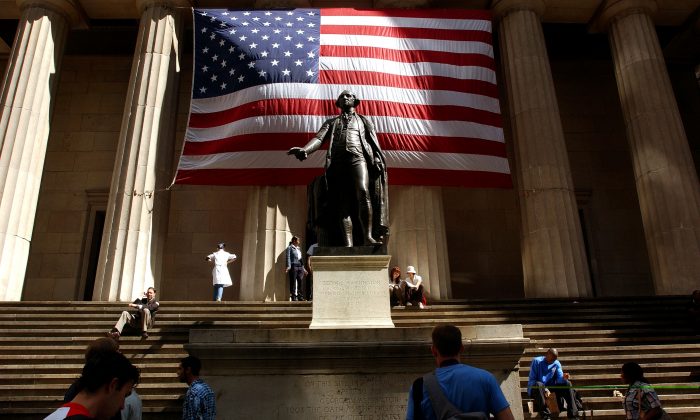 An American flag is displayed behind a statue of George Washington in a Sept. 2002 file photo in New York City. (Spencer Platt/Getty Images)
Viewpoints

I live in a small, faith-based college town. Ave Maria University, Florida, is formally Catholic, and the town is informally but predominantly so. The iconic parish church is at the heart of the town, physically and spiritually. So no one was surprised by the experience of a new undergraduate the other day, just settling in.

This new undergraduate reported, on the town’s closed Facebook page, that she had been having trouble getting her new credit card set up and could not get it to work at the grocery store. She had been running on cash, of which she was now out, until she obtained a debit gift card. The card did not go through at the grocery store register. The lady behind her in line, whom she did not know, paid for the young woman’s groceries.

The new college student addressed her benefactor on the FB page, telling her how grateful she was. “If you let me know who you are, I would love to bring you some of the cookies I’m baking from the groceries you bought for me. I prayed for you on my way out of the grocery store. There is no way I could fully thank you for your act of kindness. So thank you.”

A similar spirit of mutual help and support in Ave Maria received national attention a year ago, when Hurricane Irma hit hard. There were many stories of neighbor helping neighbor (putting up the heavy storm shutters, for example); of townspeople joining together to provide extensive help and food to our neighboring and even harder hit town of Immokalee; and of church and university providing shelter to people who had to flee their homes in face of the oncoming storm and found the public shelters full.

I mention this, not in the spirit of local boosterism or to suggest that there are no problems in our community. I make just two points.

First, we see here the exercise of a virtue, of people coming together to help each other. In our book, “Social Justice Isn’t What You Think It Is,” the late Michael Novak and I used the term social justice in its original sense, to name this virtue, the virtue that inclines individuals to come together for the common good. Practicing the virtue does not depend on the state or require making claims on the state for new programs or public spending, though it does not exclude those things. It is the virtue of civil society, of voluntary association, of democracy.

Robert Putnam’s classic “Bowling Alone” describes in detail the loss of a rich associational life in the United States. There has been a decline of the civic engagement, of the art of association that Tocqueville saw, in the mid-19th century, as being at the heart of democracy in America. Instead, we have an atomized individualism that places personal consent, in marriage and family as in economic relations, above mutual loyalties and obligations.

Paradoxically, such hyper-individualism—a view of justice that stresses my claims on the state above my obligations to others—leads to hollowing out of the space between individual and state, a weakening of civil society.

The other side of the coin of such individualism—the kind that dismantles the natural relations of families and communities, parents and children, boys and girls, husbands and wives—is the expansion of an ever-more coercive state and its intrusion into every aspect of family, educational, and social life. The bureaucratic replacement of such terms for natural relations as mother and father by such terms as parent 1 and parent 2 is a telling example. Teaching gender ideology to young children in public schools, erasing the differences between girls and boys, and requiring parents and teachers to accept children’s subjective view, of the moment, of their own sex or “gender” are examples of how deep and far gone is the penetration of the state into family life and civil society.

Secondly, these apparently random acts of kindness are not as random as they seem. The injunction to “practice random kindness and senseless acts of beauty” was coined by California writer Anne Herbert and evolved from something she wrote on a placemat in 1982 and published as a book in 1993, and reprinted in several editions since then. It gave voice to a charitable impulse in many people, expressed in groups and events around the world, but apart from organized charitable activities of religious organizations and the states to which they had become tied by funding and bureaucratic rules.

But for the faithful of Ave Maria, the impulse was a personal and communal expression of faith, a natural expression of the community. As an exercise of the virtues of charity and social justice, it was expressly religious in motivation but arose outside the routine channels of organized charity in the church and community.

We know from a mass of research that such giving of time, treasure, and talent in more and less organized forms is not randomly distributed among communities and nations (see especially the work of Arthur Brooks on this).

More broadly, some societies, communities, and neighborhoods make it easier to live well than others. Some things inherent in the structure of a society incline individuals to behave virtuously, to build the norms of reciprocity, trust, and social networks beyond the family that make a thriving civil society possible.

The absence or decline of such features makes it harder for humans to flourish as individuals and in communities, economically as well as spiritually.

Paul Adams is a professor emeritus of social work at the University of Hawai‘i and was a professor and associate dean of academic affairs at Case Western Reserve University. He is the co-author of “Social Justice Isn’t What You Think It Is,” and has written extensively on social welfare policy and professional and virtue ethics.