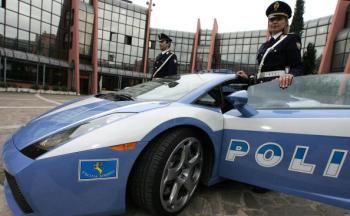 A Jewel of the Italian Police Force in for Repairs

By Dana Betlevy
Print
ROME, Italy—Saturday night proved an embarrassing evening for the Italian state police, when a Lamborghini Gallardos used by the police was seriously damaged in a street incident.

Two guards were on board the luxurious vehicle, coming from an exhibition where the car was being shown in Cremona. Before entering on the highway to return to Bologna, another vehicle pulled out in front of them while leaving a gas station. The driver of the Lamborghini turned abruptly to avoid a collision, hitting two other cars that were stationed nearby, according to Italian media Tgcom.

The two agents were injured, but not seriously. However, the car was seriously damaged.

Is not necessary to be a great lover of cars to know that Lamborghini is a brand of very expensive cars. This car was donated to street police by the manufacturing company, headquartered in Sant’Agata Bolognese, and was used in cases of medical emergency.

It’s a jewel of Italian police patrol cars: the Lamborghini Gallardo—a super sports car used by street police, of which the Italian police have two of its kind in use. A built in refrigerator allows the vehicle to be used to transport organs and blood, and it is equipped with an automatic defibrillator for first aid in cases of cardiac arrest.

The model involved in the accident has a 5000 cc engine, 500 hp, maximum speed of 192 mph, acceleration time from 0 to 62 mph in 4.2 seconds, and comes with ceramic brakes, according with www.webluxe.net.

The car will be returned to the manufacturer for major repairs, and then reinstated, according to Tgcom.