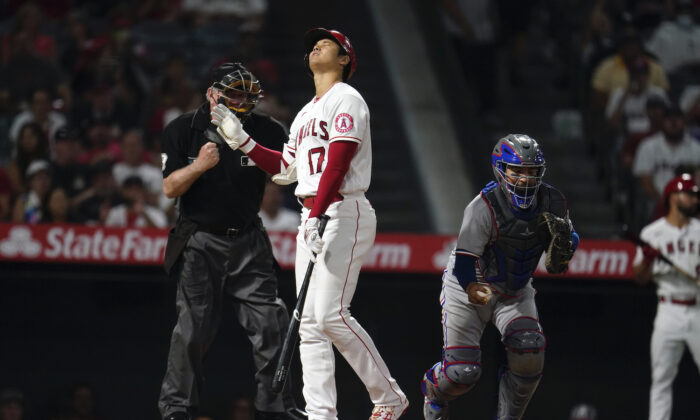 Los Angeles Angels' Shohei Ohtani reacts after being called out on strikes during the sixth inning of a baseball game against the Texas Rangers in Anaheim, Calif., on Sept. 6, 2021. (AP Photo/Marcio Jose Sanchez)
Baseball

ANAHEIM, Calif.—A.J. Alexy managed to follow up his outstanding major league debut with something even better. Two starts into his career with Texas, the confident, rangy right-hander has made history by throwing 11 scoreless innings of two-hit ball.

He’s even been good enough to stir some optimism and excitement at the end of the Rangers’ fifth straight losing season.

Alexy allowed one hit over six dominant innings, and Jose Trevino drove in two runs in a 4-0 victory over the Los Angeles Angels on Monday night.

Alexy (2-0) retired his final 13 batters and didn’t permit a baserunner after the second inning, improbably improving on his impressive debut last month. After pitching five innings of scoreless, one-hit ball against Colorado, Alexy is the first pitcher in modern major league history to go at least five shutout innings while allowing fewer than two hits as a starter in each of his first two career appearances.

“There’s still a lot of stuff that I can work on, but it’s definitely a good start, and (I can) build off of that,” Alexy said. “It’s been a lot of fun.”

Alexy finished with a flourish by striking out the side in the sixth, giving him seven strikeouts on the night. The last two were stunners: He fanned David Fletcher, who’s second in the majors with 10.7 at-bats per strikeout, and then home run leader Shohei Ohtani.

“The most impressive part of it was going into the sixth inning, he was at that threshold of pitches, but I just wanted to see how it looked,” Texas manager Chris Woodward said. “Strikes out a hitter who doesn’t hardly ever get struck out, and then strikes out one of the best hitters in the game to end it. That’s impressive.”

Alexy, who pitches only out of the stretch, is a former Dodgers draft pick acquired by Texas in the long-ago trade for Yu Darvish. Alexy had never pitched above High-A before this season, and is only in the majors because of the Rangers’ COVID-19 problems — but he has heartily seized the opportunity.

“If you were at that game, you couldn’t tell that was his second big league start,” said Trevino, who caught Alexy for the first time. “He looks poised. He looks like nothing affects him, and honestly, it’s like when runners get on, he gets stronger, and as the game goes on, he gets stronger and stronger. … I was a fan, I would be super-excited. I know I’m excited as a player.”

Alexy won a duel with Jaime Barría (2-3), who started out with two rocky innings before retiring 14 consecutive Rangers. Barría yielded eight hits and three runs over seven innings, but remained winless in six starts since July.

“I thought he was really good,” Angels manager Joe Maddon said. “He was a little unlucky, actually. He had an opportunity to put all the zeros up himself. They didn’t really hit him hard at all. I thought he really threw well. Unfortunately, so did their guy.”

DJ Peters and Yonny Hernández drove in early runs before Trevino added an RBI double in the seventh and a run-scoring single in the ninth for the last-place Rangers, who split the four-game series with two straight wins at Angel Stadium.

Jared Walsh had two of the Angels’ five hits as they bookended their nine-game homestand with shutout losses. although they went 5-2 in between.

Walsh’s leadoff single in the second was the Angels’ only hit off Alexy, who also walked two batters in the second before stranding two runners to end the inning.