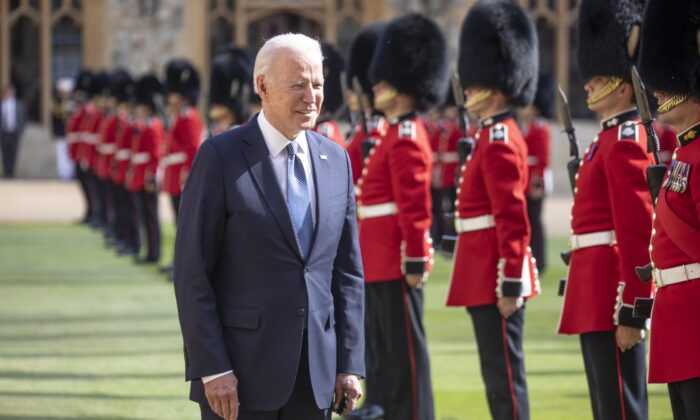 A Hope and Prayer for the Biden Administration

After five months of the Biden regime, and as one who foretold that it would be an unmitigated disaster, apart from a somewhat quieter ambience around the White House, I present the best argument I can in favor of this administration. I do not really believe much of what follows, but I believe that it is possible and I hope that it is true.

The president came into office at the head of a ramshackle coalition of contradictory elements, a little like the new government in Israel, united only in their dislike of the previous leader. Because the platform upon which he was elected was a so-called unity program agreed to by Senator Sanders and himself, Mr. Biden permitted the radical socialist agenda to be bandied about and it seemed to be the administration’s preference for enactment.

The $6 trillion inundation of stimulation money, the radical constitutional agenda of House of Representatives Bill One and it’s Senate equivalent (the abolition of voter verification, the encouragement of ballot-harvesting, taxpayer-subsidization of political contributions, replacement of the judiciary by partisan electoral commissions, and the vast extension of election day to over a month) as well as the packing of the Supreme Court, the reduction of the required Senate majority to 51, and the appointment of four permanent Democratic senators through the statehood of the District of Columbia and Puerto Rico: all this appears to be stalled.

Biden has made most of the necessary gestures and avoided the opprobrium of the far left of his party but hasn’t actually done anything terribly radical up to this point apart from some executive orders.

It is conceivable that Biden is like French president Francois Mitterand, who was elected in 1981 as candidate of the Federation of the Left whose largest component was the French Communist Party, and put four communists into relatively innocuous portfolios and then, as the government’s popularity slipped, sacked them all and purported to run from the center having blamed every unsatisfactory development on the communists.

French politics are even less scrupulous than those of the United States and Mitterand was a fox of the Talleyrand school and sometimes defined the French national interest as serving the interest of other countries. During the war he was an official of the Vichy collaborationist government but was in contact with both the Communist and Gaullist Resistances and the German occupiers.

At one point, as a leading opposition figure, he staged a fake assassination attempt on himself to try and generate popularity. The French are relatively tolerant of these things, and Joe Biden is not remotely as intelligent or as unscrupulous as François Mitterrand. But he has learned a few tricks along the way in his six terms in the Senate and two terms as vice president.

It is conceivable that he is preserving his credentials as a centrist-moderate-left Democrat while claiming to be doing his best for the far left. His extreme reluctance to engage in serious press questioning may be not just concern over his disposition to gaffes and bouts of severe inarticulation, but also a tactic to enable him to preserve a mysterious imprecision about what he really seeks to accomplish: 360 degree plausible deniability.

Secretary of State Blinken and National Security Advisor Sullivan have both stated that they will not agree to resurrecting the Iran nuclear agreement as it was, since that enables Iran, with the complete acquiescence of the other signatories to deploy nuclear warhead missiles in five years.

The Trump administration and both the Netanyahu and Bennett governments of Israel have all stated that they would not tolerate the deployment of nuclear-tipped missiles by the ayatollahs; there is reason to hope that if the Iranians proceed towards that capability on the present timetable, the administration would at least accept, as would most of the Arab powers, an Israeli attack upon the Iranian nuclear missile program.

China-policy has been more ambiguous, but there have been faintly purposeful noises about Taiwan and some discussion with Japan, India, Australia, and others about coordinating a pre-containment strategy, building upon what the Trump administration had put in place.

It is perhaps an advantage that after China’s spectacular victory in imposing year-long shutdowns in the entire Western world over the virus that China permitted to be exported, the People’s Republic is more pompous and supercilious to neighboring countries than ever, and also more brazen in its violation of the Hong Kong Treaty (including condoning an assault on the office of this newspaper), and in its suppression of freedom, religious practice, and targeted minorities.

Biden’s elaborate pretense to being incomparably more reasonable than his predecessor may bear some fruit if the European “allies” are frightened out of their amiable and delusional torpor to the point of resuming some recognizable concept of collective security opposite this rising challenge. There was no sign of this in Cornwall last week.

Biden squeezed all the juice out of the “I’m not Trump” lemon he could with the Europeans and even for those who welcome a more serene ambience around the presidency and especially in foreign affairs, it was very tiresome witnessing the first couples of the United States and the UK bumping elbows when all have been heavily vaccinated and Prime Minister Boris Johnson has recovered from the virus as well.

The most hopeful element of Biden’s foreign policy is that he seems to be leading his party away from Russia-baiting. This may imply recognition that as Russia has a smaller GDP than Canada and is no threat to the United States but that it could be an immense nuisance if driven into the arms of China, and allowed China to exploit the untapped natural resources of Siberia and the vastness of Asiatic Russia.

The president should be commended if he is moving to head off that nightmare. Russia’s importance is on the balance between China and the West. We want that immense country and the civilization of Tolstoy, Dostoyevsky, and Tchaikovsky in the West.

I’m not too excited about permitting the Nordstrom pipeline to proceed. It was 95 percent completed and was really a response to the German rather than the Russian government. The real worry is the degeneration of Germany, Europe’s strongest power since it was unified by Bismarck 150 years ago, into a semi-disarmed energy satellite of Russia. It is a self-immobilized ally now, awaiting new leadership.

The administration’s response was acceptable in the recent exchanges between Israel and Hamas and Republican claims that Biden had thrown Israel to the wolves are very exaggerated.

The worst foreign policy-related failure of this administration is the horrible mess on the southern border. Homeland Security Secretary Mayorkas solemnly announces “The border is closed” as television viewers are treated to the sight of masses of illegal immigrants pouring into the country overland and wading through the shallowest stretches of the Rio Grande.

Presumably the administration will act to end this tragic charade, amplified by the fiasco of the vice president’s visit to Central America highlighting her and Biden’s aversion to going to the border. The best that can be said, and without much conviction, is that this absurdly credulous definition of asylum will soon give way to the resumption of Trump’s very successful policies called by other names with the connivance of the docile Democratic political media.

The credibility of this regime is not helped by gushing in the media. The worst last week was courtier-chronicler Jon Meacham po-facedly asserting that Biden’s prose at Cornwall “was poetry.” Serious historians do not utter such rubbish.

A mighty act of faith and hope is required to subscribe to much of this, but after five harrowing months of Biden and Harris it still isn’t impossible. As after all these murders that are thrown up by the huge increases in violent crime, we are in constant need of hope and prayer.