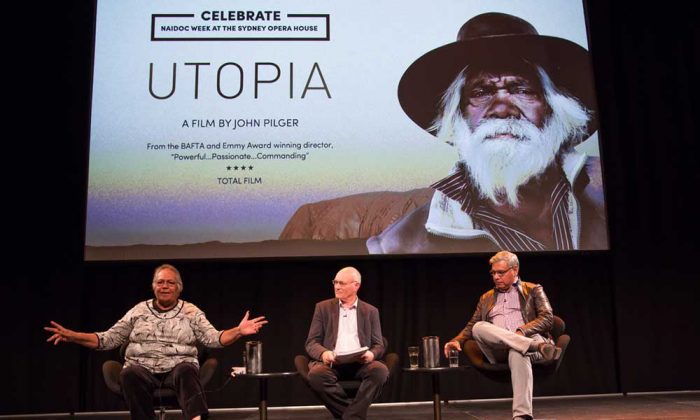 A Hidden Third-World in Australia

Since visiting remote indigenous Australia for the 1985 documentary The Secret Country, journalist John Pilger was shocked to find that in 2013 little had changed – the conditions were just as grim.

In his most recent film, Pilger documents the third-world conditions in a region north of Alice Springs in the Northern Territory. It is one of the poorest areas in Australia according to a federal government report and is ironically called Utopia.

The disparity between rich and poor and the often-malfunctioning relationship between Indigenous Australians and White Australians seem to be hidden under the global postcard-perfect image of Australia far too often.

In a panel discussion after the screening of the film at the Sydney Opera House on July 5, Warren Mundine, the Prime Minister’s Chief Advisor on Indigenous affairs commented that 30% of government money allocated to Indigenous Australians is “swallowed up” by bureaucracy before it even gets to their homeland.

The federal budget revealed this May that more than $500 million will be cut from Indigenous programs administered by the government over the next five years.

Rosalie Kunoth-Monks an aboriginal actor and Elder spoke passionately about the issue and said: “It is not that the money is the solution.”

“Suppression has never worked in the history of humankind” she said, “It is time to have a dialogue.”

Utopia was screened at the Sydney Opera House at the beginning of NAIDOC  (National Aborigines and Islanders Day Observance Committee) Week that is celebrated Australia-wide in the first full week of July each year.