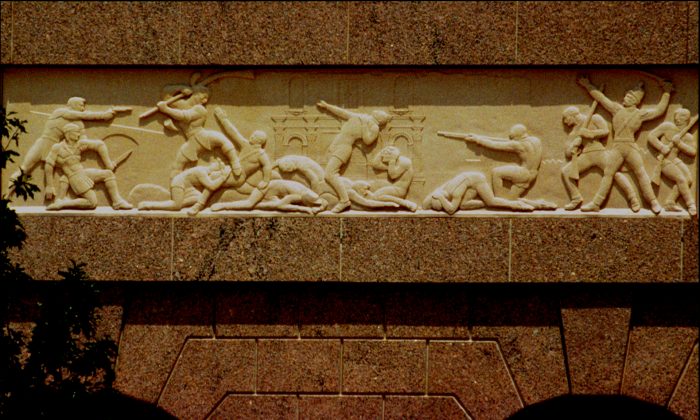 ‘A Healthy Bath of Exquisite Beauty’: An Interview With Michael Curtis

A classical architect, sculptor, painter, and poet, Michael Curtis is, in no uncertain terms, a Renaissance man. He has taught and lectured at universities, colleges, and museums, including the Institute of Classical Architecture & Art and the National Gallery of Art.

His paintings and statues are housed in over 400 private and public collections, including the Library of Congress and the Supreme Court. Perhaps his most interesting recent endeavor has been as lead designer for the 58-square-mile mega resort AEGEA, to be built in North Palm Beach, Florida.

What does this fount of classical aesthetic wisdom have to say for himself? I just had to find out.

Evan Mantyk: In addition to being a classical poet, you have a deep background in classical arts, such as architecture, sculpture, and engraving. In a world seemingly awash in modern arts, what is the value of traditional poetry and art?

Michael Curtis: The value of traditional art and poetry to any person depends upon the quality of the art and of the person. I rather agree with Pico [della Mirandola, Renaissance philosopher] that we might move up or down the ladder of being, we might ascend beyond angels or descend beneath worms.

But, yes, if we contemplate the best of what has been made, said, and done (the classical), we are more likely to ascend. If we consider modernist art (the passions of the moment), then … In truth, when considering modernist art, most people descend to boredom or to pretense, as each is disposed. Your question included the phrase, “awash in modern art,” which intends, I suppose, “soiled in modern art,” to which I answer: In fact the modern stinks, and we need the benefit of a cleansing bath, a fresh, healthy bath, of exquisite beauty and abiding truth.

Mr. Mantyk: From which classical poets and artists do you draw the greatest inspiration?

Mr. Curtis: Honestly, I am inspired by nature, moved by events, tutored by masters. The classical poets and artists under whom I study include the poets Simonides, Martial [Marcus Valerius Martialis], Shakespeare, Alexander Pope, William Butler Yeats; sculptors Polykleitos, Paul Manship, Carl Milles. Then too, I have learned from the visual artists Leonardo, Michelangelo, Raphael, St. Gaudens, J. E. Fraser, Girard, and Holland.

My personal style is most indebted to Greek lyric and to red-figure [painting], with particular obligation to the Attic, especially the archaic (here too of architecture). I might have said Emily Dickinson, yet her influence inclined to quaintness; I might have said Percy Bysshe Shelley, yet his influence seduced into breathlessness; Walt Whitman, I rejected.

Of contemporary classical poets, I am most challenged by Joseph Salemi, Leo Yakevich, and Joseph (Jody) Bottum; in this too I am Greek, unable to deny agon (competition).

Mr. Mantyk: You are involved in the planning of the classical-themed mega resort AEGEA. What is it? How is it progressing?

Curtis: AEGEA is a palindrome. It is an acronym, for Attractions and Entertainment in a Global Exhibition of Architecture. It is a neologism for the namesake of the Aegean Sea, the Athenian king Aegeus, father to the hero Theseus. And it is the extension of the proto-Ionian culture that formed Western civilization.

AEGEA will contain, within its core 10 miles, 11 village colonies representing civilization, including Grecia, Italia, Dacia, Germania, Arabia, and more. You might imagine each village as part of a world exhibition, like the World’s Columbian or the Panama-Pacific expositions, yet permanent.  These exhibitions will extend each civil and each aesthetic tradition—you might consider AEGEA to be a community of nations growing into the future without the corruption of degrading modernist influence.

Contiguous with AEGEA’s core 10 miles are the 48-square-miles of a new city located at the midpoint between Palm Beach and Orlando. This larger city, too, will be classical, an integrated work of art containing buildings, statues, picture, song, and verse.

How is it progressing? Millions have been expended in planning; in this, I have been fortunate to work with gifted civic artists. Now the fellows are raising billions and they suppose we shall soon begin. In the meantime, I compose verse plays and develop statuary, including this afternoon a model for a piece called “Striding Liberty,” which I imagine to be 24 feet tall.

Mr. Mantyk: Does it make sense for people interested in classical poetry and arts to be engaged online using modern technology?

Mr. Curtis: Being Greek-like, I am less than fond of mere techne (technology), yet, grudgingly, I admit computers and internet have assisted we classicists in finding one another.

Interview has been edited for brevity and clarity

Young knucklehead: Today you’ll bruise your thumb
To harden you to pains to come;
The sun will burn; the heat will cause you sweat;
Dust will choke before the sun is set.
When you are good for more than sweeping floors,
In five or six years—maybe more—
Then you may carve in stone your first design,
Perhaps broad lace-work, or a vine.
Should then the master see that you are good
At carving in both stone and wood,
He may allow a job and you your tools:
So, stand sharp, don’t seem the fool.
The master comes. Look how he moves with ease;
A measured grace and force in harmony.

The name of Spring is ever fresh and fair;
Her sound is ever gentle, ever true;
The Spring is like the songbird of the air
Who sweetly choruses the good, the new.

And we, my dear, have often seen the Spring
Arrive with promise, blossom, fade and go
To who knows where. The bird turns on her wing
As if to wave to Spring to end the show.

And we have lived to pass another year,
To watch in course the Spring and sun decline,
Which makes the coming year to me, my dear,
The more loved, the more precious Valentine.

The snows melt, the flowers open, the songs
Again begin for us a little-long.

Seek in your art the grandeur of the Greek,
The noble calm, the sweet simplicity.
Question Nature, conceive Her, look beyond
Into Platonic Forms, hold them, respond
With measured lines determined logically,
Like angels sing, purely and exactly.
Balance the essences, leave out the rest,
Choose for your model summits of the best.
Restrain your brushes and confine your hues
To form an object of abiding truth—
That skill of art which is most rarely won
Is found in things lavishly underdone.
Think to know and know then what to feel.
The greatest art is art which is ideal.