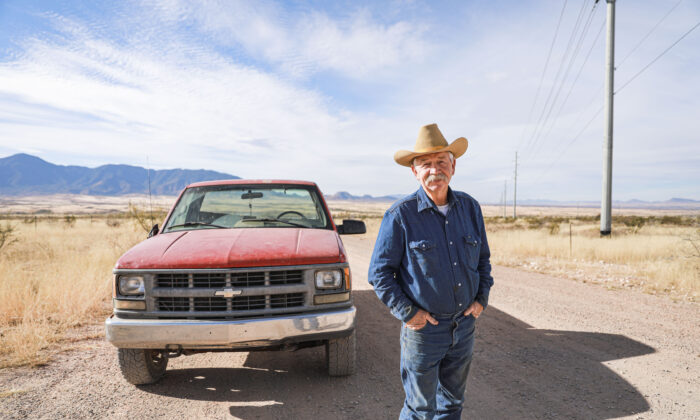 ‘A Gun at Every Door’: Border Rancher Sees 2,400 Percent Increase in Illegal Aliens on Property

Much to John Ladd’s frustration, the two industries intersect on his ranch, which is sandwiched between the U.S.–Mexico border and Highway 92, a convenient smuggling pick-up road.

Ladd’s ranch shares 10 1/2 miles of border with Mexico and in mid-2019 had an average of 12 illegal aliens traversing it daily, with Border Patrol catching about half.

Now, he says, it’s about 300 a day and Border Patrol catches about 30 percent on a good day. The numbers started escalating around the same time the 2020 presidential election swung Joe Biden’s way.

“I’m not going to say there’s no hope, but nothing’s going to change as long as Biden’s there and his administration,” Ladd told The Epoch Times on Dec. 8, 2021.

“And so what are we going to do, just let them come through?”

The illegal immigrants traversing Ladd’s ranch aren’t seeking asylum—they’re mostly young, single men dressed head-to-toe in camouflage clothing and doing everything they can to avoid law enforcement and get to Phoenix.

“These people can’t turn themselves in, they’ll get deported. These are the bad people. We’re dealing with the worst of the worst,” Cochise County Sheriff Mark Dannels said.

Dannels’s border team has placed hundreds of trail cameras throughout the county since 2017 to detect illegal aliens, traffickers, and smugglers.

The money for the cameras was raised from private donations—Dannels refuses to accept government money that has strings attached.

“There were 37 experienced smugglers [on his property] that are now sitting in prison,” Dannels said in 2019.

The drugs are still coming across, but the cartels are making an endless amount of cash with human smuggling, so they’ve added a lucrative new revenue stream.

Currently, Dannels’s cameras are detecting about 6,000 illegal aliens per month in the county, while Border Patrol is detecting an additional 10,000.

Detective Jake Kartchner, who is part of the sheriff’s border team run by Sgt. Tim Williams, said each illegal alien must pay the Sinaloa cartel between $7,000 and $9,000 on average to get across the border.

Getting across the border and to a road is the first step. Next, a smuggler receives a GPS location of a group, loads them up, and heads to Phoenix. The drivers are mostly U.S. citizens who are recruited via social media and paid about $1,000 per alien transported to Phoenix, according to the sheriff’s office.

“It’s like the cartel Uber. They just stage in public places all along the roadways waiting to get called up to go pick them up,” Dannels said. He said 900 to 1,000 smuggling vehicles are tracked in the county each month.

Ladd said he has watched vehicles load up on Highway 92 after crossing his property.

“Those cars aren’t even stopping—they’re slowing down and they’re running along and open the door and jump in and off they go,” he said. “It’s very well coordinated.”

No state law against smuggling illegal aliens exists in Arizona, and the federal government isn’t prosecuting juvenile drivers or those transporting five or fewer aliens, according to Cochise County Attorney Brian McIntyre.

Cochise County shares 83 miles of international border with Mexico and sits in the southeast corner of Arizona, abutting New Mexico. The landscape consists of remote desert and mountain passes.

Border Patrol apprehensions in the Tucson sector, which encompasses Cochise County, almost tripled in 2021 compared to 2020.

In fiscal year 2021, border agents apprehended more than 190,000 illegal aliens in the sector, compared to 66,000 the year before. Thousands more evaded capture—including many on Ladd’s ranch.

“This new invasion, they don’t want to get caught. This isn’t like Texas, where they’re coming, ‘Here I am.’ They’re running,” he said.

Ladd said his family has to stay more vigilant than before and ensure everything is locked up.

“We’ve got a gun at every door in the house. We had to go through all that again with the family—you better understand if you’re going to shoot somebody, the consequences, and you better make sure you’re really in danger,” he said.

Ladd said two of the ranches on the Mexican side directly across from him are owned by the Sinaloa cartel, and the owners of the other two have been told to stay off their property after dark.

Although he’s not looking to sell, Ladd said the border has halved the value of his ranch since it was placed into a family trust in 1983. He had to get the ranch reappraised eight years ago when his mother died and the value had plummeted by half, he said, adding that improvements worth $2 million to $3 million had been undertaken during that time.

“In the appraisal, they said, ‘This ranch’s southern fence is the border,'” Ladd said. “That was the first sentence in the appraisal.”

His ranching costs are also higher as he deals with cut fences, gates left open, and more scattered herds.

“The amount of labor involved to get cattle now is three or four times what somebody 50 miles north has to put up with,” he said.

McIntyre said residents want to feel safe on their property.

“You’re not going to feel safe if you’ve got 100 people across your property line at night,” he said.

“The commercials are pretty much telling them—from what we’ve gathered—’It doesn’t matter your immigration status, we’ll hire you,'” he said.

The commercials are encouraging illegal immigrants to get to New Jersey, Oregon, or Chicago, and promising that work will be provided, Kartchner said.

“They’ll freely tell you why they’re coming across,” he said of the illegal aliens they catch. He said up to 60 percent of them are currently saying they came because of the advertising.

Ladd said he believes most illegal immigrants coming across his land end up being indentured servants to the cartel to pay off their smuggling debt.

He’s bracing for another frustrating year in 2022 as the flow continues unimpeded.

“The plan is to let everybody come,” he said, referring to the Biden administration. “And they’re all going to vote Democratic. I think that’s the biggest thing that people have finally understood—that’s what he’s doing.”