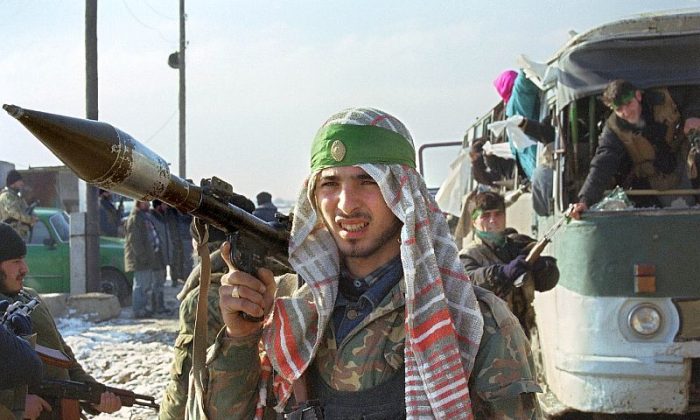 Two women raise white flags through the broken window of the bus where a group of Chechen fighters keep them as hostages on Jan. 10, 1996, in the region of Pervomaysk near the border with Chechnya. (Oleg Nikishin/AFP/Getty Images)
International

A Guide to Understanding Terrorism

The word “terrorism” paints a broad stroke across diverse circumstances, disparate ideologies, and groups with varying degrees of organization.

It is difficult to define, admits Benjamin P. Nickels, assistant professor of transnational threats and counterterrorism at the Africa Center for Strategic Studies.

He is, however, able to outline four components commonly agreed upon to characterize terrorism:

1. The perpetrator is a nonstate actor.
2. The targets are civilians.
3. Violence is used, usually in a symbolic manner and to create fear.
4. The goal is political.

Terrorism pervades the daily news—Tunisian militants are spreading beyond the borders of their homeland, fighting alongside militant groups in Iraq, Syria, Afghanistan, and Mali, and creating fear of an endless Arab Spring.

Al-Qaeda in the Islamic Maghreb (AQIM) issued a statement on March 17 calling on North Africans to join the jihad.

Fresh bursts of protest in Morocco seek to topple the Islamist-led government; the country’s unrest and history of terrorist activity could provide an opportunity for terrorist groups.

Experts explain the complexities of terrorist tactics and motivations; the difference between Islamist and jihadist groups; and misconceptions about terrorist groups.

Overlapping in territory and ideology, it is often difficult to determine which group is responsible for any given attack.

“Determining who is behind an attack is a bit like diagnosing a disease,” writes Nickels in an email to The Epoch Times. “It requires weighing several types of evidence, rather like symptoms—that is, like traces that recommend, rather than demonstrate, a source,” he wrote.

Experts look for the signatures of various groups—tactics, techniques, procedures, and choice of target.

Only terrorist groups with a very tight organization, with clear command, control, and structure, tend to show uniformity in tactics, says John Campbell, a senior fellow at the Council on Foreign Relations in New York and a former American ambassador to Nigeria.

This level of organization is rare, says Campbell.

Some attacks are conducted by a handful of people that disperse after the action and can therefore only loosely be called a group.

Nigerian terrorist group Boko Haram is not a unified organization, but rather a bundle of factions. The factions share a certain Islamist rhetoric, but they often differ in tactics.

Campbell became particularly acquainted with Boko Haram during his time as ambassador in Nigeria. He explains that for a long time the followers of Boko Haram leader Abubakar Shekau said they would not kidnap people. A Boko Haram splinter faction, Ansaru, does, however, kidnap foreigners.

Shekau and his followers, after long denouncing the tactic, appear to have had a change of heart. In a video released about two weeks ago, ostensibly by Shekau, his followers claim to be holding seven French hostages, all from the same family.

“So one time, one faction denies kidnapping, [and] another faction practices it. Now, the other faction that denounced kidnapping seems to have adopted it as a tactic,” Campbell said in a telephone interview. “In other words, it is often unwise to look for much consistency when we talk about tactics.”

Vanda Felbab-Brown, senior fellow with the Center for 21st Century Security and Intelligence in the Foreign Policy program at the Brookings Institution, says one reason it is difficult to identify the perpetrator, is groups often change their modus operandi.

“Experts can speculate and say, ‘Okay, the attack occurred in northern Nigeria, it targeted Christian churches, so there is a very high likelihood that it was perpetrated by Boko Haram,’” Felbab-Brown explained in a telephone interview. “But things evolve. Groups splinter, generate copycats. So only a very careful police and intelligence group investigation can determine with any sort of accuracy in the end.”

For example, suicide attacks were extremely rare 20 years ago, and limited essentially to the Tamil Tigers in Sri Lanka. Now, suicide attacks are routinely adopted by many, particularly Salafi groups, explains Felbab-Brown. Salafi is a movement among Sunni Muslims that adheres to a literalist theology, and looks to pious ancestors for guidance on how to live.

Because of the success of suicide attacks in Iraq, they have proliferated.

“Successful approaches tend to produce copycats,” Felbab-Brown says. “So if one group starts using suicide bombings and does it successfully, then very many groups adopt suicide bombings.”

In the 1980s there was a trend of hijacking planes and ships. Several terrorist groups did it successfully, so other groups adopted it. Nowadays, terrorists don’t try to hijack planes.

As terrorism tactics change, so does the response.

Felbab-Brown believes that governments will move away from war and foreign occupation as a means to counter terrorism. This was the approach in Afghanistan, Iraq, and even recently in Mali, but many countries have exhausted resources on these wars. They have learned the costs and limitations of war in battling terrorism, Felbab-Brown says.

“The response will be a more distant effort combined with a drone campaign,” she predicts.

American Predator drones currently fly over Niger and Mali gathering intelligence on terrorist groups. The unmanned drones are currently unarmed, but U.S. officials have said they would consider arming them with missiles in the future, according to British publication, The Telegraph.

Felbab-Brown thinks the use of drones will run its course.

She predicts that governments will tackle terrorism with a mix of regular police actions by combat terrorism units and clandestine killings by intelligence agencies.

Many terrorist groups are motivated by some form of jihadist or Salafist ideology. Even groups fighting for national liberation or for a particular political order also embrace Islamist religious narrative as a justification (for example, groups in Chechnya, Russia, and arguably Hezbollah).

Islamism can be defined not only as a religious doctrine, but also as a political system, according to C. Holland Taylor, chairman of LibForAll Foundation at the International Institute of Qur’anic Studies.

It stipulates that modern Muslims must return to the roots of their religion and unite politically. It seeks to employ a repressive state apparatus to impose a particular understanding of Islam upon others by force, Taylor says.

“Jihadists are ‘impatient’ Islamists who seek to achieve their objectives by waging immediate armed struggle,” Taylor writes in an email to The Epoch Times.

Other Islamists are gradualists. They seek to acquire political power through less immediately violent means, which may include subversion, or democracy.

All jihadists are Islamists, but not all Islamists are jihadists.

“One myth that is floating out there is that most terrorist groups resort to very dramatic attacks and want to kill as many as possible, so they are easily tempted to resort to using, for example, weapons of mass destruction,” Felbab-Brown says.

Only three terrorist groups have been identified as having tried to get weapons of mass destruction: al-Qaeda, Aum Shinrikyo in Japan, and Lashkar-e-Taiba in South Asia.

Another popular myth, says Felbab-Brown, is that all terrorist groups cooperate with each other. Many rivalries exist between groups; the groups themselves are not monolithic, and are often divided by infighting.

She says it is also not true that terrorist groups can only be neutralized by killing the members off.

“Look at IRA [Irish Republican Army]: it got out of business as a result of peaceful negotiations,” Felbab-Brown says.

Amel Boubekeur, visiting fellow at the Brookings Institution Doha, Qatar, dispels another terrorism myth—the myth that all fighters are ideologically convinced by the jihad. Many are involved in drug or human trafficking and join the groups for business purposes. Some youth are incited to anger.

“I met young people who are totally disconnected from any kind of jihadi movement, and who told me they decided to enter jihad after having seen images of Western armies torturing the Arabian population,” Boubekeur recalls.

Boubekeur, who is an expert on the AQIM group, said that AQIM will continue to draw in youth as long as it presents itself as a force combating American invasion. It can thus appeal to public dissatisfaction and become a means to vent that dissatisfaction.

“AQIM will have a bright future as long as the political vacuum is a reality in the region, especially southern Algeria and northern Mali,” Boubekeur says.

But according to Taylor, terrorist organizations are still not the biggest threat.

The real danger comes, Taylor says, from the countries with Islamist governments—like the Shi’ite government of Iran, or the Sunni governments of Saudi Arabia, Qatar, and Sudan.

“Islamist governments pose a greater threat than current jihadist groups,” Taylor says, “because they not only fund these jihadist groups, but also control the repressive apparatus of a state and its financial resources, which they use to propagate Islamist ideology worldwide.”