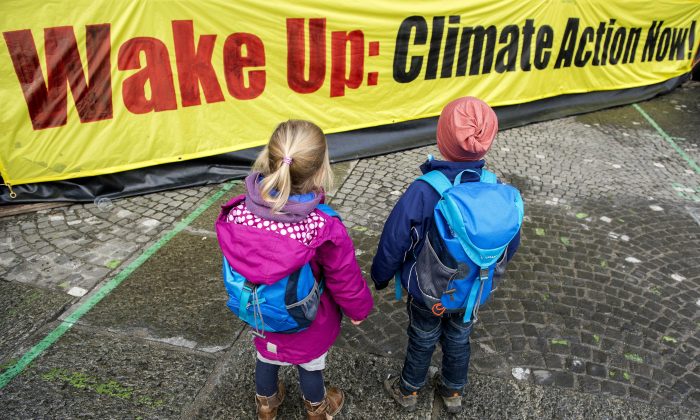 Two Children in front of a banner during a protest rally of the 'Climate Alliance Switzerland' in Zurich, Switzerland, on Nov. 28, 2015, ahead of the COP21 climate summit in Paris. (Anthony Anex/Keystone via AP)
International

A Glossary for UN Climate Talks

PARIS—It sounds like English. Yet to the untrained ear the language used in the U.N. climate talks is about as comprehensible as Klingon.

Sometimes you wonder whether the negotiators are trying on purpose to make a simple idea sound more complex than it is. But it’s also a matter of international law.

Many delegations have teams of lawyers that analyze every syllable for potential hidden meanings. Before everyone’s comfortable with the wording of a concept or idea, it’s often turned into an acronym.

Here’s a guide to help you decipher some of the most commonly used terms in the Paris talks:

COP 21: No, the three letters have nothing to do with the Danish capital, Copenhagen, where one of the most famous, or perhaps infamous, climate conferences was held in 2009. COP stands for Conference of the Parties, referring to the countries that have signed up to the 1992 United Nations Framework Convention on Climate Change. The COP in Paris is the 21st such conference.

UNFCCC: See previous entry. To sound like an insider, pronounce this U-N-F-triple-C. Or just say “the framework convention.”

INDC: This acronym first appeared in U.N. climate talks in Warsaw in 2013. It stands for Intended Nationally Determined Contribution and refers to the climate pledges that countries have made ahead of the Paris conference. Every word has legal implications indicating that the INDC isn’t a binding promise. The pledges are “intended,” not set in stone, and they are “nationally determined,” not imposed from the outside. The “C” at one point was for “Commitment,” but that sounded too much like promise for some countries.

ADP: This is perhaps the most useful abbreviation in the talks, considering the time it takes to read out the full name of The Ad Hoc Working Group on the Durban Platform for Enhanced Action. The ADP is a subsidiary body created in Durban, South Africa, in 2011 for negotiations on the universal climate agreement that’s supposed to be adopted in Paris. The Paris conference will deal with other things as well, like pre-2020 ambition.

PRE-2020 AMBITION: This refers to actions taken by countries to limit greenhouse gas emissions before the Paris agreement would take effect in 2020. This part of the discussions is meant to remind big polluters that the Paris deal doesn’t mean they’re off the hook for another five years.

CBDR: This acronym lies at the core of the most difficult issue left to resolve in Paris. The principle of “Common But Differentiated Responsibilities” is enshrined in the 1992 framework convention. It recognizes that countries in different stages of development have different obligations in dealing with climate change. Until recently it’s been implemented as a strict division between rich and poor countries, where only the former are obliged to reduce their emissions. The U.S. and other developed countries want to scrap that firewall in the new deal, while many developing countries including India insist that it live on in some form.

REDD-PLUS: Not the prettiest of acronyms, it refers to efforts to protect forests, which when destroyed release carbon into the air, contributing to climate change. REDD stands for Reducing Emissions from Deforestation and Forest Degradation. The plus sign was added in 2010 to indicate that three more elements had been inserted into the discussions: conservation of forest carbon stocks, sustainable management of forests and enhancement of forest carbon stocks. Just imagine what that the REDD acronym would have looked like if someone hadn’t thought of the plus.