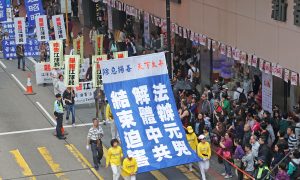 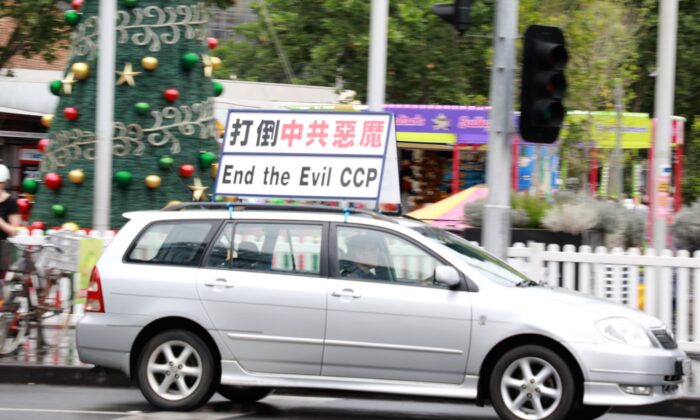 A car with the message "End the Evil CCP" in Chinese and English driving through Melbourne during an End CCP car rally on Nov. 22, 2020. (Grace Yu/Epoch Times)
Australia

On Sunday, Nov. 22, approximately 50 cars with mounted banners toured the streets of Melbourne, Australia to call on locals to “reject” the Chinese Communist Party (CCP).

Organised by the local branch of the Global Service Centre for Quitting the Chinese Communist Party, or Tuidang Centre, the car rally saw mounted banners in both Chinese and English that read “Communism puts everyone at risk,” “End the Evil CCP,” “CCP lies people die,” and “CCP is the real source of the [corona]virus.”

The Tuidang Center is a non-profit organisation set up in June 2005 in the United States. Its mission is to help Chinese to “tuidang” or “quit” the Communist Party. “Tuidang” refers to a statement to withdraw from the CCP and its affiliated organisations.

Lucy Wang, spokesperson for Tuidang Centre in Melbourne, said the event was to raise awareness about the evil nature of communism, CCP infiltration in Australia, and the Chinese regime’s coverup of the COVID-19 outbreak.

Wang added that it’s not just Chinese people who need to understand the “evil nature of communism” but “the whole world.”

According to the endccp.com website, hundreds of millions of people have suffered from the CCP’s “endless deceptions and brutality.”

The pandemic, for instance, “could have been prevented if the Chinese Communist Party (CCP) did not lie,” the website states.

Internal documents obtained by The Epoch Times showed how Chinese officials worked to cover-up the true nature of the CCP virus for months before it spread around the world, becoming a pandemic.

Additionally, three researchers, including two from the School of Medicine at Washington University in St. Louis, declared that if the CCP had enforced measures to stop the spread of the virus by Jan. 2, the number of infections would have reduced from 239,875 to 10,989 cases.

“Without the three-week delay, the largest public health crisis of this century could have been avoided or controlled to a much greater degree,” the researchers stated.

The car rally was also heavily supported by volunteers who practise the spiritual discipline Falun Dafa or Falun Gong. Messages from these volunteers included “Falun Dafa is good” and “The world needs Truth, Compassion, Tolerance”—which are the core tenets of Falun Dafa.

While observing the Victorian Chief Health Officer’s guidelines, the car rally began its four-hour journey from the eastern suburbs of Melbourne through to the CBD, passing through busy shopping districts and suburbs in between.

Members of the public who took note of the convoy watched on intently and gave various gestures of support.

Peter Marsh, a retired doctor who signed the end CCP petition in the city, said he supported the Tuidang movement and understood how Falun Gong practitioners and other religious groups are victimised in China.

Marsh added that CCP infiltration was of particular concern given that recent trade disruptions to Australian industries occurred after Prime Minister Scott Morrison called for an independent investigation into the origins of the coronavirus.

Another passerby congratulated the participants of the car rally and hoped more people “[could] understand the truth.”

Other Australian cities, including cities across the world, have held similar rallies to condemn the CCP for its crimes against humanity.

As of Nov. 25, nearly 370 million Chinese people have quit the CCP and its affiliated organisations, and over 250,000 people have signed the petition to end the CCP.