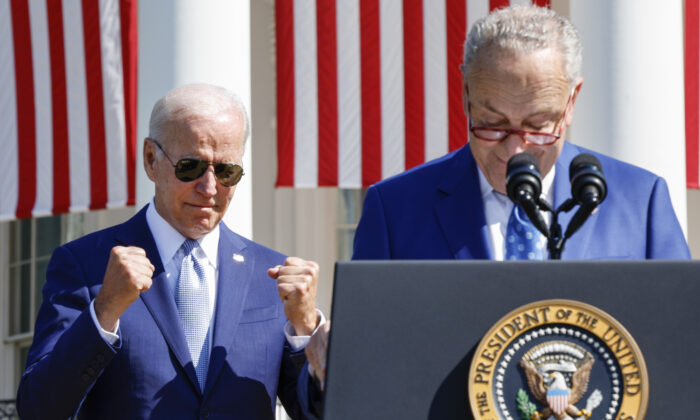 President Joe Biden (L) reacts as Senate Majority Leader Chuck Schumer (D-N.Y.) speaks before Biden signs the CHIPS and Science Act of 2022 during a ceremony on the South Lawn of the White House in Washington on Aug. 9, 2022. (Chip Somodevilla/Getty Images)
Viewpoints

A Giant Stride Toward Socialism

Step by step, for nearly 70 years, liberals have been marching the United States toward government-controlled health care, and the Schumer-Manchin bill is another giant stride.

COVID provided the opening for Congress to enhance and expand Obamacare subsidies for two years, and the bill before the House would extend them for three more years. So much for a temporary program.

The added subsidies push up prices and premiums. And they are a regressive use of taxpayer dollars since much of the benefit accrues to higher-income people.

The Joint Committee on Taxation estimates that, among subsidized Obamacare marketplace enrollees, taxpayers pay 82 percent of premiums. That generates substantial reliance on government for health insurance.

With taxpayers footing the bill, there are few incentives for insurance companies to moderate costs. Premiums for insurance in the individual market increased by 143 percent over six years to 2019, and deductibles also have skyrocketed. The average annual premium plus deductible for a family of four with an ACA plan was about $25,000 in 2021. And that is for coverage with extremely narrow physician networks and often limited access to the best hospitals.

Continuing the expanded and enhanced ACA subsidies would be a major entitlement expansion, and the bill will be voted on even before the CBO has a chance to estimate the full cost.

Here’s a question: Will the CBO be calculating how much will be raised when 87,000 IRS agents start going after people with Obamacare insurance who may have miscalculated their income and therefore received too much in subsidies?

Galen Senior Fellow Doug Badger explains that many people will lose their employer coverage if this bill passes. Smaller businesses that aren’t subject to the Affordable Care Act’s mandate to provide insurance will have strong incentives to discontinue offering coverage to their employees. That means millions more people will have policies where politicians and government bureaucrats, not doctors and patients, make medical decisions.

Most of those who will benefit from the added subsidies are in the upper two income quintiles, many of whom drop their private coverage to take advantage of the taxpayer subsidies. For example, a family of four with a 60-year-old head of household earning $265,000 could end up eligible for more than $7,800 or more a year in taxpayer subsidies, according to an analysis by Brian Blase, president of the Paragon Health Institute.

Further, allowing the extra subsidies to expire would not change the number of people who have health insurance. The Congressional Budget Office estimates that next year 17 million people—the same number as this year—will have individual coverage, even without the extension.

“The goal of the ‘Inflation Reduction Act’ is as straightforward as it is cynical: Transfer billions from Medicare Part D to bankroll green energy projects and subsidize premiums for wealthy Obamacare enrollees,” Joel White of the Council for Affordable Health Coverage writes. “Worse, they are inserting government bureaucrats and politicians into every medicine cabinet in America.”

We have written in this space about the serious implications for pharmaceutical innovation if the bill’s price controls become law.

You do have to wonder if this strangulation of the private health sector isn’t part of a larger goal. Joel suggests it is: “Ultimately, this legislation sets the stage for a new federal government takeover of health care, starting with prescription drug benefits. Hospitals and doctors will be next on the price control list as Congress works to enact government-run health care one step at a time.”

The ACA has driven up health costs, reduced choices, and made it harder for sick people to get care—all while giving a blank check from taxpayers to health insurers, hospitals, and other big health care businesses.

This bill will mean many more decisions over your health care will influenced by political power—how much money companies and constituencies can spend to lobby for decisions in their favor—than by what is best for patients.

Health care is too local and personal for a Washington-driven, one-size-fits-all approach to work. We are anxious to shift our focus to proposals that will unleash the innovation and energy that are pent up in our health sector. Our goal must be to return power to doctors and patients. That is our task next year and for many years to come.