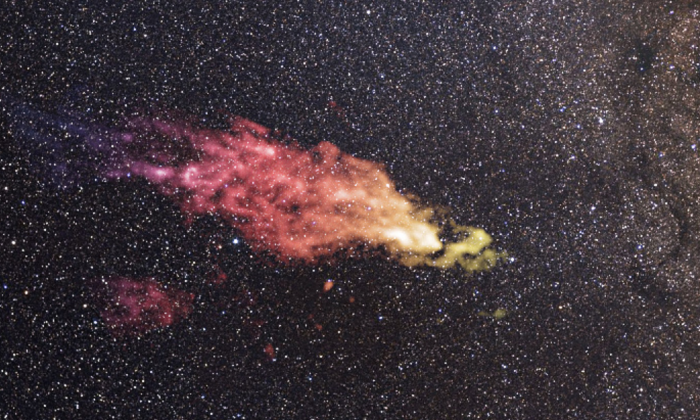 This composite image shows the location of the Smith Cloud on the sky. (Saxton/Lockman/NRAO/AUI/NSF/Mellinger)
Science

The Smith Cloud, a giant gas cloud discovered in the 1960s, is hurtling at the Milky Way at 700,000 miles per hour. Astronomers now believe it contains enough elements similar to our Sun to generate over 2 million new stars when it impacts the Milky Way disk.

But not to worry—the impact is expected to be 30 million years from now.

The Smith Cloud, which contains the raw material for stars, is so massive that if it were visible, it would appear to be 30 times larger by diameter than the Moon, even though it’s thousands of light years away.

Using new data from the Hubble’s Cosmic Origins Spectrograph, a team of astronomers were able to find out more about the chemical composition of the Smith Cloud, and use that to derive its likely origins.

The astronomers found that the Smith Cloud is rich in sulfur, not just helium and hydrogen, which suggests that it was polluted by stars from the Milky Way. That means that the body of gas probably originated from the Milky Way, and not from intergalactic space outside the galaxy.

The Smith Cloud was probably ejected from the outer edge of the Milky Way disk around 70 million years ago, the astronomers say, for reasons unknown.

“We have found several massive gas clouds in the Milky Way halo that may serve as future fuel for star formation in its disk, but, for most of them, their origins remain a mystery,” Notre Dame astrophysicist Nicolas Lehner said in a statement. “The Smith Cloud is certainly one of the best examples that shows that recycled gas is an important mechanism in the evolution of galaxies.”