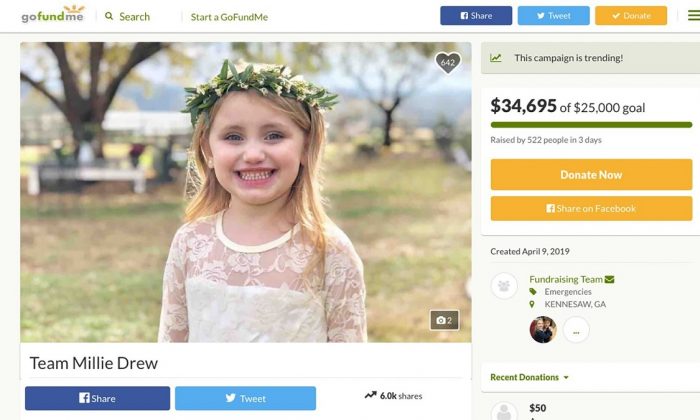 A 6-year-old Georgia girl died this week after her 4-year-old brother accidentally shot her in the head in a car outside their home, on April 13, 2019. (GoFundMe via CNN)
US News

A Georgia Girl Has Died After Her 4-Year-Old Brother Accidentally Shot Her, Authorities Say

A 6-year-old Georgia girl died this week after her 4-year-old brother accidentally shot her in the head in a car outside their home, authorities said.

The girl, identified as Millie Drew Kelly on a GoFundMe site set up for the family, was shot Monday evening at their subdivision about a 40-minute drive northwest of downtown Atlanta, the Paulding County Sheriff’s Office said.

The siblings were in a car in their driveway, preparing to go to the boy’s baseball game, when the vehicle failed to start. The mother exited to try to find out what was wrong with the car, authorities said.

The boy took a gun from the car’s console and accidentally fired it while his mother was outside, striking his sister in the head, the sheriff’s office said.

Emergency responders were called and took her to an Atlanta-area hospital. Two days later, detectives learned the girl had died, the sheriff’s office said.

The boy, who was not named, apparently grabbed it and discharged it by accident, officials told the newspaper.

“Our hearts break for this family and we hope God puts his healing hands around them during this difficult time,” Sheriff Gary Gulledge said in a statement posted to Facebook on April 11.

Henson said no charges are pending in the case.

“We want to remind everyone to keep their firearms unloaded and secured in an area away from children to ensure that this never happens again,” Gulledge noted in a Facebook post.

There appears to be a mix of factors behind the phenomenon.