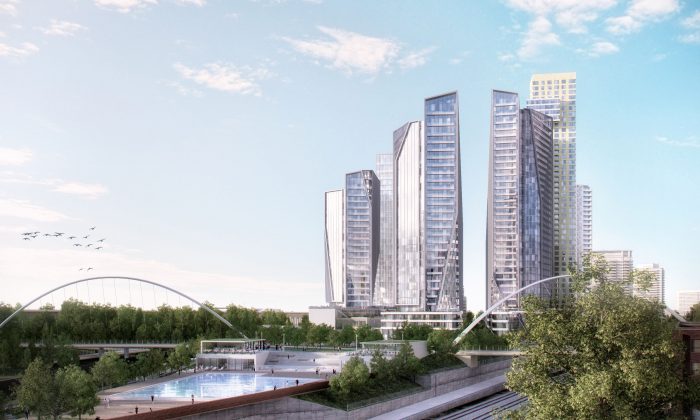 A Full Slate for Cityzen Development Group in 2015

Sam Crignano is feeling optimistic about the year that lies ahead.

The president and CEO of Cityzen Development Group will be overseeing the rollout of a number of new projects in 2015 and the launch of additional phases of ongoing developments. “It’s going to be a busy year for us,” Crignano tells the Epoch Times in an interview at his company’s headquarters on The Esplanade.

Cityzen plans to get rolling on a development at 154 Front St. in the St. Lawrence neighbourhood, a 34-storey, two-building condo designed by Peter Clewes of architectsAlliance that Crignano describes as a “unique piece of architecture.”

Floor plans and interior amenity details are still being finalized for 154 Front, and the firm hopes to launch the development this March. “There’s been a lot of interest in that location, particularly from the owner-occupant, end-user market,” Crignano points out. “There really isn’t much that competes with it in the area.”

This year will also see the launch of the second tower at Garrison Point. Located just east of Liberty Village, this development—which Cityzen is building in partnership with Diamond Corp. and Fernbrook Homes—is located on a triangle-shaped, 7.6-acre site at Strachan Ave. and Ordnance Ave., bound by railway lines on two sides.

The first tower at Garrison Point, with 310 suites, went to market last year and has since sold out; Cityzen plans to bring the second tower, with 400 suites, to market in February. The project, which eventually will comprise five buildings, includes a four-acre public park that will be linked to the areas to the north and south of the new community via a pedestrian footbridge.

“It’s very much about connectivity—connecting our development to what already exists,” Crignano explains.

Citzyen will be moving ahead with the next phase of Pier 27 this year. The architecturally captivating project, at the foot of Yonge St. along the lake shore, is the first major development east of Yonge in what will ultimately be a total revitalization of the eastern waterfront.

“It’s become the catalyst for other development that’s currently being marketed there,” says Crignano, noting that the development will include three more phases, “one of which will hopefully launch this summer.”

And if that weren’t enough, Cityzen is moving forward on plans to develop a pair of other major sites along the Toronto waterfront.

Approval is expected to come this year for the project currently code-named 3C Waterfront. Located on a 13.5-acre site south of Lake Shore Blvd. between Parliament St. and Cherry St., this mammoth mixed-use development will include 2.4 million square feet of residential, commercial, office, and retail space.

Cityzen will also be launching a development on the site where the FedEx facility currently stands on the west side of Sherbourne Street just north of Queens Quay. “We’ll have a big announcement about who’ll design that tower this spring,”
Crignano says.

If 2015 is a big year for Cityzen, 2014 wasn’t too shabby either. The developer saw residents move into the first two phases of Pier 27, as well as the iconic L Tower, designed by Daniel Libeskind, which now stands gracefully over the Sony Centre at Front and Yonge Sts.

“For us, those are two very large milestones,” says Crignano. Construction is also moving along on Backstage, a 36-storey tower that’s rising on a super-narrow triangle-shaped site tucked just behind L-Tower.

It’s not all condos for Cityzen these days, mind you. The builder is also developing a rental apartment project, The Selby, a 49-storey building at Bloor St. East and Sherbourne.

“The economics are such these days that it makes sense to build rentals,” Crignano says. “And a lot of people are choosing to rent.” (That said, Crignano stresses he’s “still a big believer that you want to own a piece of real estate—historically it’s the best hedge against inflation.”)

If you’re looking for a testament to the quality of Cityzen’s work, look no further than the fact that Crignano actually lives in one of his own buildings. “I practice what I preach,” the developer says, noting he moved his family down from Richmond Hill and into one of the firm’s downtown buildings. “I walk to work, and whenever I have to get in my car it’s a bit of a nuisance.”

And while Cityzen will be pursuing plenty of new development this year, one of its iconic older projects, Absolute World in Mississauga—nicknamed “the Marilyn Monroe,” or “Twisted Sisters” owing to the curviness of the towers—continues to attract global attention.

“There’s always somebody writing about it somewhere in the world,” says Crignano.