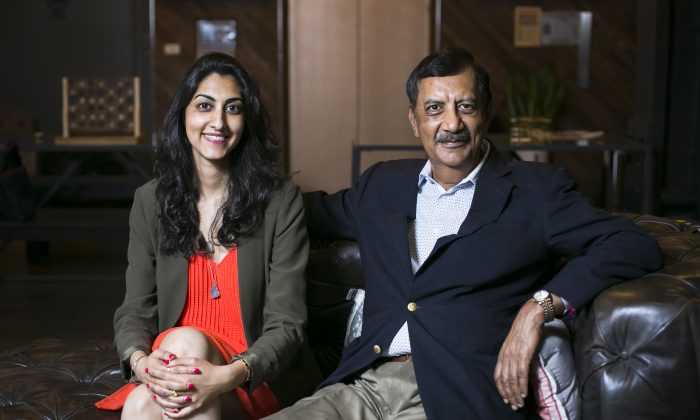 BankMobile is a fintech company with a bank charter and portrays itself as the digital bank of millennials. The company, run by a father-and-daughter team, added 2 million customers in just about 18 months after launch.

Launched in January 2015, BankMobile is the first fintech startup to offer completely fee-free banking services. It provides checking and savings accounts, a line of credit, access to ATMs nationwide, and a higher savings rate than the large banks.

“The banking system today is not serving Americans. Banks are charging $32 billion a year in overdraft fees alone, which is more than what people are spending on buying vegetables,” said co-founder Luvleen Sidhu, also the chief strategy officer of New York-based BankMobile.

There are 68 million Americans who are underbanked or unbanked.
— Jay Sidhu, chairman and CEO, BankMobile

The company’s strategy is to offer an alternative banking service to people who struggle within the current banking system, such as millennials, the underbanked, and middle-income Americans.

“According to the Federal Reserve, there are 68 million Americans who are underbanked or unbanked. That is huge,” said Jay Sidhu, chairman and CEO of BankMobile.

Its technology provides financial freedom to its customers by eliminating branches. The bank can be accessed through a mobile application for smartphones and tablets or via the internet.

The app is designed to make banking effortless. Customers can open an account in a few minutes with a picture of an ID, transfer money using their cellphone number or email address, pay a bill with a photo of an invoice, and make a deposit with a photo of a check.

Co-founder Jay Sidhu is a veteran banker with 40 years of experience and also serves as the chairman and CEO of Customers Bank, headquartered in Pennsylvania with $9 billion in assets. Prior to Customers Bank, he served as the founder, chairman, and CEO of Sovereign Bancorp.

Combining my father’s experience with my millennial entrepreneurial spirit is the right recipe for disruption in financial services.
— Luvleen Sidhu, co-founder and chief strategy officer, BankMobile

Luvleen Sidhu, his daughter, earned a bachelor’s degree from Harvard University and an MBA from the Wharton School of business. She worked as a management consultant prior to joining BankMobile.

“Working with my father is a blessing, a great opportunity. I enjoy working together with him,” Ms. Sidhu said.

“Combining my father’s experience with my millennial entrepreneurial spirit is the right recipe for disruption in financial services.”

The two developed a unique marketing strategy to disrupt traditional consumer banking. They have established partnerships with about 800 colleges and universities throughout the United States.

“We deal with about 5 million students, of which 2 million chose to bank with us,” Mr. Sidhu said. BankMobile targets roughly 40,000 new accounts per month, which is phenomenal compared to a traditional bank branch. A branch can open only two to three accounts per month, according to Mr. Sidhu.

BankMobile is helping schools to provide better and efficient banking services for their students. It is also compliant with the Department of Education rules, he said.

We cracked the code in terms of acquiring customers versus other neo-banks.
— Luvleen Sidhu, co-founder and chief strategy officer, BankMobile

According to Mr. Sidhu, one of the pillars of success in digital banking space is technology, which has to be hard to replicate. BankMobile paid a lot of attention to building the best technology behind its service offering. “Our core competency is our software,” said Mr. Sidhu.

Word-of-mouth is the best marketing technique so far, according to Ms. Sidhu. The company launched a movement on social media called #LiveFreeBankFree and recruited college students as campus ambassadors to spread BankMobile by word-of-mouth.

“When you have a product that really is for the people, they speak about it. People trust their peers,” she said.

Investing in digital ads, especially in social media advertisements, was very effective as well. The company also applies guerilla marketing, by directly speaking to customers, learning what they feel about the product, and amending it based on the feedback received. “This is a great way to build brand equity and brand awareness on the ground,” Ms. Sidhu said.

“We cracked the code in terms of acquiring customers versus other neo-banks,” said Ms. Sidhu. “You can have a very disruptive product, but if you don’t have a customer acquisition and retention strategy it is not going to help much.”

According to her, there are 6,000 fintech companies. BankMobile competes with a few of them in the neo-banking space. However, what differentiates BankMobile from its competitors is the bank charter, as the company is fully owned by Customers Bank.

In July, BankMobile had annualized revenues of $60 million. Almost 90 percent of it is income other banks or service providers pay BankMobile for transactions like debit card purchases. The rest is driven by software and licensing fees. BankMobile employs 250 people in its offices in New York, Connecticut, and Pennsylvania.

Regulation is the biggest challenge that slows down the fintech revolution in the United States according to the Sidhus.

“We believe the United States is behind Europe and even countries like India or China because it is overregulated,” Mr. Sidhu said.

A lot of people are frustrated with their banking experience and in actuality, 40 percent of them want to leave their bank.
— Luvleen Sidhu, co-founder and chief strategy officer, BankMobile

Convincing people to move to digital banking is another big challenge the fintech companies face. Especially in the United States, customers still find traditional banking more convenient and trustworthy according to a survey by consulting firm Capgemini and Efma.

Despite all of the investment into new technology, only about 1 percent of North American consumer banking revenue has switched to the new digital models, investment bank Citigroup stated in its 2016 Digital Disruption report.

In order to increase awareness about digital banking, Jay and Luvleen Sidhu wrote a book titled “Why Can’t Banks Be As Easy As Uber?: BankMobile And The Real Future Of Banking.”

The book explains why the traditional consumer banking system is broken and not serving the people.

“Banking is stuck in the nineteenth century. That’s because banks still spend money on branches, in every neighborhood and business district around the country,” the authors wrote in the book.

“What they haven’t done is create the kind of experience you get on your smartphone from Uber and any of the thousands of other life-enhancing apps.”