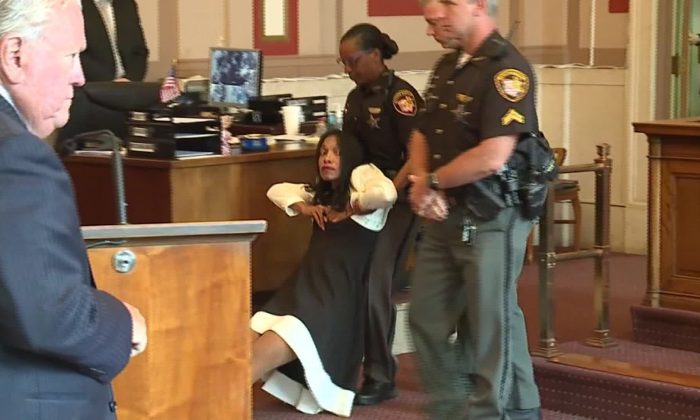 Former judge Tracie Hunter was dragged out of an Ohio courtroom after being sentenced. (WLWT via CNN)
US News

A Former Ohio Judge Was Dragged From Court After Her Sentencing

A former Ohio judge was dragged out of court after being sentenced to six months in jail.

A video on Youtube from CNN affiliate WLWT showed people jumping out of their seats and yelling at the judge and court staff.

A woman wearing a “Justice for Judge Hunter” shirt rushed at officers after the sentencing and was quickly taken into custody.

In the chaos, Hunter, showing little emotion, went limp and was dragged out of the courtroom by a bailiff as people screamed “No justice!”

The sentencing came after Hunter was found guilty of helping her brother, a county employee, keep his job, according to WLWT. She was convicted of having an unlawful interest in a public contract, a fourth-degree felony, WLWT reported.

Hunter had been free on appeal after being accused of mishandling a confidential document in 2014, according to CNN affiliate WCPO.

Despite a letter from the mayor and pushback from the community, Judge Patrick Dinkelacker imposed the six-month sentence, WCPO reported.

“What she wants to do is play by her own set of rules,” Scott Croswell, a special prosecutor during Hunter’s trial in 2014, said at Monday’s sentencing hearing. “That’s the very attitude and the very conduct that put her in the predicament that she’s in and, frankly, has caused all this pain to her and caused all this turmoil to the community.”

#BREAKING: Tracie Hunter to serve 6 months in jail. She was dragged out of the courtroom. Here’s the reaction from her supporters @WCPO pic.twitter.com/GM4BtTvl3b

The judge that handed Hunter the initial six-month sentence in 2014 had already been retired. He feels Dinkelacker made the right choice.

Attorney David Singleton defended his client to WLWT, saying he believes she was wrongly convicted. He asked the judge to delay her sentence because he plans to file a motion to dismiss the case.

“She’s lost everything almost,” Singleton said. “She lost her job as a judge, her law license, her ability to earn an income. She’s lost peace of mind.”

Hunter is being held at the Hamilton County Justice Center’s medical facility, WLWT reported, likely because of injuries she suffered in a car crash three decades ago.

Jail officials told WLWT Hunter will be evaluated to see if she can participate in any early release programs they offer.

“In court today, Judge Dinkelacker, many of the comments he made, made it seem very personal. He showed he was being vindictive when he decided to lock her up,” said Joe Mallory, first vice president of the Cincinnati chapter of the NAACP, via the Cincinnati Enquirer. “So, since he wanted to make it personal when he read all these postcards… he mentioned all the things that offended him… him receiving postcards at home… we decided to just go to his home so he could really see how we really feel about this unjust decision.”

“I wish for the neighbors’ sake, they weren’t here,” Dinkelacker told the Cincinnati Enquirer. “I have very old neighbors next to me. I’m sure they’re scared.”

Ohio Governor Mike DeWine said he would review a request for clemency, meaning the conviction would stand but Hunter would be released.

Hamilton County Prosecutor Joe Deters said the protest was “out of line.” He suggested that Hunter’s supporters address their concern via the courts instead of outside the judge’s home. He said showing up at a judge’s home is unprecedented in the county, the Cincinnati Enquirer reported.