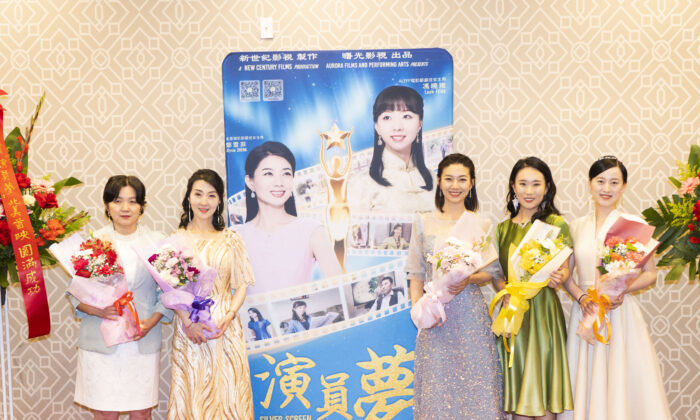 Based on the Chinese entertainment industry, “Silver Screen Dreams” reveals the darker side of the business, but its central message is how compassion can inspire hopefulness in the midst of life’s hardships and tribulations.

Sophie Song, the assistant director of the film, said at the premiere that, although the film is set in the Chinese entertainment industry, a setting that most audience members are not familiar with, compassion, as depicted in the film, is inherent in human nature and applies to everyone.

“Every one of us is a performer in our lives with different dreams and pursuits we wish to accomplish,” Song said. “Perhaps, the film can provide some insight on how to overcome despair and defeat.”

One of the lead actresses, Alyssa Zheng, said many scenes in the film reminded her of her past acting experiences in China, and she believes the film can give “strength and hope” to artists in the entertainment industry.

“There’s one line in the film that brings up a lot of emotions every time I ponder it,” she said at the premiere. “When the other female lead said, ‘Let bygones be bygones,’ it was not with feelings of surrender, despair, or sorrow. Instead, it was joyous, benevolent, and hopeful, and it really demonstrates one of the manifestations of compassion—forgiveness.”

“I’m a grown man, and I had tears in my eyes during the film,” he said. “If people have hatred stored in their hearts, it will only cause more pain and suffering to themselves. So cultivating one’s compassion and having relationships built on compassion, perhaps, would be one’s only way out.”

Princess Nkrumah, an actress currently in Los Angeles for her own film premiere at the AMC theater, was also in the audience at the “Silver Screen Dreams” premiere.

“As human beings, the number one thing that we need to learn is to treat each other with love, respect, and kindness, and I think that’s a wonderful message for anyone,” Nkrumah said.

The theme song, “The Voyage Home,” was also nominated for the Best Film Score award at the 2022 Burbank International Film Festival, after winning the Best Composer Honorable Mention award at the American Golden Picture IFF.

Following the premiere in Los Angeles, the production cast and crew will hold three more premieres across North America, from Vancouver in Canada to Middletown and Brooklyn in New York.