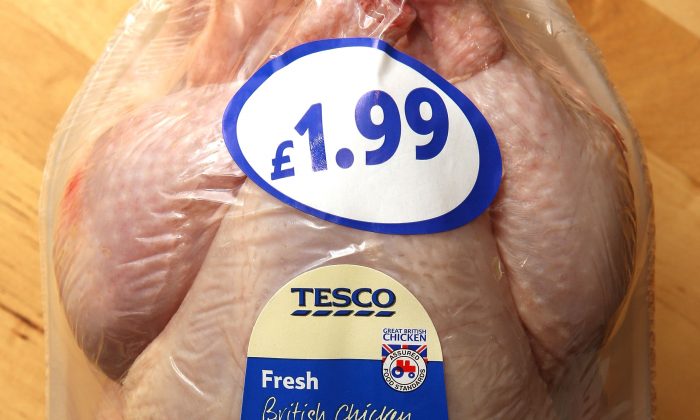 A cheap chicken purchased from a Tesco supermarket is displayed in London in this file photo. (Peter Macdiarmid/Getty Images)
UK

LONDON—More than a fifth of meat sold in the UK contains DNA from animals not listed on the packaging, new data from the UK’s food watchdog suggests.

Of 665 items sampled in 2017 by the Food Standards Agency (FSA), 145 partly or wholly consisted of meat other than the one specified. Some contained DNA from as many as four different animals, while others had no trace of the meat actually listed on the product label.

Test results were collected in England, Wales, and Northern Ireland, and were suggestive of “deliberate inclusion,” the FSA said.

The data was obtained by the BBC, which made a Freedom of Information request to the FSA.

The samples were obtained from businesses suspected by the FSA as having “compliance issues.” They included 73 retailers, 50 restaurants, and 22 processing or manufacturing plants.

The product most affected was mincemeat, with cow DNA the most commonly found meat type present that wasn’t labeled, followed by pig, chicken, sheep, and turkey. Ready meals such as curries and pizzas also were found to be affected.

The FSA said it mainly looked for samples of cow, sheep, pig, horse, chicken, turkey, and goat and that DNA from other animals could have been present but not identified.

The agency said it considered DNA at a proportion of 1 percent or greater evidence of “deliberate inclusion.”

The test results are “not representative of the wider food industry” and local authorities around the UK would need to take responsibility for investigating the findings, an FSA spokesman told the BBC.

Tests were conducted by less than half of the local authorities in the UK before they sent their findings to the FSA, meaning it is difficult to assess the full situation in the country.

Five years ago, a scandal erupted in the UK when horse DNA was found in frozen beefburgers sold by some British supermarkets. Following analysis, pig DNA was also found in many beefburgers, controversial because pork is a taboo food in the Muslim and Jewish communities (pdf).

The scandal highlighted a lack of traceability in the food industry, with many European countries conducting their own subsequent investigations into the issue.

Mislabeled processed meat was found in France, Norway, Switzerland, Sweden, and Germany, among others.

In mid-2017, two men were jailed in the UK for attempting to pass off 30 tons of horsemeat as beef.

Horsemeat was shipped by Danish firm FlexiFoods to a London-based company, where it was mixed with beef, repackaged, and relabeled as pure beef.

On the men’s sentencing, the judge said, “It’s difficult to recall now the conditions that made this horsemeat scandal headline news every day five years ago, but it made an impact on the public in general.

“They were suspicious of the food that they had—it extended far beyond meat.

“It was not an activity that was brought to an end by anything other than the arrest of the perpetrators.

“The victims in question, properly so-called, of conspiracy to defraud were customers, either wholesalers or the customers of the markets and supermarkets who bought an item that was not what it said it was.”