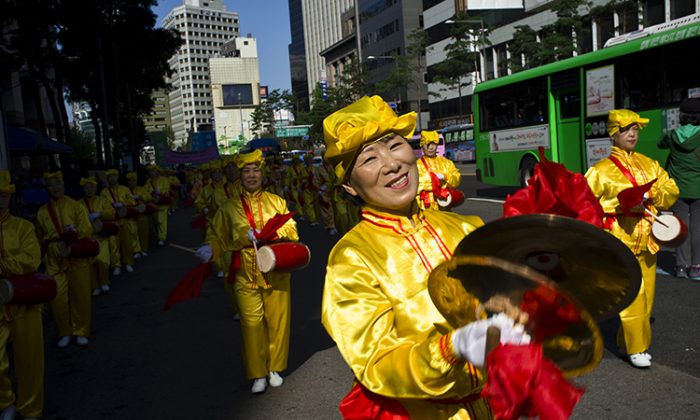 Members of the public stop to read the banners being held by activists in Myeongdong in Seoul. (Jarrod Hall/The Epoch Times)
World

A Festive Protest in Seoul (Photos)

Last weekend, I photographed a colorful parade that was held in one of the busiest shopping districts in Seoul. The prevalent mood was calm and friendly and the whole thing felt more like a party or a festival than a call for an end to the largest totalitarian dictatorship in the world.

There was a brass-band, a Chinese waist-drumming troupe and a hundreds, possibly thousands, of people holding banners. There were Koreans, Chinese, and a sprinkling of Westerners in the crowd. There were children in strollers, elderly people who looked to be in their eighties and every age in between. They were celebrating the withdrawal of 125 million people from the Chinese Communist Party and its affiliated organisations.

It was clearly not a patriotic march or an anti-China event. There was no aggression or anger shown. No effigies were burnt and there were no calls for revenge or retribution. In fact, recent South Korea-China tensions such as illegal Chinese fishing were not mentioned at all.

Here are some figures for you. According to the World Bank, there were 1,344,130,000 people in China in 2011, of that number only about 80,270,000 are officially members of the Communist Party. Now you might be asking, how could 125 million people have withdrawn from The Party when there are only over 80 million members? Because almost every single child in China must pledge to love and serve the Chinese Communist Party when they are still in school. So what many people are doing is effectively unpledging. They are swearing that they have no love for the Chinese Communist Party and no longer wish to serve it.

On it’s website, the Global Service Center states: “Many recall their suffering under Great Leap Forward, the Cultural Revolution, or the suppression of Falun Gong. And where some people were victims of the Communist Party’s numerous violent campaigns, others were the perpetrators of human rights violations, now seeking absolution and forgiveness for their complicity.”