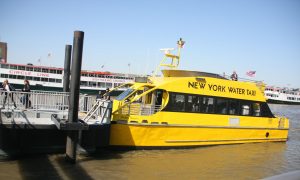 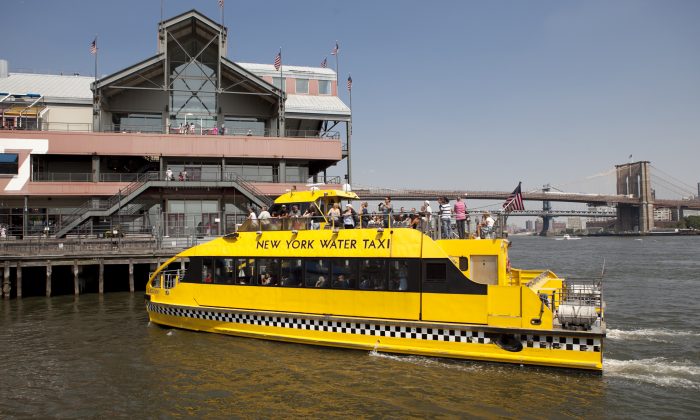 NEW YORK—New Yorkers can now take a ferry from West 39th Street in Midtown Manhattan to Red Hook in Brooklyn for $9, a new route that is expected to benefit residents and businesses in the transit starved neighborhood.

Riders could previously get to Red Hook with an all-day pass ($31 for adults and $19 for children), or through the $5 IKEA express shuttle at Wall Street’s Pier 11, which is still an option.

Riders can take the one-way $9 trips with New York Water Taxis (NYWT) from Midtown, Downtown, and DUMBO to Van Brunt dock in Red Hook, right near a Fairway Market, restaurants, and shops.

Free ferry service began last summer, sponsored by the city as a way to support local businesses and revitalize the Sandy-stricken neighborhood. Nearly every business along Van Brunt Street, a main commercial corridor near the water, had been flooded and damaged.

Red Hook is just outside of public transit’s reach, situated south of DUMBO, and along the Brooklyn waterfront. It’s attracted less residential development than adjacent neighborhoods largely because of the lack of transportation options, and maintains an industrial feel.

The neighborhood has blossomed with artisans and attracted businesses that have relocated from Manhattan, McCabe said, but a lack of transportation makes it hard for businesses to grow.

“I think it’s a very exciting destination,” McCabe said. “[Red Hook] has always suffered a little bit from lack of connectivity, and I hope what we do brings that connectivity, and helps those small businesses expand.”

“Viable transportation can open up huge new opportunities for employment for our young people by making commutes far more timely and reliable,” Bryne said. “It opens up access to consumers who would enjoy patronizing our local businesses, and helping our economy rebound, as we all still struggle with Sandy debt.”

The $9 one-way tickets are in addition to the $5 IKEA shuttles that run now. The express shuttles run from Pier 11 in Lower Manhattan directly to the IKEA store in Red Hook, and are free on weekends. IKEA also offers refunds for the tickets with purchases over $10.

Service to Red Hook has been popular. Over 100,000 riders took the ferry the first summer in 2013, so the city extended service for four more weeks. NYWT, East River Ferry, Fairway Markets, and IKEA had sponsored the ferries along with the city.

This summer ridership was even higher, according to NYWT press releases. Service continued without city subsidies and ferries ran directly to Fairway and IKEA stores. The success prompted NYWT to continue the service.

In the winter, McCabe said he expects most riders to be Red Hook residents commuting to Manhattan. Come next summer, he expects the reverse, with New Yorkers from other parts of the city, and visitors coming into Red Hook to visit the local businesses.