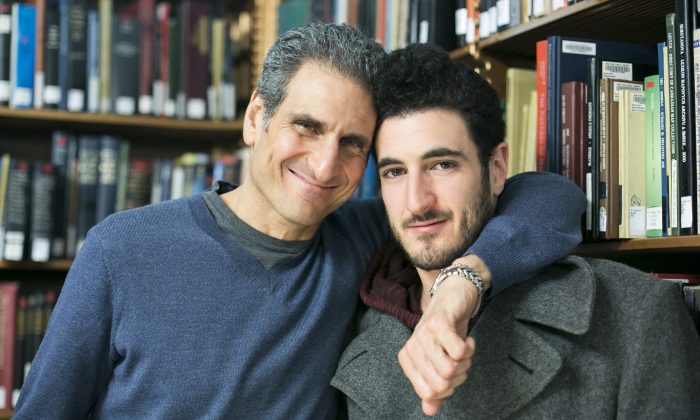 Joseph and Jared Cohen at the New York Public Library on March 26, 2015. (Samira Bouaou/Epoch Times)
US

His father could not communicate well, so he vowed to be a different kind of dad
By Mary Silver
biggersmaller
Print

When Brooklyn native Joe Cohen visited his father’s workplace as a child, he felt like a VIP.

“He was the man. You walked in—I was like a prince because I was Alby’s son,” said Joe Cohen.

Albert Cohen was a foreman at a plastics factory, responsible for hundreds of workers, and the father of three boys. He was a man of honor. His word was his bond, according to his eldest. He was soft-hearted and generous. “Season tickets for the Giants, the Knicks, coach, umpire, he was involved. I was into sports.”

Albert Cohen was there for his son, physically. But he was the stoic child of immigrants from Aleppo, Syria, not a man of words. “Going to work was what he did.”

His son yearned for openness between them. It pained him that his father “did not know how to communicate.” He vowed to do this one thing differently for his own child.

Letters to His Son

When Joe Cohen’s son Jared was 7 years old, he began to write his son letters. The letters advised, they praised, they admonished, they encouraged, and they asked questions. “To acknowledge when things went well, I would write a letter to Jared.”

When he went to summer camp, when he achieved something, when he faced a problem, his father would put pen to paper.

He wanted to give his child all the paternal words he had missed. At first, the communication was one way.

Jared did not reply when he was a young boy. “It was like a ritual,” receiving the heartfelt letters, he said of the experience. “It was a way to connect with me on a deeper level.”

But he wrote a poem that won an award. He started to create short stories. Later, he wrote back to his father, and the letters became a dialogue.

He wrote back to his father, and the letters became a dialogue.

Jared became a writer, and the two men eventually co-authored a book, “Like Father, Like Son: The Unexpected Impact of Letters from My Son.”

“Through the letters and stories we see how a man struggles to be a better, more accessible father than the one he knew. We see a boy mature and become a young, responsible man of insight and compassion. Through this compelling book we see how much the world needs fathers. Good fathers,” wrote Alfred Guart, who was an investigative reporter for the New York Post, and a journalism professor at St. John’s University. Guart and the elder Cohen were friends at Brooklyn College, and colleagues at the campus newspaper.

The family faced a test when Jared was around 12. He seemed to be taking his parents for granted, his father said. At the time his mother was a primary school teacher in an Upper West Side private school. She saw children who felt entitled, and they did not want Jared to become one of them.

So his father wrote him:

“Dear Jared. There are very few things that I enjoy as much as watching your face light up with a smile as your arms wrap around me.”

He described good memories of cooking together, listening to Eminem in the car, playing chess, and snorkeling.

“Those and other memories, and the time we’ve spent together are amongst my most cherished things in the world. I’m glad that we’ve become so comfortable with each other. But I feel hurt when sometimes you don’t cooperate after getting an explanation, or you speak disrespectfully.”

In the lowest moment of the book, the elder Cohen loses his temper and slaps his son with a baseball glove, at Seton Park in the Bronx. He wrote his son a letter about it:

“Afterwards, you were surprised and angry. I was upset and very serious.

We all make mistakes, and I don’t expect you to be perfect. I certainly am not. However, you are mature enough to understand the importance of this message. Mistakes are part of growing up and can be the tools that help us grow wiser and become better.”

They engaged tutors and joined family therapy. Jared matured, and his grades improved.

Jared made friends, was captain and MVP of his soccer team, and went to college. He made the Dean’s List, won an award, traveled abroad, and developed the gratitude his parents had hoped for. He graduated. Now he is a part-time D.J. and he works full time for Flying Point Media in New York, which he describes as a wonderful workplace.

As he made academic and personal progress, his father made a big change, too, reinventing himself at age 45 by returning to school and changing careers. Now he is an editor, a writer, and a personal coach.

Find the love in others and the joy in each moment and you shall always be free.
— Joseph Cohen

Both traveled a road that had twists and turns, suspense and triumphs, sorrows and surprises.

In 2011, on his 21st birthday, Jared described how he felt about the letters. He thanked his father for his years of support, and wrote, “In another letter, discussing my behavior as an adolescent who couldn’t see much beyond his own desires, you wrote, ‘”Words fill the air, actions fill my heart.”‘

As a young adult, he was ready to describe what his father’s parenting style meant to him:

“What is important to me, Dad, about this quote is that not only did you tell me … but you showed me.

You also wrote, ‘Find the love in others and the joy in each moment and you shall always be free.’

I want to thank you for the wisdom that you have imparted to me in so many letters; even when I didn’t know, and couldn’t conceive of, what would give me joy and clarity as I grew older, you knew that fostering self expression was a road that would lead to something meaningful …