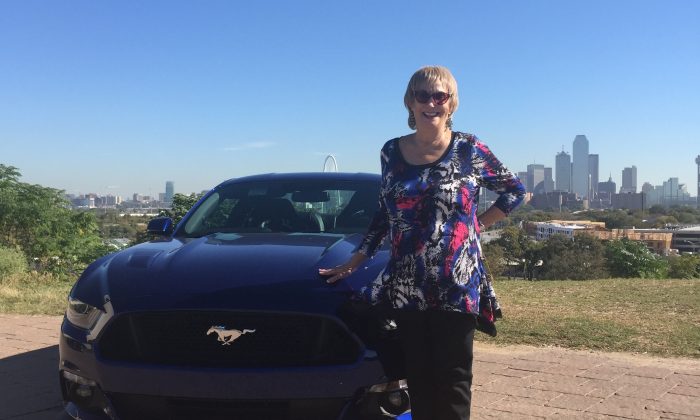 I’ve loved Ford’s Mustangs since I was very young, or since the 1964 Mustang first dazzled all of us with its beauty, speed, and best of all, affordability. Here was a performance car that ordinary people could buy!

I recently watched a fascinating documentary titled A Faster Horse. It shows how Ford Motors continues to keep founder Henry Ford’s initial promise to the American people. Ford promised to give them exactly what they told him they wanted, back in an era when most people still owned a horse. To put it simply, they all wanted “A Faster Horse.”

The doc (now available at Video on Demand) follows Team Mustang—a dedicated group of designers, engineers, and other professionals based in Dearborn, Michigan at the facility where the first Mustang was developed. The team was led by Chief Engineer Dave Pericak, who says he fell in love with Mustangs as a teenager. Later, as a young Ford engineer he borrowed a Mustang from his boss, drove it to pick up his girlfriend, and proposed to her.

Pericak and Team Mustang spent over five years working on the new 2015 Mustang, so it could appear in dealerships across the world in time for the iconic brand’s 50th anniversary celebration last fall. “From day one, we knew if we were going to build a new Mustang, we had to do it right,” said Pericak. “We built a new Mustang from the ground up that is quicker, better-looking, more refined and more efficient, without losing any of the raw appeal that people have associated with Mustang for half a century.”

This Pony car leaps ahead of the pack wherever you go.

While watching their long journey to build a new Mustang that would satisfy the legions of passionate fans and owners around the world, where the Mustang is more than a car but a symbol of American strength, I was riveted by the historic footage in the film. It seems Ford VP Lee Iacocca and his supporters had difficulty selling the concept of the 1964 Mustang to Henry Ford II, since their idea came too soon after the company’s biggest disappointment, the 1957 Edsel.

Ford reluctantly gave them a budget of $45M (about half their requested amount) to build the Mustang. The concept car originally had a Cougar as an emblem, but this was replaced by the spirited Mustang emblem early in the design.

When the 1964 Mustang was revealed it made the cover of Time and Newsweek Magazines and captured the hearts of people all around the globe. The Edsel was quickly forgotten as Mustang Mania took over.

Like Mr. Pericak, my love affair with Mustangs started when I was young, but my most recent experience driving a 2015 GT Premium Fastback raised my passion to an even higher level. With its 5.0 L V8 engine and a 6-speed manual transmission, this Pony car leaps ahead of the pack wherever you go. The GT goes from 0 to 60 mph in less than 5 seconds.

It seems a shame to drive this powerful Mustang GT on city streets, where fuel economy is not too good (15 mpg). It begs to be taken to the freeway, where it can run faster and further and even get better gas mileage of 25 mpg. This type of performance is far more valuable to most Mustang lovers than any amount they might save at the gas pump, especially now with gas prices plummeting downward.

For those wanting to save on gas, the Mustang is also available in a 3.7 L V6, or a 2.3 L EcoBoost engine that is more fuel efficient with a combined 25 mpg.

My test model was such a beautiful car that it seemed a shame not to slow down so others could feast their eyes on the GT. Painted a Deep Impact Blue with Premium Color Trim that included an Ebony interior, leather Recaro sport seats, raised blade deck lid spoiler, and 19-inch Ebony painted aluminum wheels.

A favorite fun touch was the Pony emblem that is projected next to the Mustang when you park it, proclaiming “this spot is reserved for a Mustang.” As if driving the Mustang isn’t enough entertainment, Ford had added SiriusXM Satellite Radio with 12 speakers, plus SYNC 3 for all types of communication with the outside world.

There are Mustangs available that are more affordable, such as the 3.7 L V6 that starts at only $23,895 with fuel economy of 28 mpg on the highway. But for those of us who would rather be driving a super sweet Mustang than doing almost anything else, the Mustang GT with its 5.0 L V8 engine produces the kind of deep rumbling satisfaction that rock legends like Mick Jagger and the Rolling Stones were probably missing when they lamented, “I Can’t Get No Satisfaction .”