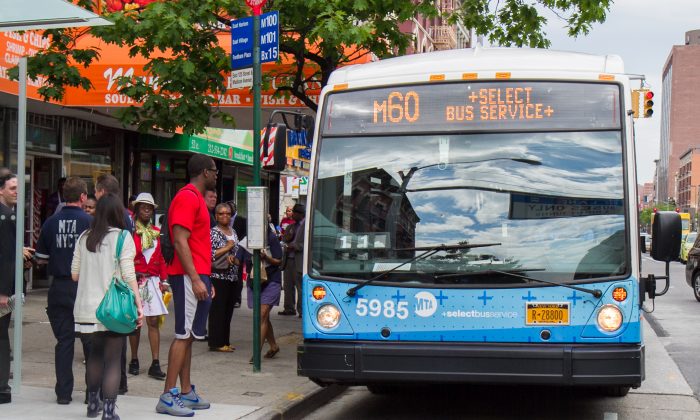 People wait to board the new M60 Select Bus Service in Harlem, Manhattan, on May 27, 2014., (Benjamin Chasteen/Epoch Times)
New York

This means nine fewer stops in each direction and off-board fare payment, cutting the hour-long ride down by over 10 minutes. There is no additional fee for MetroCard users, but riders must keep proof of payment (machine-dispensed receipt) through the duration of the ride.

“I know a lot of people thought this would not move forward at one point,” said City Council Speaker Melissa Mark-Viverito, the representative for the district the service begins in. “This is a great day for East Harlem.” City and transit officials gathered at Madison and 125th Street Tuesday morning to celebrate the launch of the service.

Discussions began in 2011 and the Department of Transportation and Metropolitan Transportation Authority have had over 50 meetings with communities and elected officials. About a year ago officials deemed the project would not move forward. The M60 is the city’s seventh SBS line and a step forward for mayor Bill de Blasio’s goal to reach 20 routes citywide.

According to the DOT website, prior to creating the SBS route, the M60 crawled along at a pace of under 3 mph—even walking would be faster.

But the current route does not make expedited stops until Lenox Avenue on 125th Street, Levine said.

Lack of community support that original stalled the project resulted in keeping many ore stops in West and Central Harlem, but officials say they see growing support for the service in the western neighborhoods now.

“As they [the SBS routes] go up and communities see the benefits,” DOT Commissioner Polly Trottenberg said, “hopefully that will speed up the process.”

While there is no direct subway or rail route to LaGuardia airport, councilmember Ydanis Rodriguez, chair of the transportation committee, said the M60 was a big step forward to updating the aging airport.

Over 33,000 daily riders use buses on 125th Street, including 10,000 daily M60 users. The other SBS routes have cut travel times by about 20 percent and increased ridership by about 10 percent, according to the MTA.

There are safety benefits as well, in line with the mayor’s Vision Zero vision of reducing traffic-related deaths to zero in a decade.

A mile of red lane markings and new parking regulations were added to the 125th Street corridor. Over 200 residential parking spaces were added on 124th and 126th Streets and metered parking was modified on 125th Street because it is primarily commercial.

The M60 route cost more than $6 million with contributions from DOT and MTA. The mayor has added $90 million to DOT’s budget for SBS expansion.