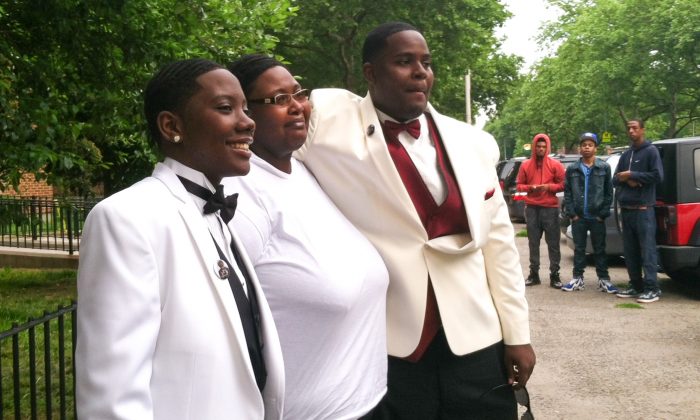 A Family Bond and Hopeful Moment

NEW YORK—In the midst of a week of profound sadness and terror, the family of 7-year-old stabbing victim Mikayla Capers can see a glimmer of hope. The great aunt and cousins of Mikayla, who is hospitalized after being attacked on Sunday, decided to go to prom just before police apprehended the prime suspect in the attack.

Brigette Capers, 45, and her children Shakira Capers, 20, and Christian Capers, 18, stood outside of the building in East New York where their young relative and her friend were attacked on Sunday. Mikayla doesn’t know yet that her best friend, 6-year-old Prince Joshua Avitto, did not survive.

“She is doing so much better,” said Brigette Capers, who has helped raise Makayla. She said the little girl isn’t able to speak yet and must communicate by squeezing her aunt’s hand. She is expected to recover. “Physically she will be fine, but mentally she has a long way to go.”

“She is a strong young lady,” Brigette Capers said, and added that Makayla hasn’t undergone any surgery.

The community gathered for the family as the grads waited for their limo ride to prom, arranged by community organization Man Up. People gathered around to take pictures and encourage them.

At a town hall meeting around the same time, the community gathered to get an update about the situation.

“It’s sad that it takes tragedy for the community to come together, but they are,” said Joseph Arlequin, an employee of Man Up.

With additional reporting by Amelia Pang.