Book Excerpt: 'When It Was Just a Game'
0
Share Now
TelegramFacebookTweetEmailTellMeWeReddit
Copy Link 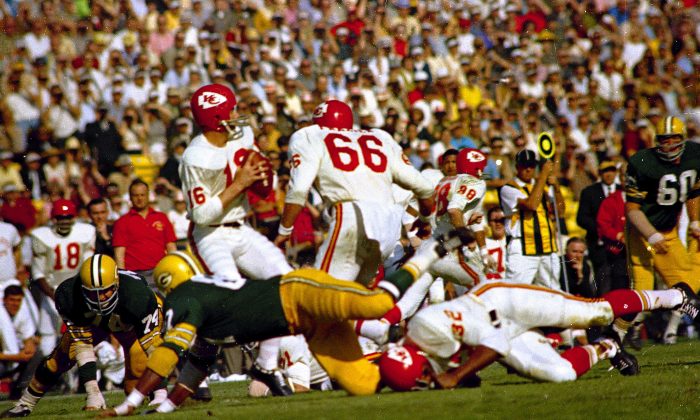 A Dozen Things I Learned Researching, Interviewing, Writing ‘When It Was Just a Game’

1. Pete Rozelle hung out in a Miami Hotel men’s room for a couple of hours and adjusted his tie, looked away, washed his hands whenever anyone entered. He later guessed that he had washed his hands 35 times while waiting before he got the news—at 33 he was the new NFL Commissioner.

2. At American Football League NY Titan games in the Polo Grounds, owner Harry Wismer would count the number of legs sitting in the park, and then multiply by four instead of dividing it by four to get an estimate of the attendance.

3. The “whammy” Super Ball was the inspiration for the name SUPER BOWL. Pete Rozelle and other powers thought up and suggested AFL-NFL Championship Game, the Pro Bowl, the Ultimate Game, the Big One….

4. Vince Lombardi out of Sheepshead Bay in Brooklyn, an altar boy at his local parish, had never held a head coaching position beyond the high school level when he showed up On February 2, 1959 as a tough talking and determined 45-year-for a meeting with the Green Bay Packer Executive Committee. They were interviewing him for the head coaching job. He wound up hired as head coach and general manager.

Related Coverage
Book Excerpt: ‘When It Was Just a Game’

5. Elevated on the blocking sled, Lombardi was fond of exhorting his players to do nutcracker drills. Blood flowed freely.  The Packers worked out with cracked ribs, broken bones and torn cartilage. Dehydrated players were sometimes sent off to the hospital.

6. In the Packer locker room at Lambeau Field there was a big sign:

What You See Here

What You Say Here

What You Hear Here

When You Leave Here

7. BILL CURRY: Coach detested racism or any other prejudice. He wouldn’t tolerate it. He had experienced it because of his Italian-American background. Other teams had quotas; they would only have 1 or 2 African-American players. And Coach Lombardi didn’t believe in that stuff. We had 10 guys on the team at times that were African-American.

He didn’t care what your pigmentation was if you could play, and that was a great lesson for a southern kid coming up. I had never been in a huddle with an African-American until I got to Green Bay.

8. Hank Stram of the Kansas City Chiefs was Lombardi’s opposing coach in the big game.

Coach Stram’s attention to detail was evident in everything like having Dial yellow soap in the showers. He thought it reduced infections. Like practicing over and over again the right way for a punter to give up a safety in his own end zone, to how the team would run out on the field to warm up, to replacing every shoe lace in every shoe prior to every game, to all kinds of rituals and beliefs.

9. Both Stram and Lombardi were very religious, had one or more priests traveling with them and on the sidelines during games. Both coaches quoted scriptures.

10. That first AFL-NFL Championship Game was played on January 15, 1967. It was the only “Super Bowl” game to be telecast by two television networks, the only Super Bowl to fail to sell out. Tickets at $15, $12, $10 were thought to be over-priced and no one knew exactly what the new game was all about especially with two Midwestern teams in it.

11. The Chiefs under Stram and the Packers under Lombardi had no quotas of any kind and they did so much for diversity in pro football.

It was estimated that there were more African American athletes on the field that first Super Bowl day, than at any other time in the previous history of a sport that saw the NFL draft start in 1939 with no franchise selecting an African-American player until 1949. Even during World War II, when the NFL was so shorthanded, no blacks needed to apply. They knew bigotry barred the door for them.