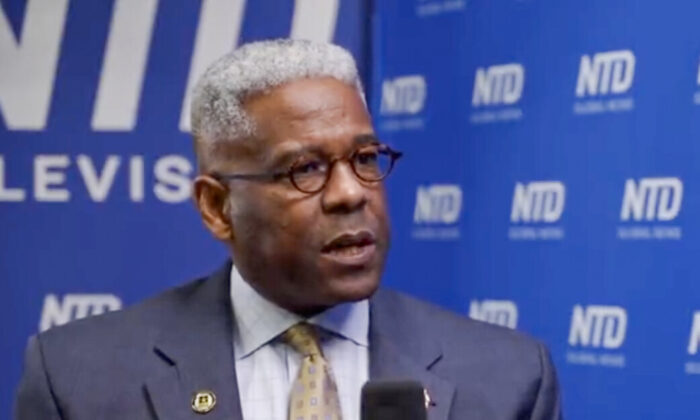 Lt. Col. Allen West in an interview with NTD's Capitol Report on June 8, 2022. (NTD/Screenshot via The Epoch Times)
US News

‘A Disarmed Individual Will Be a Subject,’ Not a Citizen: Lt. Col. Allen West

As new gun control legislation makes its way from the U.S. House to the Senate, where enough Republican senators have indicated they will vote in favor of it, opponents of the bill say these laws already exist and have not—and will not—stop mass shootings.

Instead, what history has shown, retired Lt. Col. Allen West said, is that these laws will put Americans on the path to losing the right to bear arms, and people becoming subservient to the government and its tyranny.

West told NTD’s Capitol Report during a recent interview that the Founding Fathers created the Bill of Rights and Second Amendment because “they realized that an armed individual can be a citizen, a disarmed individual will be a subject.”

“Every single instance where the government, totalitarian, tyrannical governments have removed private gun ownership, what did they end up doing? They turn citizens into subjects,” West continued. He noted that Canada’s progressive government has just tightened the buying of firearms and he fears the United States will follow that example.

The regimes of Germany’s Adolf Hitler and Venezuela’s Hugo Chávez took away gun rights before clamping down on citizens, taking more of their rights and killing their own citizens, said West.

One controversial part of the Democrats’ new bill would create a universal background check system, but West said most states already have background check requirements. So, codifying them would not change much except to infringe upon the rights of lawful gun owners.

Democrats’ new gun control bill seeks to give “resources to states and tribes to create and administer laws that help ensure deadly weapons are kept out of the hands of individuals whom a court has determined to be a significant danger to themselves or others.”

Their legislation also includes a so-called red flag provision, but these laws are already enacted in many states across the country, and can actually be used indiscriminately against law-abiding citizens by omitting due process.

Generally, these types of laws allow almost anyone to bring a claim to an emergency court hearing alleging that another person is mentally unwell and is a danger to themselves or others. If the court accepts the claim, the person targeted can be “flagged” and prevented from buying firearms and can have any firearms in their possession seized by police.

West said the problem is that mentally disturbed or dangerous individuals, like many of the mass shooters, “fall through the cracks” of the gun control system, which includes background checks and red flag laws.

Mass shooters including Devin Patrick Kelley, Dylann Roof, and Seung-Hui Cho all managed to legally purchase a firearm, even though each should not have according to the Bureau of Alcohol, Firearms, and Explosives’ own criteria during a background check.

In Uvalde, however, where the shooter purchased his rifles from a private dealer, there was no law requiring those private firearms dealers to initiate background checks before transferring the firearm to the shooter.

In a recent letter, 13 Texas Senate Democrats urged their colleagues to pass legislation that raises the minimum age to purchase a firearm from 18 to 21 years old and enact universal background checks.

“Texas has suffered more mass shootings over the past decade than any other state. In Sutherland Springs, 26 people died. At Santa Fe High School outside Houston, 10 people died. In El Paso, 23 people died at a Walmart. Seven people died in Midland-Odessa,” the Democrats wrote in the letter.

“Why were those individuals not put into a system, so that they would not be able to go out and purchase firearms?” said West.

He said the state of Florida does background checks and red flag laws with due process, and Congress should shore up the laws already in place.

“They bring individuals in if they see some disturbing things on social media, they continue to follow and track these individuals. If it escalates, then they kick in, you know, a gun confiscation of that individual but they have built the case,” said West.