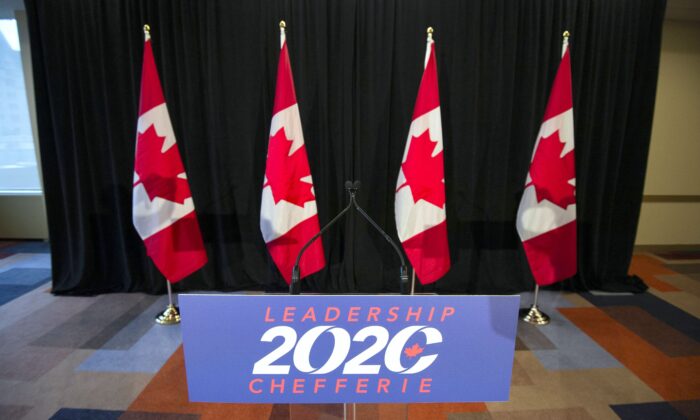 The lectern where the new leader of the Conservative Party will take questions from reporters is seen in Ottawa, before the announcement of the new leader, on Aug. 23, 2020. (The Canadian Press/Justin Tang)
Viewpoints

A Defence Policy Speech for the Next Tory Leader

Yet another candidate has lurched into the federal Conservative Party leadership contest boasting about the winnability of his winning winnery. It is not clear whether Canadians’ appetite for such cliches, such as it was, has diminished. But since the Ukraine crisis seems to have opened an Overton window to more serious discussion, here’s a free speechwriting sample for Patrick Brown, Jean Charest, Pierre Poilievre, Leslyn Lewis, Roman Baber, or whoever next staggers onto the stage.

My friends, I stand before you at a perilous time in our history. Russia’s invasion of Ukraine has been a shock to many of us. It has exposed the hollowness of our comforting illusions about the state of the world and our security policy. If I am elected leader of this great party, then entrusted with the office of Prime Minister of Canada, I will spend more than the 2 percent of GDP we promised NATO on our military and make defence of our national interest the core of our foreign policy.

These are not the soothing cliches you are used to hearing from people like myself, cliches you could write yourselves without effort or, I suspect, interest. Blah blah blah outreach… people who have never voted conservative… consultation… big tent… cultural communities… effective climate change policy down with Trudeau’s carbon tax… Canadian values blah blah blah. Not a principle in sight. All about winning and ill-suited to it. Dismissive of core beliefs and firm positions. Soothing but hollow.

If you want that stuff, plenty of candidates will offer it. I hear Erin O’Toole is looking for a job. And if I have my way Justin Trudeau soon will be too. But only if members of this party, and Canadians, have an appetite for bracing truth instead of reassuring inanity.

For instance, I said “military” and “national interest.” Hard-edged words, not stale tripe about the world needing more Canada, a moral superpower. But my strategy is to build a big blue tent of sturdy fabric on solid ground and invite people in, not dance about weaving an insubstantial net around them wherever they are.

So yes, military. Guns. Stuff that goes boom, breaks things, and hurts people. Subs that float. The world is a deeply imperfect place filled with appalling regimes and as in two world wars we must be ready to fight for home, hearth, and values. We must ally with like-minded nations to protect ourselves, and be practical and prudent about what we can and cannot do. We need missile defence, cyberdefence, and spies hunting down “dark money,” subversion, and theft of industrial and military secrets. Real-world things.

It gets worse. To raise defence spending from $21 billion to $50 billion, we must cut in other areas. I’ll talk more about fiscal policy in another speech you also won’t like. But we’ve seen this administration brush aside Parliament to hand out cash we didn’t have on priorities we hadn’t considered based on economics that don’t work. It would have to stop anyway, and the international crisis makes it urgent. What will we do if China invades Taiwan? Send a postcard? Change our Twitter images? Or send gunboats alongside our Western allies?

Some of you may be thinking it doesn’t sound like a winning platform. But here’s the thing: The Conservative Party is the reality party. Others peddle illusions. I’m not saying they are lying. If only they were, because then they’d know not to try to implement their promises. But in the social democratic big tent, they really think saying something makes it true. And we’re not going to win a bidding war with them so why disgrace ourselves by trying?

We’re the party people turn to when the party stops. When printing money spawns inflation not plenty, legalism-moralism brings disorder and invasion not global harmony, and abolishing all standards brings chaos not true human fulfillment.

I have many unattractive proposals to share with you over the next few weeks. And with suburbanites, cultural communities, soft Quebec nationalists, and all the people we must attract to win while holding our Western and rural base. The pitch the whole way will be that it would be great if life were a bed of roses, but since it’s not we’d better buckle down to the hard work of weeding, pruning, and fighting pests. And nothing about domestic policy matters if you get foreign policy sufficiently wrong, as Ukrainians can tell you today and Poles, Norwegians, Danes, and the French could have in 1940.

If I am elected prime minister, we’re going to get that stuff right, with a hard-edged, hard-headed security policy that emphasizes preparedness and puts our national interest first.

P.S. As priorities we will harden key infrastructure against electromagnetic pulse, boot Huawei out of our communications backbone, and go after money laundering.