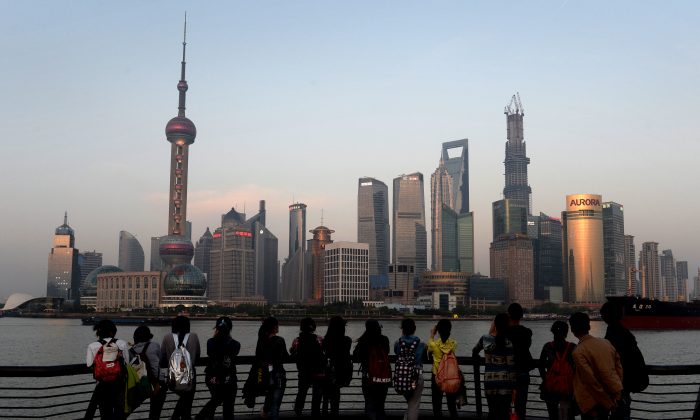 Tourists watch the sunset over the Pudong financial district of Shanghai on April 15. China’s economic growth slowed to 7.7 percent in the first quarter, data showed, below expectations and fuelling concerns that a recent recovery is faltering on subdued overseas demand. (Mark Ralston/Getty Images)
China

Structural weaknesses a concern
By Heide B. Malhotra
biggersmaller
Print

Market analysts and investors view the Chinese state through rose-colored glasses believing that it is a country that will rise to economic power. They ignore any signs of trouble, be it the lack of transparency concerning economic data, local government debt, real estate problems, fraud, corruption, or political interference.

“While it is true China has seen dramatic improvements in its economy over the last 30 years, my view has been and remains that most of the ‘growth’ of the China ‘miracle’ is just a debt-fueled bubble built upon a loose foundation of Government corruption and fraud,” a March 21 article on the Gains, Pains & Capital website suggests.

Concerning fraud, the above article states that based on a Central Commission for Discipline Inspection of the Communist Party (CDIC) report, $1 trillion was taken unlawfully out of China in 2012.

According to recent media reports, Xiang Huaicheng, a former finance minister of the Chinese state, indicated during a recent forum that local governments in China have borrowed over $3 trillion, while a March Epoch Times article cites Lou Jiwei, the Chinese regime’s new finance minister, as stating that local government debt is around $1.77 trillion.

A March 28 article on the InvestmentWatch blog cites Huatai Securities, a Chinese securities broker, as stating that Chinese local government debt could amount to $2.5 trillion this year or close to 30 percent of China’s GDP.

Most information concerning the Chinese regime’s debt issue has been taken from reports coming out of China. An April 11 article on the Seeking Alpha website discusses trade-related information, warning, “We can never really trust any data that comes out of China.”

Agreeing with the Seeking Alpha article, a March 21 Gains, Pains and Capital article states, “One of the top-level Chinese politicians admitted in private that China’s economic data is a total fiction.”

Waiting until the Chinese markets closed on April 9, Fitch Ratings, a global rating agency, announced that it had downgraded China’s long-term local currency from AA- to A+, but retained the outlook as stable. In plain language, the credit quality changed from a high credit quality to a medium credit quality. But the rating is still considered as investment grade.

Fitch’s two counterparts, Standard & Poor’s (S&P) and Moody’s, have not changed their local currency ratings. S&P assigned an AA- rating on Dec. 16, 2010, and kept the outlook stable since that date.

Moody’s upgraded China’s local currency rating from A1 to Aa3 in May 2011, according to the countryeconomy.com website. However on March 12, Moody’s assigned a “credit negative for regional and local governments,” according to a Special Comment published on its website.

The Fitch announcement first points to all that is positive with China, including its foreign reserves, which were valued at $3.4 trillion at the end of 2012, far more than the Chinese foreign currency denominated debt of $34 billion.

However, there are a number of structural problems that heighten the risk to China’s financial stability, including the country’s export-driven market, while downplaying local consumption in China.

“The process of rebalancing the economy towards consumption could lead to the economy’s performance becoming more volatile,” Fitch states.

Also problematic is the lending to the private sector, which had reached 135.7 percent of GDP in 2012. Estimating the country’s total lending, which includes shadow banking, Fitch states that credit may have reached 198 percent of GDP at the end of 2012.

Shadow banks are entities that borrow money in the short-term and invest it in long-term assets. These entities are not depository institutions and are not regulated.

“The proliferation of other forms of credit beyond bank lending is a source of growing risk from a financial stability perspective,” the Fitch announcement states.

“The case for future positive rating action would be strengthened in the event that China improved the transparency of its official data, in particular the indebtedness of local governments,” the Fitch announcement advises.

Fitch downplays the importance of local currency ratings and states in a report that a national rating is unique for every country and positions the risk of default based on the local economic and political environment.

Fitch qualifies its opinion by stating that a national rating does not “represent a fixed amount of default risk over time,” according to the Fitch report.

Fitch took action because the Chinese regime’s local government debt is of concern to the international investment and lending community, especially as the exact amount of the debt is not known. However, the official foreign reserves in the Chinese state’s coffers alleviates some of the concern expressed by the international community.