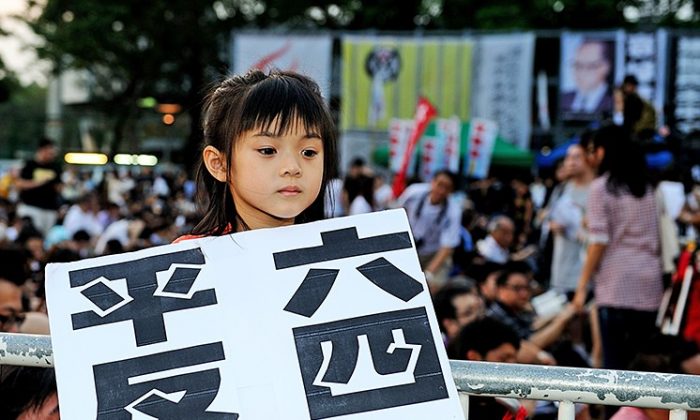 A young participant in the commemoration of the Tiananmen Square massacre held on June 4, 2012, in Hong Kong holds up a poster saying “Redress June 4.” (Sung Pi Lung/The Epoch Times)
China

A Murder on Tiananmen Staged to Peddle a Lie, Witness Says

The Chinese regime’s propaganda about the events of June 4, 1989, has always claimed the soldiers were there to put down a violent mob. One eyewitness saw a murder that has been used to peddle that claim.

The death of the soldier Cui Guozheng was widely used by the state-run media as evidence that the students were manipulated by a small group of thugs who were trying to initiate a large-scale anti-Party revolt.

According to Zhao Zhen (alias), seven or eight people started to beat Cui with thick metal sticks around “70 to 80 centimeters long” (about 30 inches) among a large crowd on Tiananmen Square.

Cui cried out for help, but the beating did not stop. As soon as Cui was unable to move, the men poured gasoline on him from a bottle, and set his body ablaze. Zhao said that Cui’s body twitched while he was on fire.

“Those thugs [after beating and burning him to death] talked about cutting his stomach open and displaying it to the public. … They were definitely not citizens or students,” said Zhao, who added that the student protesters did not have weapons. Zhao said the thugs were soldiers disguised as protesters.

“At that time, the crowd was furious. After this event took place, people were not able to make a calm observation or analyze the real situation,” said Zhao. “I remember that more people [among the crowd] did not agree with the killing of Cui because they did not want to appear to be violent protesters.”