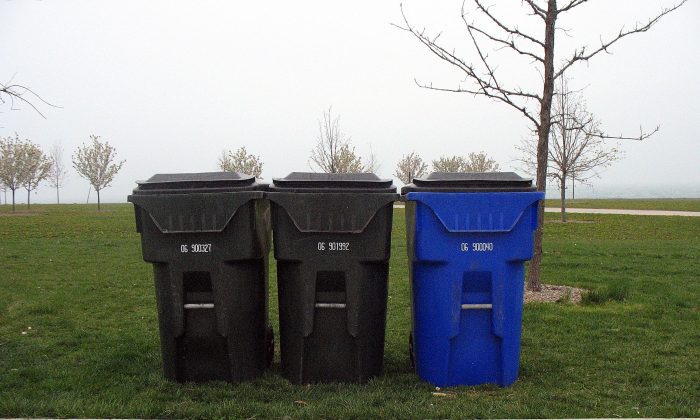 How much of what you recycle ends up at the dump?

Do you cross the street to put your soda can in the recycling bin or avidly pluck plastics and paper from your neighbor’s trash cans? The current state of recycling in the United States may surprise you.

It’s in trouble for many reasons, including two straightforward ones. Most programs dump everything together—and consumers are confused about what goes into their recycling bins.

Single-stream recycling, first developed in the 1990s, offers the allure that everything can be recycled without duplicating efforts to handle paper, plastic, glass, and metal refuse. Creating a single blue bin where people can toss all kinds of recyclable items did away with the need to separate your bottles from your cans from your newspapers.

When your commingled recyclables arrive at the facility, they travel along conveyor belts where someone manually pre-sorts them. Then the stuff goes through a series of screens that separate items by weight and shape, and strong magnets mechanically sort the steel and aluminum products.

Recycling Abandoned Pasture May Save Forests

Falling Oil Prices Only the Latest Problem for Recycling Industry

Nearly two-thirds of U.S. communities that recycle used this approach by 2010.

The single-stream system sounds great, but it’s not perfect. The biggest problem is that contamination can occur at your home or workplace, in your curbside bin, at the sorting facility, or on the way there.

For example, glass bottles can break and sully plastic and paper bales with broken shards, making them unfit for turning into new recycled products. And when paper is co-mingled with plastic food containers, it can be ruined with lingering food and beverage residues.

In 2014, nearly 40% of paper items that were put into the recycling stream went overseas.

These contaminated recyclables, unfortunately, often end up in landfills—or else they’re bought by countries with a lower standard for materials being recycled. In 2014, nearly 40 percent of paper items that were put into the recycling stream—which otherwise would have been great for making more sustainable paper products here in the United States—went overseas.

If you’ve ever wondered about the fate of your discarded recyclables, you may want to yell “Why even bother?”

But don’t trash your blue bin. Here’s how you can stop wasting your recycling efforts.

It just increases the cost of the entire recycling process by making it harder to haul and sort everything, because workers will be taking your wish-cycled items to a different destination—a trash incinerator or landfill. Learn your local recycling rules and follow them.

Putting your recyclables into a bag to carry them out to the recycling bin might seem logical, but every bag has to be ripped open at the sorting facility—a time-consuming process that holds up the sorting line. This time crunch is sometimes “solved” along the way by tossing the bags of recyclables into the trash pile.

Instead, try collecting and carrying your recyclables out to the bin in a container or box, and reuse it every week.

See if your city has special collection points for electronics or specific plastic containers to ensure they end up in the right place. Some cities even collect paper separately to protect it from contamination. Castoffs unfit for curbside collection might be perfect for a recycling drop-off at a nearby grocery or supply store. Check Earth911.com to discover what can be recycled where.

The Complete Guide to Composting
The Ocean Cleanup: The Solution to Ocean Pollution (+Video)

Recycling is an important service to our society—and our planet. If U.S. recycling levels can rise to a 75 percent participation rate, that would equal the environmental benefit of removing 50 million cars from the road each year and could generate 1.5 million new green jobs.

All it would take to turn things around and keep more of our trash out of the dump is a handful of new recycling habits.