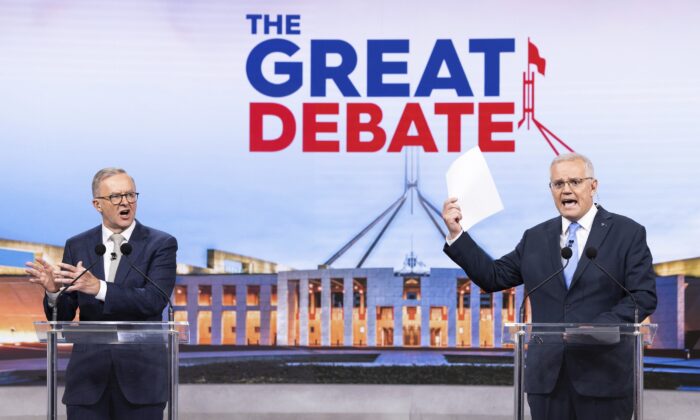 A Critical Election in the Indo-Pacific

The outcome will be critical in determining just how rapidly—if at all—China advances its interests in the Indo-Pacific and whether the new Australia-United Kingdom-United States (AUKUS) alliance moves solidly ahead.

Many members of the leadership of the ALP, including its deputy leader, Richard Marles, have been accommodating toward the Chinese Communist Party (CCP). A Labor government, should it be elected, was expected to give Beijing far more breathing space in the Indo-Pacific, including muting the Western response to China’s building of strategic bridgeheads in Southeast Asia, Papua New Guinea, the Solomon Islands, and Kiribati.

It was revealed during the final days of the election campaign that Marles—who had been groomed to become defense minister—had secretly held at least 10 meetings with CCP officials in recent years. Marles has also refused to condemn the Chinese regime’s strategic encroachments into the Indo-Pacific and has said that Australia’s fractious relationship with China would improve if Labor were elected.

The current Liberal-National Coalition government of Prime Minister Scott Morrison has said that a Labor victory would also see a slowdown of the program to increase the Australian defense budget and the size of the Australian defense force. Significantly, during the election debate, Labor leader Albanese said that his party, as the official opposition, was not briefed in advance on the details of the AUKUS treaty when it was negotiated with the United States and the UK in September 2021.

The implication, supported by the government’s comments, was that the Labor opposition would not have been trusted with the intimate details of the accord for fear of premature disclosure to the CCP. But that pre-election debate also hinted that Labor might not advance the AUKUS accords as strenuously as a Liberal-National Coalition government would be expected to do.

There are profound differences between Labor and the Coalition regarding how the economy would be managed. Labor, which would possibly need the support of the Greens in key legislation if it were to form a government, would move further to restrict the fossil fuel-based energy industry that contributes substantially to Australian exports and domestic power generation.

Under normal circumstances, the Coalition could point to the historical reality that Labor governments in Australia come to power and spend the nation into large deficits, which are then reduced or eliminated by incoming Coalition administrations. However, the past two-plus years of emergency COVID-19 management meant that Morrison’s Coalition government had built a substantial deficit to fund economic stability during the crisis period.

Morrison said that Australia had been protected from the worst economic and social impacts of COVID during recent years, but this may not help him now. Even so, the large margin of support that Labor enjoyed when the election campaign began six weeks ago has largely been eroded, leaving election day, May 21, as a day of uncertainty.

And if Labor is elected, it is even probable that the nuclear energy aspects of the AUKUS treaty—which promised the delivery of nuclear propulsion technology from the United States and the UK to the Royal Australian Navy—may be canceled or never brought to fruition. Labor’s Shadow Foreign Minister Penny Wong has promised that, if Labor won, Australia would deploy two ambassadors to each diplomatic post around the world: one a formal diplomat and the other a representative of the Australian indigenous communities.

What has been revealed so far of its nebulous program shows the Labor party true to its historical pattern, once again spending the country into greater debt. Albanese proposed a rise of one Australian dollar (about $0.68) per hour to the minimum wage, even though economists have advised that this would stimulate further levels of inflation, which would nullify the pay raise.

As well, Albanese has made clear in his electioneering that COVID suppression policies would be far from over if he took over, implying a reimposition of state-level as well as federal constraints on the movement of people, just as the rest of the world was opening to more free movement to stimulate economic growth.

Whoever wins, the margins in the federal lower house, the House of Representatives, would be razor thin, and there may be no clear party majority in the Senate. This will make governance difficult. The balance of power may, in fact, be held by the so-called “teals,” the nominal independents who have been sponsored into office by a number of wealthy benefactors and supported by groups such as the Australian version of the U.S. “GetUp” movement, with ties to American financier George Soros.

The “teals” essentially follow a Green agenda and oppose Australian energy independence through fracking and conventional extraction techniques. Clearly, these “teals,” working with the Greens, would support a Labor government and oppose a possible returned Coalition government. But there are other minor parties, such as the United Australia Party and Pauline Hanson’s One Nation, which could also hold the balance of power.

At stake is the question of whether Australia moves ahead as a liberal economy strenuously opposed to communist China’s expansionism or whether it moves toward an increasingly socialized economy that accommodates Beijing.