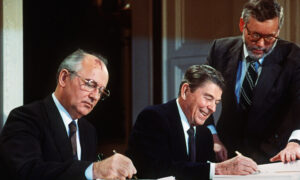 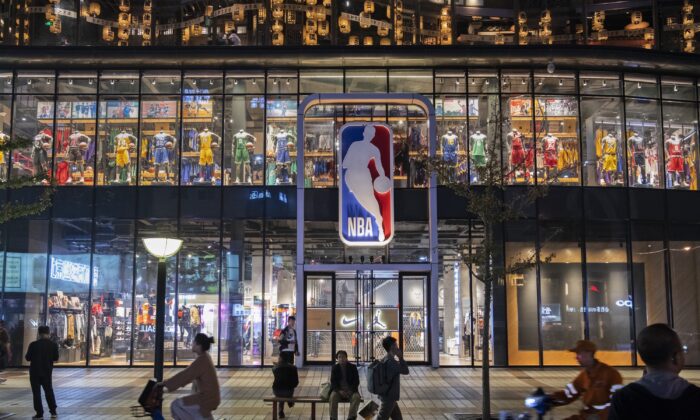 People walk by and sit outside the NBA flagship retail store in Beijing, China on Oct. 9, 2019. (Kevin Frayer/Getty Images)
Viewpoints

A Concerning Trend: Capitalist Pioneers Are Leading the Way to a Socialist Society

We are experiencing a novel and alarming phenomenon. A movement towards the left, not initiated by a monolithic communist state, but rather by a monolithic private sector. Tyranny, it has been said, arrives not with a frown but with a smile and an outstretched hand.

Earlier this year it was reported that Salesforce—a massive business services corporation—decided that it would not sell software to clients who have sales policies it disagrees with.

Specifically, Salesforce was pressuring retailers, such as Camping World, to stop selling certain types of rifles, or run the risk of being barred from using their technology.

Needless to say, private companies have the right to decide who they do business with. There is a limit, however. When a commercial enterprise enters into a business relationship, there are legally recognized obligations on both sides. And imposing one’s non-commercial related political views is hardly legally sufficient justification for causing financial harm to a soon to be former client.

If the commercial behavior of Salesforce is to be accepted as reasonable, then thereafter, any commercial enterprise can refuse to do business with any of its clients for essentially any reason.

Following Salesforce’s example, it was Nike’s decision to pull from the market its Fourth of July edition commemorative running shoes. This following a complaint by Colin Kaepernick who found the symbolism of the flag—commemorating the founding of the greatest republic in the history of the world—offensive.

Kapernick, in essence, provoked Nike to force his sympathies upon all its potential clientele. Nike did not sufficiently trust in the market forces, whereby individual consumers would be allowed to make a choice as to whether or not they chose to purchase the potentially inflammatory footwear.

Jeff Bezos, founder and owner of Amazon, has a history of inserting left-wing politics into the corporate culture, having long delegated to the Southern Poverty Law Center (SPLC) the right to vet and create a list of excluded recipients of charity as distributed via Amazon Smile. As reported by David Montgomery in The Washington Post, the SPLC’s official role in the Amazon Smile selection process is to identify hate groups for exclusion from charity.

However, Montgomery notes that along with white supremacist and neo-Nazi groups, “proponents of less immigration like the Federation for American Immigration Reform, or conservative legal stalwarts like the Alliance Defending Freedom” have made the list of “hate groups.”

In another example, Amazon removed Danish Filmmaker Michael Hansen’s Islam Documentary from its Prime TV selections. In a letter to Hansen, Amazon stated that “During a quality assurance review, we found that Killing Europe contains content that does not meet our customer content quality expectations. As a result, all offers for your title have been removed and may not be made available as “Included with Prime” or to Buy/Rent on Amazon.” Thus depriving viewers of the opportunity to form their own opinions as to its worth.

No need for government censorship when corporate heads take the lead, free of pesky Constitutional constraints.

Corporate left-leaning is not limited to the domestic arena, particularly when profits are concerned.

For example, while many professional athletes are quick to criticize the U.S., they condemned any criticism of the blatant human rights violations in Hong Kong when their own income—due to Chinese threats—were potentially in play.

Rather than rallying behind the protesters in the streets of Hong Kong, who are beaten, shot at, and imprisoned, LeBron James and his NBA colleagues were outraged by the expression of support for Hong Kong by one of the NBA’s own. Greed trumps civil rights, and profits outweigh ideology for high-profile corporate entities.

Another reliable indicator of corporate Leftward mobility is a rise in institutional anti-Semitism–in this case as reflected by corporate mutation toward compliance with the Boycott, Divestment, and Sanctions movement, known popularly as BDS. Targeting the only democracy and defender of civil rights in the Middle East, Israel, the financial and corporate supporters of BDS are at the forefront of the private sector tectonic shift toward a totalitarian society.

The self-delusion motivating the corporate advocates of a socialist regime is indeed impressive.