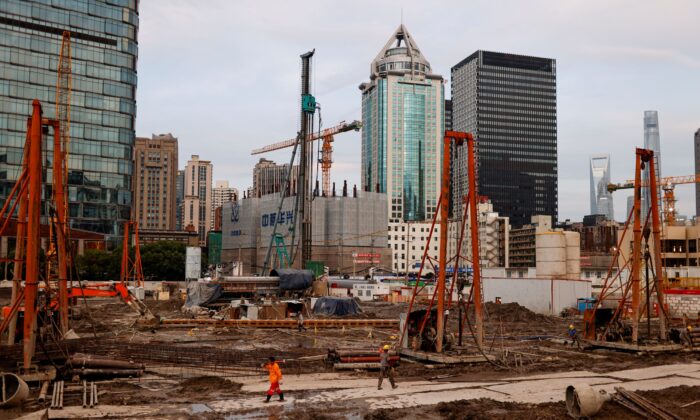 Workers labor at a construction site in Shanghai, China, on July 12, 2021. (Aly Song/Reuters)
Thinking About China

The year 2021 is a turning point for China’s economy, from growth to decline. Though at the time of writing this* China’s official annual economic statistics for 2021 have not been published, the performance of its stock market in the year shows that 2021 is a downward turn of China’s economy.

Comparing the Chinese stock markets’ performance with those of the United States, Europe, and Japan, we can see that China’s economy is now in a difficult situation.

According to International Monetary Fund (IMF), China’s GDP growth for 2021 was expected to reach 8 percent, among the highest in the world. For 2022 the IMF expects it to be 5.6 percent.

However, China’s stock performance does not support this estimate.

Publicly listed companies of a country are generally among the best and the strongest performers in its economic sectors. They are either leading monopolies in their individual industries or emerging companies with great growth potential. To a certain extent, they represent the economic strength of a country.

In comparison, the stock markets of the United States and the European Union—two major economic entities in the world—have demonstrated remarkable growth for the year 2021.

The U.S. stock markets logged the third consecutive annual growth last year, with the Dow Index up by nearly 19 percent and Nasdaq Index up by 22 percent. The Chinese edition of The Wall Street Journal reported on Jan. 4, 2022, that last year’s economic growth of the United States could be as high as five percent, better than the prediction of economists, which was 3.7 percent.

The European Commission expected the European Union economy to grow 4.2 percent in 2021, and the pan-European Euro Stoxx index went up by nearly 25 percent for the year, which was the second-best year since 2009. The French CAC 40, a benchmark French stock market index, recorded a rise of nearly 30 percent, and the German DAX, a German stock market benchmark index, had an increase of 15.8 percent.

The year-end stock market performances reveal that China’s performance is the lowest among them.

It is important to note that the Chinese stock market performance has been a result of the Chinese government forbidding its investors to invest in overseas markets and through support from Wall Street.

If the Chinese Could Buy Foreign Stocks as the Japanese Do…

More and more people in Japan tend to shift their savings to investment, but they are dissatisfied with the slow rise of Japanese stocks, so many of them are shifting their money to overseas stocks, mainly those traded in the U.S. stock markets. The Japanese financial industry is completely liberalized, and Japanese investors are free to choose to invest in domestic or overseas stocks.

If Chinese investors were to be allowed to invest in foreign stocks, China’s foreign exchange reserves would not suffice for the repayment of debts.

Game Over for China Concept Stock in US Markets: Investment Banker

Major Chinese companies have seized a fortune from the U.S. capital market by listing on the U.S. stock exchanges. Known as China Concept stock, they are still not fully accessible to American investors as regards their financial information, as the Chinese regime has rejected the U.S. disclosure requirements on the grounds of “endangering national security.”

Blindfolded American investors have to believe that the Chinese companies they have invested in have a bright future, as Wall Street offers them such a picture.

The U.S. Securities and Exchange Commission finalized rules in Dec. 2021 requiring the U.S.-listed Chinese companies to disclose their relationship with the government and audit details. The Chinese regime’s failure to follow the rules would result in a halt of trading of over 200 China concept shares in the U.S. capital markets.

David Loevinger, managing director of assets management company TCW Group, expected that most Chinese companies listed on the U.S. stock exchanges would leave the U.S. capital market by 2024, according to CNBC in a report in Dec. 2021.

“I think for a lot of Chinese companies listed in U.S. markets, it’s essentially game over,” David Loevinger told CNBC in a December interview.

Chinese shares are mainly in new economy fields such as the internet, education, technology, entertainment, and new energy, which were once favored by investors. In 2021, the total market value of China concept stocks declined by $760 billion, with 40 companies’ shares recording a nosedive of 80 percent, according to a report of Taiwan’s Liberty Times Net on Jan. 1.

However, with the new rules of the U.S. Securities and Exchange Commission effective from January, will Wall Street continue to support the Chinese stock market this year? A bigger problem is that most Chinese companies are likely to perform worse this year than they did last year due to the pandemic and the Chinese regime’s purging of education, training, technology, entertainment, and other industrial sectors. Therefore, if Wall Street investment banks continue to invest in these shares, they may still lose money.

*Mr. Cheng wrote this just before China’s 2021 GDP official growth figure, which was 8.1 percent, was released on Jan. 17.