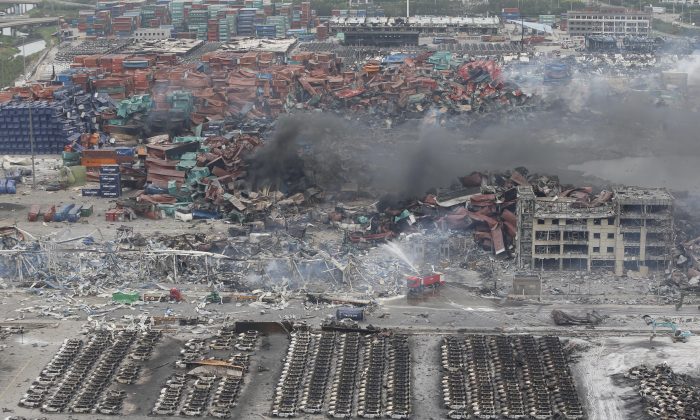 Rescuers work at the site of the explosions in Tianjin on Aug. 14, 2015. (STR/AFP/Getty Images)
China

Hundreds of tonnes of toxic chemicals may have been spilled in the wake of the fires and two enormous explosions in the Chinese port city of Tianjin on Aug. 11. The blasts were so powerful that they destroyed vehicles and shattered windows within a distance of at least one mile.

Many of the chemicals that are thought to have been spilled, burnt, or sent up into the atmosphere, are known as organic solvents, and are routinely used in industrial processes. They are toxic to humans, and some trigger reactions when mixed with water, according to Chinese reports.

Reports from Chinese media outlets indicate that the air around the site is still filled with noxious chemicals, compounded by the dust and heat. Surgical masks do little to prevent nausea and dizziness.

The Paper, a state-funded online news site, dispatched a reporter to the blast zone on Aug. 13. Within a few hundred meters of the epicenter, the individual was “vomiting constantly.”

This didn’t prevent the official Sina Weibo account of the Tianjin Binhai New Area (where the blast took place) from claiming that the air quality was “excellent,” at 4:30 p.m. on the same day, just 20 minutes after the reporter’s vomiting episode.

The disconnect between official claims and experienced reality has contributed to a torrent of frustration at the authorities for their handling of the incident.

Authorities are still unable to determine what substances caused the explosion, and little has been heard from the company—Rui Hai Logistics—that was responsible.

A a senior engineer of at the Tianjin Academy of Environmental Sciences, who was not named, was quoted in a China News Radio report saying that there are suspected to be 700 tonnes of sodium cyanide among the chemical cocktail at the site. Upon contact with water, it turns into hydrogen cyanide gas, which is highly toxic and flammable—a troubling prospect, given the predictions of rain in the coming days.