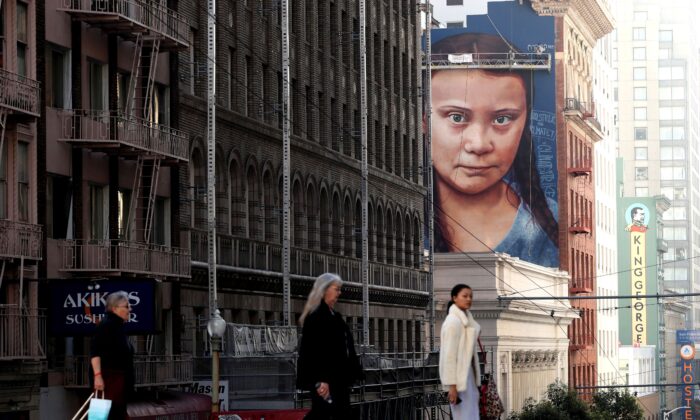 A new four-story-high mural of 16-year-old Swedish climate activist Greta Thunberg is nearing completion on the side of a building near Union Square in San Francisco, California, Nov. 11, 2019. (Justin Sullivan/Getty Images)
Viewpoints

A Climate of Ignorance: How Schools Are Failing Our Children

As a father to two children just entering the school system, I often ask myself how well they will be prepared for the world they will inherit. Will they be given the tools they need to solve complex problems? Will their minds be developed enough to discern truth from fiction? Will they learn to be measured and moral in their actions? I hope so, but I am not entirely convinced.

The best efforts of parents to produce accountable and effective global citizens can be hindered or aided by the education system. When the two work in harmony toward truth and empowerment, the next generation will have both the knowledge and mindset necessary to survive and thrive in uncertain times. But there’s increasing evidence that young people today are finding themselves ill-prepared for the existential challenges they must face as adults.

The school system is no longer the primary source of knowledge. The lineage of generational education took a quantum leap when the internet made the whole of mankind’s knowledge available at the tap of a screen. Every viewpoint on any issue, from one extreme to the other, is available for consumption. Despite its initial promise, however, mass information has not resulted in mass wisdom.

Perhaps out of a genuine but misplaced sense of morality, educators are increasingly presenting  a carefully crafted version of accepted truths while dismissing hard and uncomfortable facts, shielding students from ideas that challenge the “accepted” side of an argument. To their detriment, educational institutions have become purveyors of their own—usually progressive—ideals rather than conscientious disseminators of knowledge.

There are growing examples from the education system at all levels where certain topics are treated as untouchable, or where an incomplete set of facts lead to a foregone conclusion. A case in point is the conversation around climate change, which has veered heavily into the realm of conformist and alarmist thinking.

The so-called fight to curb climate change has spurred many youth to action, motivated by teen activist Greta Thunberg. Mobilizing to bring about positive change is commendable and teaches young people to be more than passive observers when it comes to important issues.

As for the climate debate, however, relevant facts that conflict with the prevailing narrative go unacknowledged and are even attacked.

Dr. Susan Crockford is an expert in animal bone identification and polar bear researcher who has written five books on the animals. She suspects her May 2019 dismissal from the University of Victoria was because her findings that polar bears are not facing extinction runs contrary to the claims of climate change activists.

The loss of her position as assistant professor in the Anthropology Department followed her expulsion from the roster of UVic’s Speakers Bureau, where she once delivered a lecture to high school and elementary students titled, “Polar Bears: Outstanding Survivors of Climate Change.”

Crockford’s research found that, despite broad assumptions to the contrary, polar bear populations are on the rise and actually thriving. Instead of being a cause for celebration and intrigue, this news threatened the status quo. If Crockford’s suspicions about her expulsion are right, her research was deemed too politically incorrect for students. She suggests on her blog that “someone with influence (and perhaps political clout) intervened to silence my scientific criticism.”

Because Crockford poked a hole in the prevailing narrative, she had to be silenced. This kind of reaction does not serve students well.

Petteri Taalas, the secretary-general of the World Meteorological Organization, recently voiced concern that the climate change conversation has been hijacked by climate extremists and their calls for radical action.

“Now, we should stay calm and ponder what is really the solution to this problem,” Taalas told the Talouselämä magazine in Finland. “It is not going to be the end of the world. The world is just becoming more challenging. In parts of the globe, living conditions are becoming worse, but people have survived in harsh conditions.”

His statement, along with his denunciation of “doomsters and extremists” who “make threats,” was a call for rationality in the climate debate. Instead, he was vilified by radicals in the environmental movement.

The point is not to argue about the science of climate change but to reinforce the crucial need for keeping an open mind when thinking through important issues. Holding to a factually incomplete, politically correct side of an argument despite conflicting evidence leads to irrational decisions.

The school system should recognize that and not be afraid to present students with balanced facts and perspectives around issues like climate change so that they can make informed decisions and come to their own conclusions.

Like all parents, I have an intrinsic desire to protect my children from the hard truths of the world, but I know that those same hard truths hold the key to the realization of their full potential.

Given the trend toward indoctrination in schools, one can only hope that teachers and educators will bear the burden of their position wisely and help forge a generation of empowered critical thinkers and moral actors.