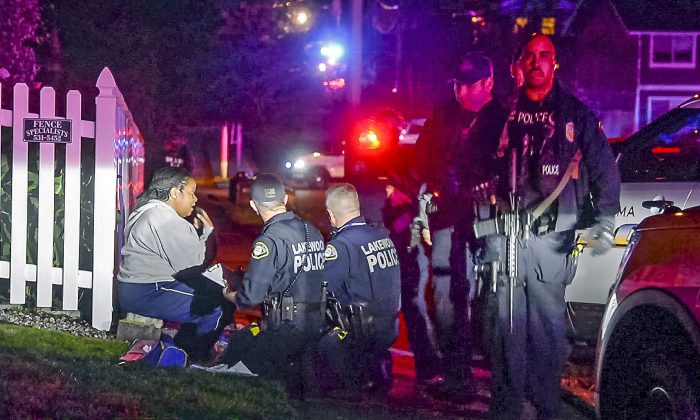 Police stand by a distraught Kristi Croskey at the scene where a Tacoma Police officer was shot while responding to a domestic call in East Tacoma, Wash., on Nov. 30, 2016. (Peter Haley/The News Tribune via AP)
Politics

SEATTLE—A Washington state police officer responding to a domestic violence call was fatally shot and his fellow officers were still “taking fire” as they removed him from a home, beginning an 11-hour standoff during which authorities say the gunman used two young children as human shields.

The fallen officer, Reginald “Jake” Gutierrez, had served with the department since 1999 and was highly respected and experienced, Tacoma Police Chief Donald Ramsdell told reporters Thursday.

Dozens of officers had surrounded the home in Tacoma on Wednesday night, urging nearby residents of the working class neighborhood of single-family homes to shelter in place.

Early Thursday, authorities say a deputy got “a clear shot” and killed the suspect as officers rescued an 8-year-old girl and a 6-year-old boy.

Pierce County sheriff’s spokesman Ed Troyer said the gunman had refused to surrender during negotiations. His name was not released.

“We were able to get the suspect cornered and trapped, even though he had two kids,” Troyer said. “We had a SWAT member who had a clear shot. We fired one round, which struck him.”

Ramsdell said the incident began Wednesday afternoon when animal control officers working near the house were approached by a woman who said her husband had locked her out and taken her phone. The officers called police.

Gutierrez and his female partner went into the home, and Gutierrez was shot as he reached the top of the stairs to speak with the suspect, Ramsdell said.

The female officer shot back and ran from the house, taking the wife to safety.

“We had an officer down and shots still firing at the time,” Cool said. Police managed to get the officer out “but they were still taking fire,” she said.

Officers didn’t immediately know there were children in the house and became aware of their presence during the standoff, she said.

“When they were able to rescue the boy, there was an opening to rescue the girl,” Cool said. “That provoked the shot to take the suspect out.”

Authorities discovered multiple weapons inside the house but did not describe them in detail. Few details were released about the treatment of the children by the suspect.

Ramsdell said the suspect did not have a “serious background in regards to criminal history” but there may have been issues with mental illness.

Kristi Croskey, who rented the house to the suspect and his wife, was inside the home at the time and barricaded herself in the bathroom before she was able to escape, KOMO-TV reported.

She said police came to the residence because the suspect was fighting with his wife and refused to let her back inside.

“They said they just wanted to talk to him and then gunfire started, they didn’t start it,” Croskey told the station.

Reacting to the shots fired, officers entered the home and managed to get the wounded officer outside and to a hospital, Cool said.

The shooting sparked an outpouring of support from the community and public officials, who left flowers at the front of the police department, under a large police badge carried a black ribbon across the center.

A procession of law enforcement officers escorted the officer’s body from the hospital to the county medical examiner’s office.

Washington Gov. Jay Inslee said “all of Washington grieves with Tacoma, which tonight lost one of their finest.”

The shooting remains under investigation by multiple agencies, including the FBI and the Pierce County Prosecutor’s Office, which will review material to be sure that the police followed their policies in responding to the incident.