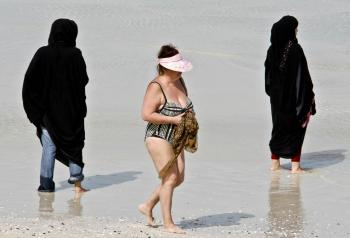 Stephen Jones
biggersmaller
Print
DUBAI, United Arab Emirates—The taxi driver leaned forward in his seat as a blond western girl in a short skirt walked in front of the car.

"Even 15 years ago women could not wear such clothes in Dubai," said the driver, a middle aged Pakistani who claimed to have lived and worked in the city for 25 years.

"People would catch her, and they would rape her," he said, making a grasping action with his hands.

I didn't ask him whether it was common; I didn't like the glint in his eye.

For many long-term residents of Dubai—the business hub of the mostly Sunni Muslim United Arab Emirates—the changes, which have engulfed the emirate in recent years have been tremendous.

In the last 10 years the city has literally doubled in size, extending from where the now defunct Hard Rock Cafe once marked the end of civilization and the beginning of the desert.

The rapid development of Dubai marked an exponential boom in the economy—which caused thousands of western expats and tourists like Paris Hilton to flock to the emirate.

However, the new wealth is often viewed as a mixed blessing for locals. Last week, I wrote how a conservatively-dressed local woman approached a British tourist in a mall to lambaste her over wearing a skimpy outfit.

The tourist—reflecting typical "Brits abroad" mentality—reportedly told the woman to mind her own business, before stripping to her bikini in an act of defiance.

As is typical with the British press, who are quick to highlight how apparently unreasonable authorities are in Dubai, one tabloid newspaper reported that the woman had been charged with indecency.

I spoke with police officials, who confirmed that although the woman had been questioned, she had neither been charged nor formally arrested.

Although the narrative that informed the story came to dominate the facts, it is not without a basis in reality.

In 2008, two British residents were sentenced to jail after an alleged incident involving having sex on the beach.

According to the prosecution, the woman—heavily inebriated—allegedly swore at a police officer who politely asked them to move on, and was said to have thrown a shoe at his head (the worst insult in Islam).

The case came to dominate headlines around the world, and for many represented the existential crisis facing Dubai.

Is it a liberal, open, beachfront city filled with bars and wild nightlife? Or is it a deeply conservative Muslim state that publicly advocates morals with a seemingly arbitrary application of the law?

The truth is that Dubai is both. On the one hand serving alcohol is legal, while being under the influence in public is an offense.

While it is technically illegal for unmarried couples to live together, the practice is common throughout the western districts of the city and authorities turn a blind eye to the issue.

Sex outside of marriage is strictly forbidden, but prostitution is utterly endemic in the majority of the city's five-star hotels.

Dubai has tried its best to live in two worlds—the Western, so as not to alienate a talented foreign workforce; and the traditional, so as not to sow dissidence among the local population.

The seemingly arbitrary application of the law, owes largely to the fine line that authorities walk in attempting to appear fair to the city's two irreconcilable worldviews.