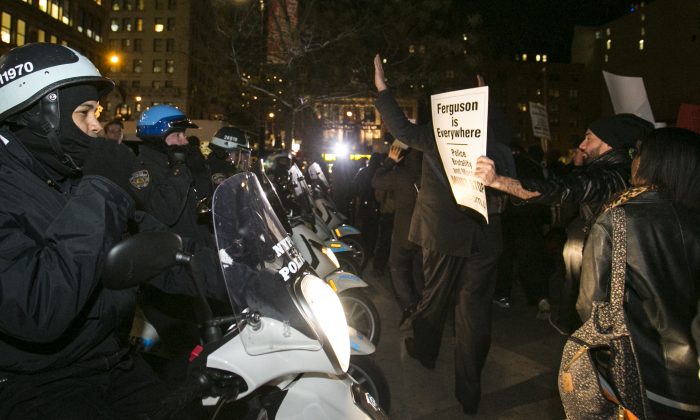 A City on the Brink

New York City’s anti-cop activists are scrambling for cover now that two NYPD officers, Rafael Ramos and Wenjian Liu, have been slain in cold blood on a Brooklyn street by a suspected gang member seeking revenge for the deaths of Michael Brown and Eric Garner.

For the last several weeks, Gotham has been the scene of nightly, inflammatory protests against the NYPD. An assortment of self-proclaimed social-justice activists have disrupted traffic, assaulted officers, and demanded an end to Broken Windows policing. The city’s progressive elites, including Mayor Bill de Blasio and City Council Speaker Melissa Mark-Viverito, have accommodated the protesters—offering them aid and comfort in the media, entertaining their wilder claims, and standing silent as they defamed the NYPD as racist killers.

Last weekend, demonstrators marched through the streets of Murray Hill chanting, “What do we want? Dead cops! When do we want it? Now!” They didn’t have to wait long. Ismaaiyl Brinsley had posted threatening anti-cop messages on Instagram in the hours before the double murder. “They take 1 of ours . . . let’s take 2 of theirs . . . #RIPEricGardner#RIPMikeBrown,” he wrote.

Under the circumstances, no clearer motive, nor indication of guilt, is imaginable. Yet, Al Sharpton said it was “reprehensible” that anyone would link the killings to Ferguson or Staten Island. Since Brinsley himself made that link, it seems fair to ask: Doesn’t the good reverend know it’s impolite to speak ill of the dead? (Brinsley turned his gun on himself as cops closed in.)

At a Saturday evening press conference, Mayor de Blasio said that the motive for the killings was unclear—showing the same curious abundance of caution that led him to declare last week that protesters on the Brooklyn Bridge had “allegedly” attacked two police officers, despite a video clearly showing the assault. The mayor’s knee-jerk anti-cop sentiment led him to spend an hour listening to the grievances of Harry Belafonte’s Justice League NYC, which had pledged to shut down Fifth Avenue on Tuesday as a means to ending the “war on black America.”

After a Staten Island grand jury declined to hand down indictments of the police officers involved in Eric Garner’s death, the mayor told reporters that he had urged his biracial son to “take special care” during encounters with the police. “Are [kids like Dante] safe from the very people they want to have faith in as their protectors?” he asked. The city’s progressive elites identify not with the brave men and women of the NYPD, but with the cops’ detractors.

Not surprisingly, the NYPD is sick of what Bob McManus calls de Blasio’s “split the baby strategy” of appeasing the protesters while courting cops’ support. They turned their backs on the mayor Saturday when he entered Woodhull Hospital, where the slain officers had been taken. “They praise police with words and then take actions that clearly demonstrate their true lack of support for the very people who protect them and make their communities safe,” New York City Patrolmen’s Benevolent Association President Patrick Lynch said.

The PBA recently circulated a letter for its members to sign asking both the mayor and Mark-Viverito to “refrain from attending my funeral services in the event that I am killed in the line of duty.” Trying to mend fences, Mark-Viverito visited an NYPD station house in her neighborhood last week for morning roll call, telling cops, “I appreciate what you do.” She was not greeted warmly.

The rank-and-file officers at the 23rd precinct evidently remembered her marching with Sharpton at his National Action Network’s anti-police-brutality rally in August. Perhaps they also recalled her support for legislation accusing cops of engaging in “bias-based profiling” and complaining of a two-tiered justice system—one for cops and one for everyone else.

An institution can absorb only so much slander. Are the cops overly sensitive to criticism? If so, they have good reason: like officers Liu and Ramos, they put their lives on the line every day. They go to work every morning knowing that this could be the day they don’t come home. Not many of us can say that we understand what that feels like. Certainly, few of the angry undergraduates and middle-class trustafarians shutting down freeways and lying down in the middle of Grand Central know anything about it.

Bill de Blasio’s New York is an upside-down world, where a police force responsible for transforming a crime-plagued metropolis into the safest big city in America can be openly defamed—and where two more NYPD families will spend Christmas in mourning.