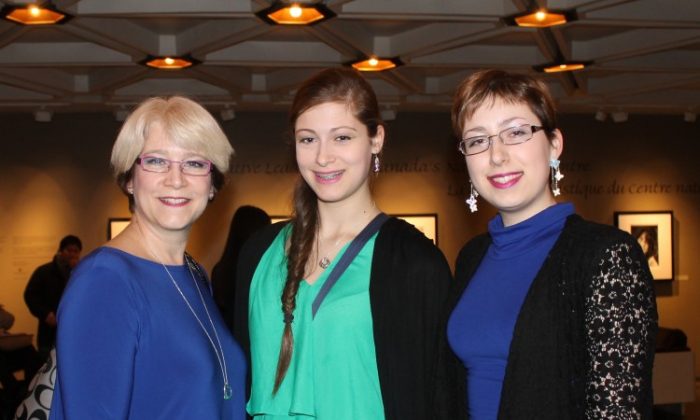 A Christmas Gift Worth Waiting For

Linda Chapman and her two daughters enjoyed a great Christmas gift on Sunday afternoon when they took in Shen Yun Performing Arts’ last Ottawa show of the season. The final matinee performance at the National Arts Centre brought a close to the company’s successful Ottawa run, where sold-out and full-house shows and standing ovations were the norm.

“I’ve been waiting to see this show for years and years and we’ve all wanted to see it, so this year I finally decided to buy the tickets as a Christmas gift and it was definitely worth the wait,” said daughter Stephanie.

The three were thrilled with the performance.

Mrs. Chapman, who is a manager at Global Knowledge, a firm specializing in IT and business skills training, called the performance wonderful.

“We were talking about how wonderful the dancers were, how flexible they were, and how strong they were,” said Mrs. Chapman, referring to the techniques of the Shen Yun dancers.

The hallmark of Shen Yun is classical Chinese dance, an art form that is thousands of years old and extremely rigorous, as it involves not only classical poses but also many difficult tumbling techniques.

“Well, when you can just lift your leg over your head and hold it, you have to be pretty strong,” said Mrs. Chapman, smiling.

Her daughter Erin, who is a dancer and a student at Ottawa University, was also amazed at the feats of the dancers.

“I thought it was great. I’m a dancer myself so it was nice to see different styles of dance. And they were very strong and flexible, and all the tumbling and acrobatics, it was great,” she said.

The costumes were another standout aspect for the three, who marvelled at the beauty of the outfits worn by the dancers.

According to Shen Yun’s website: “Every costume in a Shen Yun performance is presented with brilliant colours, displaying a splendid spectacle. They use bright colours to tailor and recreate hundreds of new pieces each season. Every detail is given meticulous attention and is a result of artistic inspiration and careful polishing.

“We just thought the costumes were absolutely gorgeous,” said Mrs. Chapman. “They were quite beautiful.”

New York-based Shen Yun Performing Arts has three touring companies that perform simultaneously around the world. Shen Yun’s New York Company will be in Montreal Jan. 3-6 before going on to Quebec City, Toronto, and other cities in eastern Canada. For more information, visit ShenYunPerformingArts.org