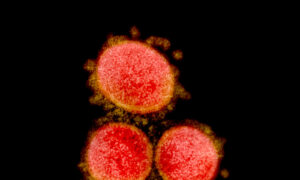 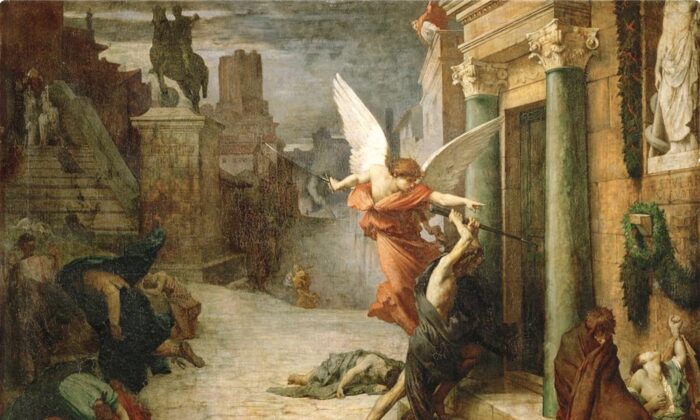 "The Plague of Rome" by Jules Elie Delauney.
Viewpoints

America is looking for ways to combat the CCP Virus, and there may be hints for us in our history of what to do.

Years ago, I was deeply impressed on seeing the painting “The Plague of Rome” by Jules Elie Delaunay.

The artwork describes how divine vengeance brought a plague to Rome. In the painting, plague-stricken figures lie in torment in the streets, while to the right, a good angel commands a bad angel to strike with his spear the homes where the plague will enter.

The artist took inspiration from a passage in Jacobus de Voragine’s 13th-century “Golden Legend,” “And then there appeared a good angel, who commanded a bad angel, armed with a pike, to strike the houses, and each house had as many dead as the number of blows on the door.”

History records that during that time, sometimes a whole family perished in the plague, save one. A survivor was said to hold a dead body and to plead for death to take him, too, but he never got infected. And so, just as in the painting, the plague seemed in real life to choose its victims.

This ancient understanding saw the world as moral. Goodness was rewarded, and evil was punished.

Similar to the West, the ancient Chinese believed that the virus or plague has eyes and selects its victims. It targets certain people who have made specific mistakes.

Ancient emperors would go outside to humbly plead to the Divine, promising to correct their own mistakes and asking that their people not be punished. By admitting their mistakes, these emperors sought to reject what was bad in their conduct and to adopt a more righteous standard. Time and again, such action effectively stopped disasters. Often, the kind people survived the plague.

Right now in China, there is a quiet wave of people who are seeking, like the ancient emperors, to change their fates by rejecting what is evil and affirming what is good.

Some people have been calling each other and reminding each other to urgently withdraw any affiliation with the Chinese Communist Party (CCP).

The CCP has ruled China for over 70 years, and every family in China has a story about the evil they have suffered at its hands. The Party’s record includes the unnatural deaths of 65 million (according to the “Black Book of Communism”—some estimates are higher, and some lower), the expropriation of lands and businesses, the brainwashing of the people with communist doctrine, the destruction of China’s traditional culture, the attempt to uproot religion, and much more.

To remain silent in the face of the Party’s monstrous evil is to be complicit in it. By denouncing the Party, one rejects that evil.

Some people have recovered from the CCP Virus after denouncing the CCP.

One can see the same mechanism at work on a large scale in the cases of Taiwan and Hong Kong. In a recent national election in Taiwan, a landslide result rejected closer ties to the CCP. And Taiwan has had amazingly low cases of the virus.

Similarly, over a period of months the Hong Kong people held massive demonstrations rejecting the CCP, and there are relatively few cases in Hong Kong.

People denouncing the CCP and recovering from the virus, or rejecting the CCP in Hong Kong or Taiwan and not getting infected, may sound far away from us in the West. But, actually, in this globalized world, we are closer to the CCP than one might imagine.

The CCP could have fallen apart years ago, setting Chinese people free, except for the money and support it received from the West. How many of us have joined in this work, knowingly or unknowingly?  If you are sick from the virus, maybe you can give it a try: denounce the CCP, and see what the effect is. Since this virus is from China, this Chinese method might help you to beat the virus.

There is another quiet wave in China of people finding a way to defeat the CCP Virus. The word is spreading that reciting “Falun Dafa is good” and learning the practice’s exercises can quickly cure the infection.

Falun Dafa (also known as Falun Gong) is an ancient practice that teaches meditation and living according to the principles of truthfulness, compassion, and tolerance. A recent survey shows 40 percent of Americans practice some kind of meditation, but they may not know about Falun Dafa.

In the late 1990s in China, one hundred million people had taken up this practice. Unfortunately, some members of the CCP’s leadership feared that so many people—more than the membership of the CCP—were practicing Falun Dafa.

Seeing that the Party was getting ready to suppress Falun Dafa, the retired head of the nation’s domestic security forces did a nationwide survey and reported to the Politburo that Falun Dafa does “no harm and only good.”

Nonetheless, the CCP began persecuting Falun Dafa in July of 1999. But Dafa has spread all around the world, and there are testimonials in dozens of languages to the good it does. Those who support Falun Dafa are supporting something very good.

A friend of mine’s uncle and aunt in Wuhan are both doctors, and have been seriously ill with the CCP virus. He told his uncle to recite “Falun Dafa is good” and learn the practice’s meditative exercises. His uncle miraculously recovered after he tried this.

He then told his wife, who was in the hospital. She was more stubborn and did not believe this could work. Reluctantly, she tried. Later on, it became clear to her that when she practices the exercises, her fever goes down. When she stops practicing, her fever goes up. Initially a skeptic, she became totally convinced that this method is effective.

A student was ill with the CCP virus. Her mom practices Falun Dafa and urged her to recite “Falun Dafa is good” every day. In despair, she tried, and she recovered. She happily wrote about her experience on the internet to share with friends.

These experiences and methods are not known widely yet. Try and find out for yourself.