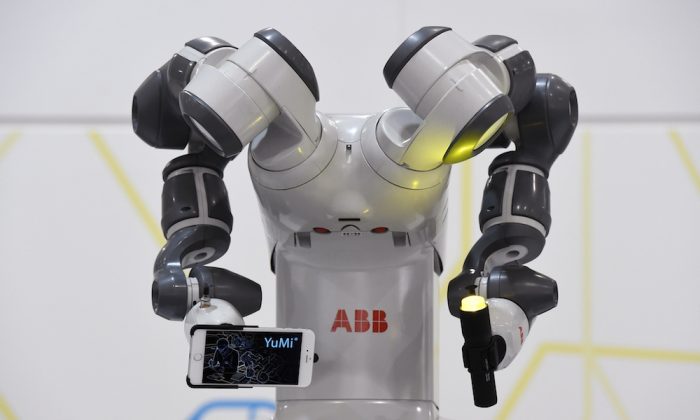 A collaborative dual-arm robot YuMi holding a smartphone and a torch is on display at the Hannover Messe industrial trade fair in Hanover, central Germany on April 13, 2015. Few made in China products were in the limelight at the fair. (TOBIAS SCHWARZ/AFP/Getty Images))
China

A Chinese Entrepreneur’s Rude Awakening at a German Manufacturing Fair

Editor’s note: The following article was recently published on a website devoted to discussing advanced manufacturing in China. It later could not be found on that site, possibly having been censored or removed by the author. Written by a Chinese businessman, the piece is a vivid account of his experience at Hannover Messe 2015, the world’s largest industrial trade fair, held in April. The author uses his disappointing experience at the fair to reflect more broadly on China’s social and moral malaise. An archived version of the piece, posted to Sina Weibo on Aug. 1, is here.

This was the fourth time I had attended the Hannover Messe in northern Germany. It is the world’s largest and most comprehensive annual industrial trade exhibition. We were there to promote an e-commerce platform website in Shaanxi. During my stay, I was surprised to notice “Made in China” had been marginalized.

Likewise, products exhibited by foreign companies were large in size but refined in their details. They were carefully designed, innovative, and difficult to manufacture. Chinese products, on the other hand, looked old-fashioned, clumsy, low-tech, and unpolished.

There were 6,500 exhibitors from 65 countries and regions and more than 180,000 foreign visitors. However, barely anyone visited Chinese booths. Some visitors reacted with impatience when Chinese vendors tried to introduce their products to them.

Previously, I always dismissed articles about moral decay in China. But after the week at Hannover Messe, I came to realize the serious damage to work ethics caused by decades of moral decline.

We went over to the high-tech exhibit halls 7, 8, and 9 to take a look at the leading-edge products, including a variety of high-precision analytical and testing equipment. Intelligent robots have been developed very fast by hundreds of companies. There were eight categories of robots, designed to perform tasks from grabbing large automobiles to installing small watch parts. Their performances were dazzling.

To my surprise, I did not see one single Chinese company there! Many of our businesses brag that “our products have reached or exceeded the world’s advanced level.” How come they were not there to compete?

I also noticed that many visitors did not trust products made in China. They either showed contempt or were afraid of them. In order to promote our website, we visited all exhibition halls and talked to many customers. Not many people were interested in Chinese companies. They did not pay much attention. Some even said, “We do not do any business with Chinese companies, please stop!”

Quick Profits and Lack of Integrity

We felt very embarrassed. Several years ago, products made in China were the top pick of many countries and regions. Why are Chinese products being ignored and marginalized now? After quite some introspection, I came up with a number of reasons.

One is the drive in China for GDP and quick profits. For years, China has been focused on GDP. The government cared only about increasing GDP or achieving its GDP goal, without caring about how it was realized. It resulted in imitation and blind expansion of production. People were not in the mood to engage in research, innovation, and new product development. There was no spirit of work ethics or pursuit of perfection. Driven by quick profits, people did not have an interest in taking time to learn. A heritage of corporate culture, technological development, management, and workers’ skills was not being fostered and passed down in China.

Lack of moral integrity and responsibility is another reason why products made in China cannot compete in the world market and are being shunned. Previously, I always dismissed articles that decry the problems and consequences of moral decay in China. But after the week at the Hannover Messe, I came to realize the serious damage to work ethics caused by decades of moral decline.

Additionally, collaboration between universities, research institutions, and enterprises in China has been poor over all these years. Many cases of fake and false research reports have made matters worse. A series of projects were made up to obtain research funding from the government. The projects brought minimal results, thus no one wanted to put in the time, effort, and money to conduct additional research into a new technology or a new product that didn’t look promising to begin with. People just cannot wait for future returns.

The Hannover Messe has forced me to think a lot. It made me realize that the crises of integrity, morality, and humanity in our society has finally resulted in an image crisis of our products and manufacturing industry in the global market. We are being marginalized in the global market, and “Made in China” is in great peril now!

This is an abridged translation of an account by Song Chaopeng, originally published on the website of the China Advanced Manufacturing Technology Forum, a site in which Chinese entrepreneurs and manufacturers discuss their trade. Song Chaopeng is the president of Shaanxi Allstate Tech&Trade Co., Ltd. and editor of productsx.net, an e-commerce platform.