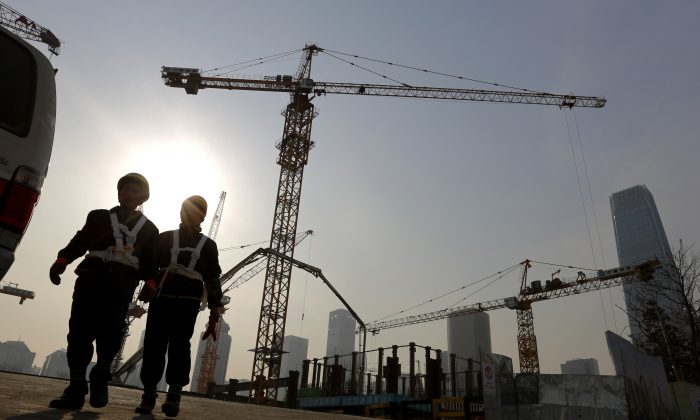 Workers walk out from a construction site at the Central Business District of Beijing on Jan. 20, 2015. (Andy Wong/AP)
China

A Chinese Entrepreneur’s Plea for Rationality

Chinese entrepreneur Guo Xueming shares his experience partnering with Japanese business investors in China. This is a direct translation of his account posted to his Wechat account on March 7. — Epoch Times translation team

One day in October 2012, Matsumoto Moria, the Japanese Consul General in Shenyang, invited me to eat with him at the Japanese restaurant inside the Isetan Department Store in Shenyang. He wanted to know my take on the anti-Japanese demonstrations, including the smashing of Japanese cars, that were taking place in various parts of China.

Mr. Matsumoto advocated friendship between Japan and China. As a diplomat, he actively helped China attract Japanese investment. I met him at the groundbreaking ceremony of the Modern Architecture Industrial Park in the spring of 2010. Soon after, he came to my company to see me.

During our first visit, Mr. Matsumoto wanted to know how I was able to bring two top Japanese companies, Kashima Group and Lixil Group, to China in just a few months. These were Fortune 500 companies and top construction and building materials enterprises. Japanese companies are very conservative, and Kashima, founded in 1840, is even more conservative, he said. Our company was registered in October 2009, and we signed contracts with Kashima in December 2009, with the relatively small registered capital of 100 million yuan (US$14.5 million).

“Your company was set up only a couple of months ago. How did you introduce them to China?” Mr. Matsumoto asked.

I summarized the three main points for Mr. Matsumoto.

One: The city of Shenyang has a diameter of 200 km. This construction area is equivalent to the total building area in Japan.

Three: Although our company was very small, our team members were all entrepreneurs and familiar with the market. Japanese companies that want to invest in China need a partner who understands the market.

What business cares most about is the market. Japanese companies came to China’s market. We signed contracts with Kashima, which brought Lixil. They also brought 17 affiliated companies to investigate the Chinese market.

However, during our meal at the Japanese restaurant, Mr. Matsumoto commented that with China’s anti-Japan sentiments, many Japanese companies had reservations about the prospects of investing in China. He asked for my perspective, as a Chinese entrepreneur, on the future trend of Sino-Japanese business cooperation.

I was very optimistic and told him that China’s three decades of development had benefited from the open-door policy. The future wouldn’t diverge from this policy.

Furthermore, consumers are very practical. There was no need to worry that there wouldn’t be a market for good products, I assured him. Nationalist emotional outrage and pragmatism in shopping are not the same thing.

And finally, those who boycott foreign products and smash cars on the streets don’t represent most Chinese people, I told him.

Mr. Matsumoto agreed with my analysis. He talked to me about the Japanese government being sincere about Japanese-Chinese friendship and about clearing Japanese companies’ doubts about China. He also talked about a plan to build a Japanese road in the Hunnan district of Shenyang to provide a favorable environment for Japanese businessmen there, and he invited us to invest in the road.

Shortly after my meeting with Mr. Matsumoto, a young man who had smashed a car in Xi’an was sentenced to prison. But Japanese companies remained sensitive, realistic and conservative; it did not help much to create a more optimistic attitude.

As their partner, we tried to find viable solutions. I asked twice to hold talks with the high-level executives of the three companies to study the issue of product adaptability in China and solve operational difficulties. But they refused to talk. They did not even listen to solution proposals. They were determined to withdraw and bear the financial and credibility losses. This was clearly not a decision based on cost. They had lost confidence in China’s market discipline. If a business is confident about the market, it will first think about solutions to problems instead of closing down without even listening to any solutions.

Kashima and Lixil left. Although we took over their technology and team and carried on, it was difficult to get expected returns from the tens of millions invested. Our team’s dozens of trips to Japan to negotiate—which we took great pride in—came to nothing. Our dream to build safe, earthquake-resistant residential housing in China based on Japanese architectural norms was difficult to achieve in the short term.

Chinese people are the biggest losers.

I do understand the Japanese firms. Investor confidence is based on predictability. If a country’s market is not determined by the key economic element of scarcity, but instead by uncertain factors, such as political, diplomatic, and nationalistic emotions, it will shake the confidence of foreign capital. Those with capital are not willing to risk it in an environment that offers no security.

The most important foundation of the market economy is the protection of private property. Customers are resources that are part of that property, and they are the only source of return on investment. Encouraging boycotts of products is in essence encouraging infringement and deprivation of property rights. If non-economic factors of resistance are regarded as legitimate and correct, and often happen in a society, it will fundamentally shake the foundation of a market economy.

While China’s anti-Japan protests were brief, companies see what they imply. Just like seeing a maggot in the corner of a room, one’s immediate conclusion is that the room itself is dirty.

In recent years, many foreign-funded enterprises have withdrawn from China. The Isedan, where Mr. Matsumoto invited me for dinner, also went bankrupt. The success rate of introducing foreign investment has substantially declined. Of course, there were many factors. By sharing my own experience, I just want to remind everyone of the harm we inflict when we direct our patriotic sentiments toward foreign companies.

I think politicians and diplomats should garner the wisdom, means, and patience to resolve disputes between countries. They should not motivate the public to smash foreign cars, or boycott foreign supermarkets or foreign fast food chains, which undermines the overall open-door policy and the basis of the market economy.