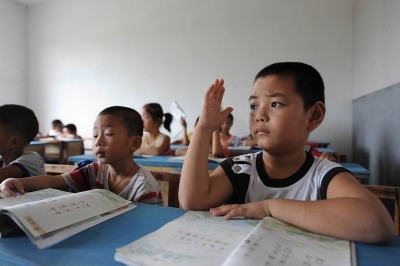 Chinese elementary school students learning a language. Chinese parents can be relentless when it comes to filling their children’s schedule with extra-curriculuar activities, so their children can “win at the starting line.” (Getty Images)
China

Little Lele, a six-year-old girl from Wuhan, the capital of central China’s Hubei Province, showed how much pressure she had been under to excel when she failed a top private elementary school’s entrance exam: she cried so hard that she passed out.

Such intense feelings of disappointment may seem unusual for a six-year old, but are not totally unexpected in China. Lele’s family expended years of effort to prepare her for admittance to this specific school, and Lele had shown nothing but extraordinary talents, according to a blog posted by her mother (Jul 24, 2013).

At age four, Lele had memorized over 100 ancient poems, and could ride an 18-inch-wheel bicycle without training wheels. At six, she was solving junior math Olympic questions. Lele is also good at skating and skateboard, thanks to training from her grandpa.

But the school’s entrance test seems to have been too easy for Lele—she failed the test. To make things worse, her cousin, who had shown little talent at anything, was accepted. Upon hearing the results, Lele cried until she passed out.

Her mother’s blog attracted many readers and comments. While many people expressed sympathy, others blamed the parents and problems in society.

“I think it’s the adults’ fault,” one netizen wrote. “Such a young child passes out from crying just because she is not accepted by a school. The family must have been telling her every day that she needs to work hard to get into that school, what a tremendous pressure!”

China’s generation of one-child children are sometimes called “little emperors.” They are said to be very spoilt but also under a great deal of pressure to satisfy their family’s expectations, make them feel proud and take care of them in their old age.

With the slowing economy and a highly competitive job market, fear of losing out further drives parents to pressure their children to study hard and focus on academic scores, school ratings, and technical skills.

Translated by Michelle Yu. Written in English by Gisela Sommer.