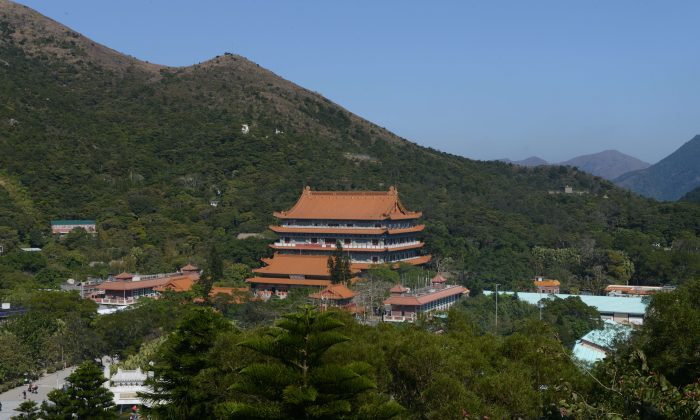 This picture taken on Feb. 23, 2014 shows the exterior of the Po Lin monastery on the outlying island of Lantau in Hong Kong. (Sam Panthaky/AFP/Getty Images)
China

Over the past two years, Communist Party leader Xi Jinping has carried out an anti-corruption campaign, and more than 90 percent of the officials that have been sacked followed former CCP leader Jiang Zemin in the persecution of Falun Gong. These include high-ranking officials such as Bo Xilai, Su Rong, and Zhou Yongkang. It seems these officials are now meeting retribution for their crimes against Falun Gong.

In Hong Kong, some politicians and celebrities have also followed the CCP in persecuting Falun Gong. This series of articles describe how these individuals are now often suffering misfortune.

The scandal also involved confusion in the monastery’s financial management.

Sik Chi Wai, chief monk of Po Lin Monastery and president of the Hong Kong Buddhist Association, was involved in the fake marriage incidents. He has also been involved in slandering Falun Gong.

Sik Chi Wai became a monk at the age of 30 at Po Lin Monastery, and he became the chief monk in 2005. He was elected as one of the Hong Kong deputies to the 9th National People’s Congress (NPC) in 1997 and re-elected in 2002. This year he was awarded the Silver Bauhinia Star by Hong Kong Chief Executive Leung Chun-ying’s government.

Jiang Zemin attended the third session of the Ninth National People’s Congress in March 2000, and Sik Chi Wai discredited Falun Gong during the meeting. Sik Chi Wai then told CCP mouthpiece media in an interview that he supported the ban of Falun Gong, and Jiang affirmed his speech.

Today the tables have turned. In addition to being involved in the fake marriage scandal, Sik Chi Wai is stepping down from his post as chief monk.

After the scandal was made public, a large number of media rushed to interview Sik Chi Wai during a public event on Oct. 16.

Another monk, Sik Kin Chiu, met the media after the event. He said Sik Chi Wai decided to step down because of his brain hyperemia (excessive blood in the vessels supplying the brain) and other health issues. Jing Yin, director of the Centre of Buddhist Studies at the University of Hong Kong, will take over.

Po Lin Monastery is one of the largest temples in Hong Kong. It has been reported that the temple’s 2013 financial report showed that the monastery had assets of HK $1.216 billion (US $157 million).

Its annual donation income was HK $74 million. Other income, including from sale of vegetarian meals and souvenirs, amounted to HK $78.49 million. The monastery holds several real estate properties, and it invests in the stock market with a value of HK $250 million.

The media also revealed that in August 2014, Sik Chi Wai sold three adjacent units on the 3rd floor in Po Wah Building, Wan Chai district, in his own name, cashing out HK $27.23 million.

Although Sik Chi Wai lives in Hong Kong, he has followed in the footsteps of people such as mainland Chinese monk Shi Yongxin to persecute Falun Gong.

Shi Yongxin, chief monk of Shaolin Temple, was recently reported by other monks for his illegal identity card, adultery, violation of temple regulations, and embezzlement of temple assets.

He has been accused of being a political monk of the CCP who was promoted by Jiang Zemin’s trusted subordinate, former CCP Buddhism Association president Zhao Puchu. Zhao Puchu and Shi Yongxin actively followed Jiang in slandering Falun Gong.

Some commentators believe that the high-profile disclosure of Shi Yongxin’s scandal is associated with the current anti-corruption campaign against Jiang. Shi Yongxin followed Jiang in damaging traditional Chinese Buddhism and led the way in suppressing and defaming Falun Gong.

Buddhists believe in karmic retribution, and it seems the time has come for Shi Yongxin to receive his.

According to the Buddhist tradition, Buddhist disciples should not care about matters of ordinary society. However, Sik Chi Wai’s title indicates his close relationship with the CCP.

During his time as chief monk, Po Lin Monastery has had a close connection with the United Front Work Department of the CCP. Under the influence of Jiang’s corruption, some of Hong Kong’s Buddhists have changed dramatically.

Current affairs commentator Lee Yee wrote in an article that some listeners called D100 Radio and informed them that Po Lin Monastery has been under the influence of the CCP since 1997. The original monks were excluded and marginalized, and the current CEO and monks are officials from mainland China.

“These officials came to Hong Kong through different channels (including false marriages) and then became fake monks in Hong Kong. Of course they will not comply with fasting or with rules cautioning against lust,” Lee stated.

Mary Jean Reimer, one of the directors of Ting Wai Monastery, held a press conference to expose the sham marriage scandal to the public. She said in the conference that Sik Chi Ding’s fake marriages were only the tip of the iceberg, and they might have been manipulated by a group of people. Legco member Leung Yiu-chung has said there might be a mafia behind these monks.

Lee Yee stated in his article, “Hong Kong Buddhist communities have been under the control of the CCP.”

Lee said the atheist communist regime does not believe in any religion, but suppresses and destroys the true beliefs of other people.