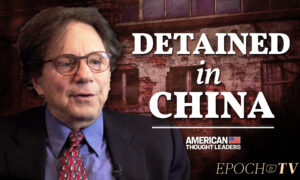 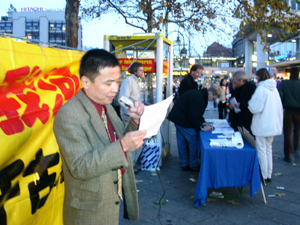 Mr. Yu Lisheng gives a speech at the assembly of the Global Coalition to Bring Jiang to Justice in Berlin, Germany on November 26, 2003 (The Epoch Times)
China

GERMANY – Mr. Yu Lisheng, a former clerk in the Field Army Special Forces of the CCP Air Force, withdrew from the Chinese Communist Party back in 1990, long before there was a nationwide movement to do so. On August 1, 2005 Mr. Yu published his withdrawal statement on The Epoch Times‘ Tuidang (Quit the CCP) website. Later, he agreed to an interview with The Epoch Times to discuss his decision to quit the Party, and to comment on the growing worldwide movement of withdrawals from the CCP.

Yu joined the Field Army Special Forces of in the CCP Air Force in 1978 and was soon recognized as a model clerk. After four years military services, Yu retired from the army. He went to work for the government and then pursued a career as a journalist. He is currently employed as a journalist for Beijing Spring magazine in Germany.

Though Mr. Yu took the brave step of withdrawing from the CCP in 1990, he now wishes the world to hear his public renouncement of the CCP.

Reporter: Could you talk about why you quit the Party in 1990?

Yu: At that time I was working for the Communist Party, and the way they went about doing things started to really disturb me; I just couldn’t get used to it. It was impossible to work for the CCP and uphold my personal standard of truthfulness and justice. This was especially so during the June 4th Massacre. Not only did they kill all of those innocent students, they lied about it to the rest of the world. They went against both conscience and generally acknowledged truth. As mentioned in The Nine Commentaries, the CCP tried to reinvent itself after the Cultural Revolution, not because it had seen the error of its ways, but rather to allow it to grab even more power and control in the new national climate. The Nine Commentaries has had a very positive effect on the Chinese people, awakening them to the CCP’s history of unpardonable crimes and its attempt to erase China’s 5000 years of culture and history.

Reporter: Can you explain your decision to publish your withdrawal statement on The Epoch Times website? Also, is there a special significance to your choosing to do so on August 1st?

Yu: To answer the second part of your question, August 1st is Army Day for the Chinese Communist Party. Throughout its bloody history, the CCP has relied on its army to maintain its power. The army has become the consistent tool of the CCP and is totally under its control.

Recently, following Major General Zhu Chenghu’s speech regarding nuclear deterrents, the entire world went into an uproar and expressed unanimous opposition towards it. As of today, within the CCP itself there has been no open opposition to the speech against world peace and civilization. Zhu’s intent was to intimidate and threaten as a means of retaining control; this is the same bully mentality that the CCP has used since its inception.

“…intelligent Chinese must realize that without political reform our country has no real future; that the economic growth is a mirage.”

The CCP is hoping that the threat of nuclear attack will allow them to achieve their ends in the Taiwan issue without having to go to war. In fact, this tactic is highly irresponsible and does indeed destabilize world peace.

So, I chose August 1st in order to draw attention to the way the Chinese military has been used by the CCP throughout history, and to highlight how it continues to be the major pawn of the Party’s attempts to dominate the world stage.

As for why I want to publish my statement with The Epoch Times, it is to have my renouncement of the CCP publicly known, and to add the weight of my resignation to growing worldwide trend. Since withdrawing from the CCP in 1990, I have come to further understand just how evil it is; particularly in the way that it has used its military to crush all opposition and maintain its dictatorship. I also want the world to know that from its treatment of its citizens to its running of the nation, the CCP does not enjoy popular support.

Also, I want the people of China to realize that although the economy has been flourishing, the condition of the country has in fact continued to worsen under the CCP rule. We intelligent Chinese must realize that without political reform our country has no real future; that the economic growth is a mirage. I hope that more Chinese citizens will break away from the Chinese Communist Party by withdrawing from the CCP and its associated affiliates and choose to live a peaceful life. If more of us are able to this, then we, as a nation, will surely be able to cast off the dark shadow of the CCP.