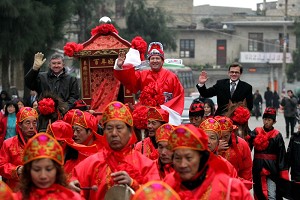 Among the groom's procession are three Caucasians riding on horses. (The Epoch Times)
China

On February 9, 2008, a wedding procession with people donning Tang Dynasty-style clothing, along with fanfare and drums, passed through the streets and alleys of Pingtan County, Fujian Province. Among them were the Caucasian groom and best man mounted high on horseback.

According to Straits City Daily, Steven (the groom) met Lu Deying (the bride) at a trade fair in Guangzhou 10 years ago. Steven is from Lyon, France and has been working in China. Lu, a Beijing Foreign Languages University graduate, currently works in foreign trade. After falling in love and being with each other for over 10 years, they finally decided to tie the knot.

Lu originally wanted to have a Western-style wedding, but her husband changed his mind saying “Now that I'm sure I was destined to marry a Chinese woman in China, we will do away with the idea of the Western-style ceremony.” As both sides' friends highly approved of the idea, over 10 foreigners came to help out and observe the Chinese-style wedding ceremony.

Throughout the ceremony, the bride was marveled at her new husband's inquiries about the different traditional Chinese customs that he kept observing. While removing the palanquin, Steven spotted a saddle and a fire pit in front of him. After a brief hesitation, he asked, “What are these for?” The master of ceremony explained that the saddle symbolized peace as it has the same pronunciation in Chinese as “peace,” while the fire pit is to burn bad luck away and brings a bright future.

Before the groom held the bride to cross the saddle and brazier with care, Western guests sat on the ground and took endless photos of the new couple. They recited traditional Chinese chants for good luck and prosperity.

After paying homage to Heaven and Earth, the couple was escorted to the bridal chamber. There, they sat on the edge of the bed to wait for the auspicious hour to unveil the bride. When the time came, Steven accepted a “good luck steelyard.” Steven once again asked, “What does this symbolize?” Lu explained that the steelyard was a weight-measuring instrument used in ancient China. It has the same pronunciation as “get what one has wished for.” She then smiled and asked him to figure the rest out for himself. It was actually to be used to unveil the bride's red head covering and carefully place the beads, from the phoenix crown, to the right position. Steven then unwrapped the red wrappings layer by layer.