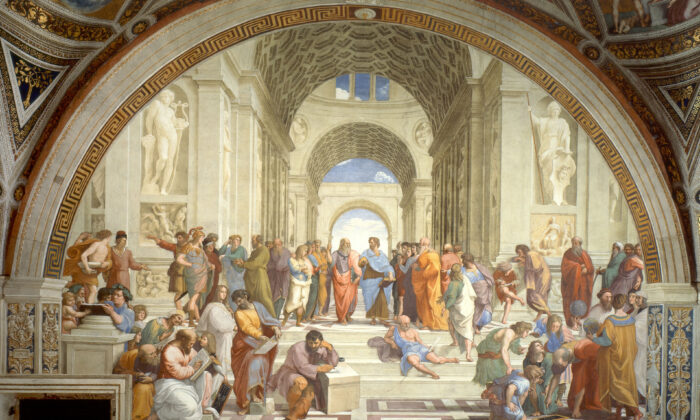 “The School of Athens” fresco by Renaissance artist Raphael depicting the Platonic Academy, a famous school in ancient Athens founded by the philosopher Plato in the early 4th century B.C. In the center are Plato and Aristotle, in discussion. (Public Domain)
Viewpoints

Exploring the Link Between Self-Control and a Nation’s Prosperity

With the modern shift toward defining morality as fluid, subjective, and personal, we have sacrificed important guideposts for understanding the ethics that make a society successful. These ethics and morals have been distilled through the generations and should not be cast aside lightly.

For centuries, Western culture largely subscribed to the Judeo-Christian ethical framework from which it emerged. Other cultures held to their traditions as well. But in recent decades, particularly after the counterculture movement of the 1960s, that framework has eroded to the point that it has become almost fringe.

Most traditional cultures and religions bear remarkable similarities in their prescriptions for living a moral life. In that light, it’s worth considering the meta characteristics that enabled the gene pool to survive. No race, nation, or ethnicity has a monopoly on the creation of great civilizations. They have manifested on every continent at one time or another, from the Persian Empire to the ancient Greeks to dynastic China.

Notwithstanding a few nihilistic individuals, every citizen of every country hopes to be part of a civilization that prospers and enriches its citizens while perpetually enlightening, elevating, and refining itself.

Although moral laws that limit pleasure and enjoyment are seen as antiquated in today’s society, there is solid evidence that they maximize the human experience in the long run. When a higher value is placed on the pursuit of meaning over the pursuit of pleasure, the miraculous elements of civilization tend to emerge.

There are few subjects as fraught with landmines as the subject of sexual morality. Unable or unwilling to adhere to rigorous moral protocols, most governments, as well as many religious institutions, have chosen to be less prescriptive in their requirements. This has been largely embraced as a sign of progress and civil liberty. But modesty and sexual constraint, to one degree or another, have historically been proven to have significant bearing on the flourishing of a society.

Sexual freedom is a barometer of the general moral restraints of a culture and an accurate indicator of the citizenry’s willingness to postpone instant gratification for the pursuit of larger, more noble goals. The fall of the Roman Empire and the collapse of ancient Greece were immediately preceded by periods of decadence and indulgence. The genesis of these great civilizations, however, was just the opposite, characterized by vigour, restraint, and the pursuit of a moral life.

When discussing such an intrinsically sensitive subject, it is best to go straight to the historical record to see how this phenomenon has played out over the course of history.

British social anthropologist J.D. Unwin examined the data from 86 societies to probe the relationship between sexual freedom and the flourishing of cultures, documenting his findings in his book “Sex and Culture.” It should be pointed out that Unwin’s book was published in 1934, long before the sexual revolution of the West. There is little evidence that he was a particularly religious man, and his work can be regarded as a relatively unbiased look at how sexual freedom influenced cultures across continents.

Unwin examined cultures that ranged from embracing strict chastity to absolute polygamy, and every nuance in between. What he found was that increased sexual constraint tightly correlated to the flourishing of a culture, and that total sexual freedom led to societal collapse. He studied this data across time and found that unrestrained sex led to societal collapse within three generations.

“Any human society is free to choose either to display great energy or to enjoy sexual freedom; the evidence is that it cannot do both for more than one generation,” Unwin wrote.

Prescribing any type of sexual morality is likely to be rejected outright in today’s age of individual liberty, but it is worth considering how keeping our desires in check and delaying gratification can help society in the long run by invigorating the populace into constructive action.

The Promise of Restraint

The moral standards that were once prescribed and accepted as self-evident are continually portrayed as quaint, outdated, and irrelevant. As such, we no longer have external factors controlling our drive for gratification. By doing away with religion and replacing it with moral relativism, we have left ourselves to our own devices as well as our own conscience. Anxiety, depression, and discontent are on the rise across the world, despite the wonders of our age and the promise of our times. Of course, the reasons for this are many and varied, but perhaps we should consider whether we have been duped into accepting a pseudo moralistic attitude that promises material fruit while eroding our conscience and vitality.

Sexual morality is not simply a restrictive doctrine aimed at suppressing nature’s impulses. Using that powerful biological drive to actualize human potential has long been prescribed by sages across cultures. Daoists believe that the sexual essence of one’s body can be transmuted into vitality and life extension. In his book “Think and Grow Rich,” Napoleon Hill prescribed sexual transmutation as a way of channelling the sex drive into other creative efforts, harnessing that energy as a tool for great achievement. Fighters have a long tradition of refraining from sexual relations before a fight, knowing how it can sap their strength and endurance.

If we would like to see our civilization survive and flourish, for the sake of ourselves and future generations, we would do well to remember that our degree of self-control will ultimately determine our success. It’s an intrinsically potent power, and ours for the taking, but it doesn’t come easily. Sacrifices must be made, and from Unwin’s research, we can see that we can only “have our cake and eat it too” for a short time before things go awry and we are left diminished.