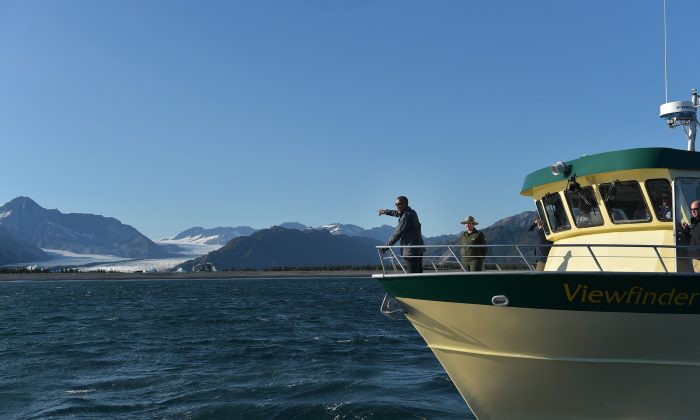 A Carbon Tax in Waiting: We’re Not Adapting as Fast as Climate Is Changing

Although football and fall are in the air, it’s worth the time to reflect back to President Obama’s two trips he took just before Labor Day to New Orleans and Alaska. The locations are thousands of miles apart and the weather could not be more different, but the visits had one common theme: the impacts of climate change.

As an academic and as a former director of the Navy’s Task Force Climate Change, I understand the many aspects of risk related to climate change. Obama’s trip emphasized for me the importance of adapting to the components of climate change that are already inevitable. An analysis of the trip also highlights the costs of adapting – or responding – that we are paying today and will pay tomorrow.

I can boil down what we’ve learned from the presidential trips to three climate takeaways: it’s all about the water; we need to respond now; and, alas, it won’t be cheap.

From New Orleans to Alaska, the focus was on climate impacts relating to water. Along the Gulf Coast and in the Arctic, rising sea levels and associated higher storm surges were a focal point of each visit.

Each coastal location, though, deals with its own specific water challenges. For the Gulf Coast, an increase in hurricane intensity, when combined with rising sea levels, means already dangerous storm surges become even more destructive and lethal. Along the Bering Strait and in the Arctic Ocean the issue is not hurricanes but rather the significant loss of sea ice. This lack of ice means there is more open water. Open waters in turn allow bigger and more powerful waves to form during storms and erode the soft beaches, endangering long-standing small towns and settlements.

In Alaska, thinning and melting of sea ice, melting of glaciers and disappearance of permafrost will cause fundamental changes in both ecosystems and the very lifestyles of indigenous peoples. Native people’s water supplies, critical transportation venues and even their physical communities are all under threat.

Climate impacts in the north are not limited to ice, though. Alaska is dealing with ever more ferocious wildfires, caused by rising temperatures drying out the formerly cool, damp forests. These fires impact air quality and any buildings that might be in their path, and even contribute to permafrost melt.

Meanwhile, along the Gulf Coast temperatures continue to rise, stressing people, animals and crops. When it rains, the rainfall is more intense, leading to more flash flooding, while coastal freshwater supplies are threatened by saltwater seeping in from an ever-higher ocean.

Unfortunately, there are few cheap solutions to dealing with the above-listed impacts. The post-Katrina New Orleans levees cost US$14.6 billion to date – and there are already reports that sea levels are rising at a rate that will force another redesign of the system in a few decades. The costs in Alaska are similarly stunning: relocating the dozens of small coastal villages may cost around $100 million per village.

The dramatic changes in the Arctic are also forcing the United States to consider seriously its investment in overall Arctic capabilities. The president promised to expedite building a new icebreaker for the Coast Guard, to take advantage of opening shipping lanes in the melting Arctic and provide a year-round US presence on Arctic waters. While very welcome news, it’s only the tip of the, well, you know.

Ports and other improvements to ensure the safety of shipping in the far north such as better navigation charts and weather forecasts will add much more to the budget. These costs do not even consider the potential increased costs for any Arctic security posture we may be required to invest in, depending on the actions of Russia or other adventurous countries.

The bottom line is we have yet to make even our initial down payment funding the most basic adaptations to the changing climate.

The president stated correctly that the climate is changing faster than we are adapting to it. To adapt to the changing climate, to rising seas, to bigger floods and to increased heat stress and drought will cost hundreds of billions of dollars over the coming years.

The alternative is to walk away from major cities and infrastructure, as some experts have suggested. We did not do that following Katrina or Sandy, and it would be political suicide to even hint we would not protect Houston, Miami or the Sacramento Delta region, to name just a few places.

Our challenge is that the science tells us the weather and oceans are only beginning to change. If the world does not soon enact meaningful cuts in greenhouse gas emissions, the cost of adapting to the changing climate will become staggering.

The president’s trips already showcased tens of billions of federal dollars in the rebuilding of New Orleans and its levees and the implied commitment of billions more to Alaska. This is just the beginning of a carbon tax we are paying now: a tax that no one got to vote on.

All roads Lead Through Washington

The magnitude of the challenge and the budgets that will be required ensures the path for long-term solutions to the climate challenge ultimately goes through the Congress. While the administration has been helpful through the bully pulpit and executive policies, only the Congress can pass laws and has the power of the purse.

Local, state, regional and even Executive Branch efforts by themselves are useful steps in the right direction, and can accomplish much. However, lasting solutions require both resources and laws to address the root causes of climate change and adequate funding to prepare the nation for what lies ahead. This will happen only when the Congress is onboard.

In summary, the president’s visits to New Orleans and Alaska were very useful. He shined the spotlight of climate impacts on two very different parts of the country and focused, for a few days, the national conversation around a changing climate and its impacts. He acknowledged that much more must be done, and that the climate is changing faster than our response to it.

Now, though, it is time for the hard work to begin. The president needs to work with the Congress in a nonpartisan manner to meet this climate threat, moving beyond the polarizing rhetoric, and putting in place laws that fund both the needed adaptations to protect ourselves from the coming changes and move us to sustainable, non-carbon-based energy sources – all while sustaining our economy and way of life. As we tragically saw in South Carolina, the weather extremes will not pause while we put our policies in place.

So did the president’s trips make a difference? Will the needed actions happen in the run-up to a general election? The jury is still out. However, the sooner we start that journey, the less pain we, and our children, will endure.