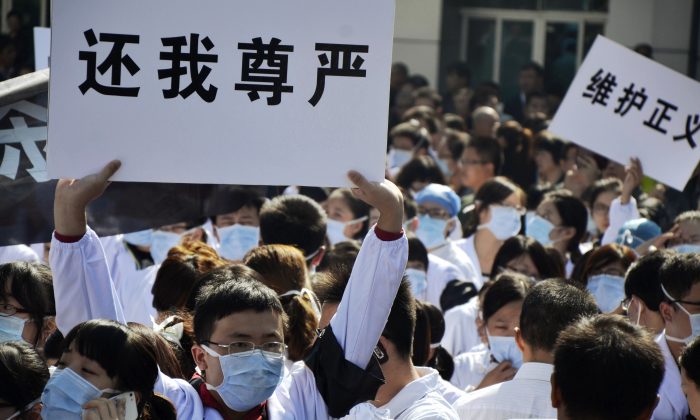 Hospital workers hold banners as they protest against attacks on medical workers outside the No. 1 People's Hospital in Wenling, east China's Zhejiang province, on Oct. 28, 2013. The relationship between patients and hospitals has often been characterized by mistrust, and sometimes outright violence. (Jin Yunguo/AFP/Getty Images)
China

When a patient with advanced lung cancer died at the First Affiliated Hospital at Hunan Medical University, outraged family members immediately blamed the doctor and nurse for being too slow. So they smashed the furniture in the doctor’s office, beat her, dragged her to the bed of the deceased patient, slapped her around the face, and forced her to kneel down and apologize.

“I just felt that I was treated worse than an animal,” Dr. Wang told the state-run Hunan television, sitting on a hospital bed with a gauze bandage around her head, shedding tears as she recalled the incident.

The nurse, Mrs. Tan, five months pregnant, wasn’t spared the rage of the deceased’s family either: after the beating she received, doctors thought she might have a miscarriage. She’s now in hospital herself.

The outburst in Hunan in early June was the latest major ruction in China to call the public’s attention to an ongoing tangle of issues that have plagued the medical system for years: rampant corruption among medical practitioners, primitive to nonexistent dispute resolution mechanisms for allegations of medical malpractice, a nonexistent medical liability insurance system, and above all, seething distrust among patients toward doctors and nurses, itself a reflection of the wider dynamics that bedevil Chinese society as a whole.

The panic at patient violence has made one thing certain, though: doctors and nurses now come prepared.

“We all take pepper spray and self-defense batons to work now, just in case,” a nurse in the emergency room of a hospital in Hunan told the state-run Xinhua News Agency recently.

A doctor at the First Affiliated Hospital, where the June incident took place, said: “I work at the emergency room where medical disputes happen most … I’m afraid that patients may beat me someday.”

The outburst in Hunan was not a one-off. Similar chaos took place at the private Shanxia Hospital in the wealthy Shenzhen City of Guangdong Province this May.

The trouble there started with the death of a patient after nine months of treatment. The family claimed that the hospital was responsible, and demanded compensation. The hospital refused. So family members of the deceased set up a mourning hall outside, and began lighting firecrackers. They would harass the doctors entering and exiting, and even began throwing manure on them.

The hospital started with a staff of 500, but only 200 were left by the end of it, Chinese reports said.

According to China’s National Health and Family Planning Commission, there were 17,000 incidents of patients harassing doctors in 2010, a trend that has increased rapidly.

China has no developed system for resolving medical disputes, though authorities are working on such plans. The type of medical liability insurance, widely adopted in Western countries, is still at the pilot stage in limited areas around China. One outcome of this is that when medical malpractice allegations, or a medical dispute, arise, patients and their family members directly focus on applying pressure to the hospital, doctors, and other medical staff to gain compensation. Their boldness and violence has only increased.

“No fight, no compensation. Small fight, small compensation. Big fight, big compensation,” has become a kind of guiding motto for patients when dissatisfied with the treatment they have received, a number of doctors told state media.

The current dispute resolution process, relying on doctor-patient consultation, administrative mediation, and civil litigation, is costly and takes months or years—something that frustrated patients have little appetite to wait around for.

Angry patients have even been reported to hire thugs and members of the mafia to beat and humiliate doctors and nurses.

Expensive, overcrowded, and ineffective hospitals are blamed for some of the problems. “Too difficult and too expensive” has become a common refrain about hospital treatment in China. Guo Yanhong, deputy director of the Hospital Authority at the National Health and Family Planning Commission told Chinese media that the lack of medical resources, service, and an insurance system lie behind the disputes.

“Large hospitals are overcrowded with patients,” she said. “So they go to the third-grade hospitals. It actually reveals issues of our resource allocation, lack of high quality doctors, and the problems in our systems.”

The immense level of corruption in the medical sector does not help. Handing out “red envelopes” stuffed with cash is a common step in obtaining medical care in China. Nurses will often advise the patient’s family members in an ad hoc manner on how much cash is appropriate; the money is paid in an attempt to ensure that the patient will receive adequate care by the doctor, but also contributes to the atmosphere of mistrust in the relationship between patients and hospitals.

Chinese health authorities have tried to crack down on the practice, implementing a “no red envelope” policy that doctors and patients need to sign before treatment, beginning in May 1 this year, according to state-run China News. The nature of this form of corruption makes it difficult to know whether such policies have much an impact, however.