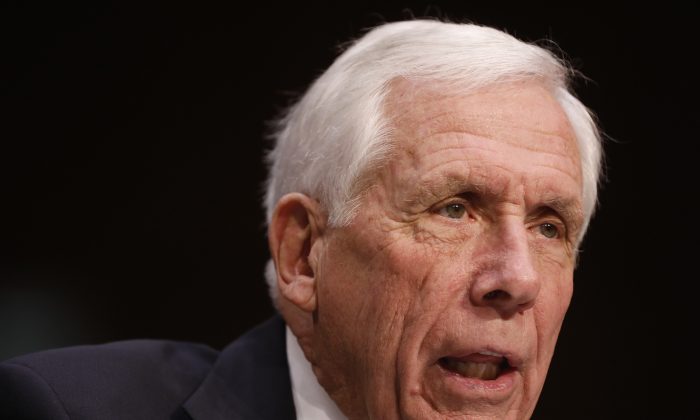 A Call in Washington to Hear the Voices of the Oppressed

WASHINGTON—The man described by U.S. Ambassador for International Religious Freedom Sam Brownback as the godfather of the movement in the United States to protect religious freedom gave a deeply personal call to care for the world’s persecuted faithful at the conclusion of the first day of the Ministerial for International Religious Freedom on July 24.

Retired Rep. Frank Wolf spoke to try to arouse the willingness to hear the voices of those who are oppressed. He quoted Simon and Garfunkel’s “The Boxer” to describe the problem: “a man hears what he wants to hear and disregards the rest.”

And he paired that with Ecclesiastes: “I saw the tears of the oppressed, and they had no comforter. The oppressors had the power.”

While Wolf gave examples of religious persecution from all over the world, including the Rohingya of Burma, the Yazidi of Syria and Iraq, and the Coptic Christians of Egypt, he dwelt on the persecution in China.

Wolf’s litany included Protestant pastors being jailed, Tibetan monks immolating themselves to protest cultural genocide, hundreds of thousands of Muslim Uyghurs being herded into concentration camps, and Falun Gong practitioners being killed and having their organs taken.

After asking whether we should be burdened by the great injustice of religious persecution taking place around the world, Wolf answered his question by saying, “For me, as a follower of Jesus, scripture gives little choice but to respond.”

Then, his voice broke, he stopped speaking, and his eyes seemed to tear. The audience responded with prolonged applause.

With quotations from the book of Hebrews, Elie Wiesel, William Wilberforce, Dietrich Bonhoeffer, and Martin Luther King Jr., Wolf reached his conclusion: “We can never again say we did not know. When we leave today let us commit that we will speak and we will act.”